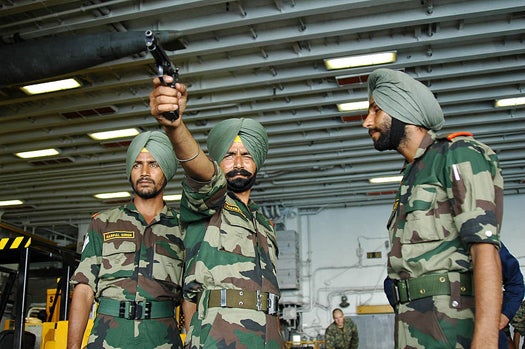 India’s Defense Research Development Organization thinks it may have found a new secret weapon: an 82-year-old holy man named Prahlad Jani. His tactical advantage: longevity. Jani claims via the UK’s Telegraph that he has not consumed food or drink for 70 years, and military authorities are conducting a rigorous study to see if he’s onto something they could use.

Skeptical? You should be. Medical science says — and there’s some variability here based on differences in metabolism, environment, etc. — that after 3 to 5 days of fasting your glucose levels get seriously out of whack. If you’re still hanging around at day 50, you’re tougher than most. That’s if you’re drinking water. If not, “your body can survive a maximum of 3 days without the intake of water, assuming you are at sea level, at room temperature, and a relative humidity,” says Bruce Zawalsky of the Boreal Wilderness Institute. That’s a far cry from seven decades.

But Indian authorities seem to think Jani could be on to something, and they’re trying to find out exactly what it is.

Currently, Jani is on day six of a 15-day observation session in which he has yet to eat or drink (or perform any of the usual bodily processes that follow ingestion of liquids and solids) according to Indian authorities. And so far, his body has not shown any adverse effects commonly associated with hunger or dehydration.

Jani claims to have left home as a child, living in the streets of Rajasthan as a holy man who lives on spiritual force alone after being blessed by a goddess. He also claims that his body is supported by a hole in his palate, through which the goddess pours a spiritual potion that keeps his body ticking. Naturally he’s been called both holy and a fraud, but the fact is he’s still humming right along under strict medical observation.

Indian military agencies are interested less in Jani’s tales of spiritual blessing and more in mental or physical techniques he could teach soldiers and civilians. They think he could help keep disaster victims hanging tough until help arrives (don’t forget India has a large impoverished population that lives in a global neighborhood renowned for vicious monsoons) as well as keep troops in the field longer. From a special forces perspective, there’s a certain luster to putting operatives in the field for extended periods without requiring a supply chain.

Indians are known to fast for up to a week at a time in observance of religious traditions, so Jani’s six days certainly don’t prove anything. In a similar 2003 trial he underwent a 10-day observation session in which independent sources confirmed he consumed no food or water. But those results were later placed in doubt, since Jani did lose a little bit of weight in the final days.

So is Jani a holy man, a natural anomaly, or neither? Safe money says there’s some kind of hoax afoot here — and we certainly don’t think he’s gone 70 years without food and water — but all that really doesn’t matter. If the man really does go a full 15 days without sustenance and doesn’t show any signs of wear or tear, the Indian military may learn something valuable from him anyhow.