Big Brother was watching before, but soon he’ll bewatching with a whole new set of high-tech eyes. The Department of... 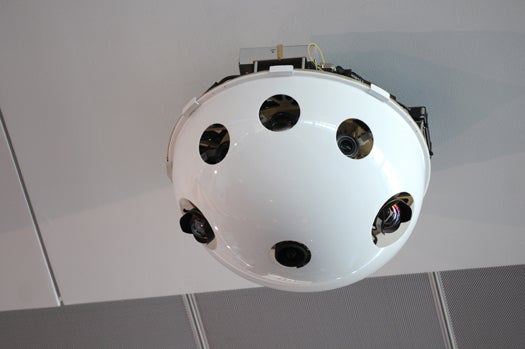 Big Brother was watching before, but soon he’ll bewatching with a whole new set of high-tech eyes. The Department of Homeland Security’s Science and Technology Directorate (S&T) is creating a wide-eyed new camera system that captures video in 360 degrees, stitching together video in real time to provide a sweeping view of a secured area, which technicians can zoom into while still keeping one eye on the big picture.

The Imaging System for Immersive Surveillance, or ISIS, is less a wholesale breakthrough and more a combination of various video surveillance technologies into a single package that can be bolted to a ceiling or mounted on a high vantage point. Rather than employing a single camera, each ISIS module packs several individual cameras, allowing it to provide high-resolution video from edge to edge of wide vistas.

To do so, it relies on state-of-the-art video stitching technology that pulls disparate video feeds into one seamless picture in real time. Total resolution capability reaches 100 megapixels — the equivalent of 50 full-HDTV movies playing simultaneously — offering ISIS technicians to take in huge scenes with extreme clarity. Overlap between video feeds and a unique interface allows them to focus in on a particular person or point while still maintaining a view of the larger picture.

On top of the hardware magic, a collection of software apps are being developed that will allow ISIS to perform other high-tech tasks, like create exclusion zones that ISIS monitors automatically, alerting security personnel if the area is breached. It also will allow operators to tag a target, following a person or object moving across the landscape, panning and tilting as needed to keep visual contact with the target.

ISIS is being tested at Boston’s Logan airport, but DHS is already eyeing a second-gen version of the system that has more sensors, longer-range cameras, infrared capabilities, and a more discreet frame that is smaller than a basketball. Which means that, unlike Orwell’s Big Brother, this one could be watching and you might not even know it.