Molten metal may not be what you want in your smartphone battery, but it turns out to work great for... 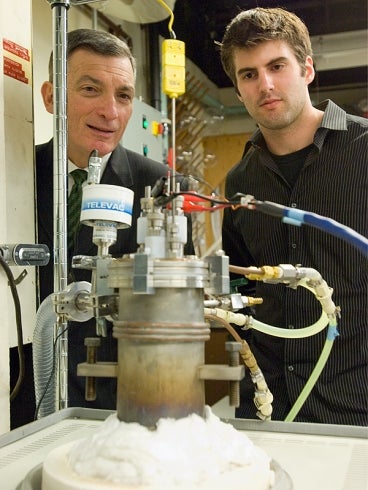 Molten metal may not be what you want in your smartphone battery, but it turns out to work great for larger grid-scale batteries. MIT engineers have created devices that can provide up to 20 times as much current as lithium-ion batteries with the same electrode area, according to New Scientist.

The new battery simply consists of tanks filled with three liquid layers kept at 1,292 degrees F (700 degrees C). Molten magnesium sits on top, and antimony sits on the bottom. The middle layer consists of a compound mixture of the two outer layers.

Charging the battery with electricity breaks down the middle layer, and thus enlarges the upper and lower layers, while discharging reverses the process, in a chemical reaction that releases electrons to provide power. Once running, the battery also creates enough self-sustaining heat to keep everything deliciously molten.

A battery as large as a shipping container could deliver a megawatt of electricity, or enough to power about 10,000 100-watt light bulbs for several hours. Its cheaper material costs compared to lithium make it a more cost-effective candidate for scaling up the power grid.

Some utility companies and cities have already turned to sodium sulfur batteries as backup power that can ease reliance on the aging transmission grid — the Texas town of Presidio recently charged up the largest battery of this type in the U.S. But the molten metal battery technology could provide part of a newer energy infrastructure that supports a growing variety of renewable energy sources.