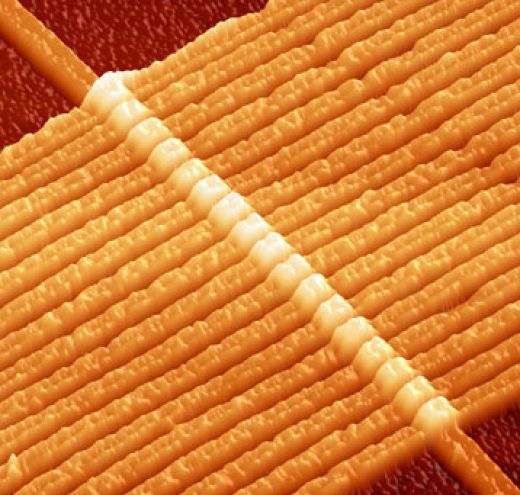 In 1971, electrical engineering professor Leon Chua proposed a theoretical basic electronics component called a memristor. In 2008, Hewlett Packard brought the memristor out of theory and into the real world. And today, HP announced that they have finally proven that they can build devices that use memristors, instead of the transistors that enable all current computer chips. Since memristors can store and process data simultaneously, stack on top of one another in a 3-D fashion, and function at much smaller sizes than a transistor, this advance could increase the power and memory of computers to nearly unimaginable proportions within only a couple of years.

“In theory we can connect thousands of layers in a very straightforward fashion,” Stan Williams, and scientist at HP, told the BBC. “It could provide a way of getting a ridiculous amount of memory on a chip.”

Memristors improve on transistors in three key ways. First off, they allow the same device to serve as the processor and the memory. Right now, computers need separate devices for memory (such as solid state flash memory or regular magnetic hard drives) and processing (the computer chip itself). By eliminating the communication time and energy between those different parts of hardware, a memristor system would work far faster, and with far less energy, than a traditional computer.

Second, memristors can be much smaller than transistors. Quantum mechanics limits how tiny transistors can be, a limit that current technology is rapidly approaching. Memristors would allow computer chips to continue getting smaller past that point, all without resorting to exotic tricks like graphene chips or quantum computing.

Lastly, unlike transistors, which only work linearly, memristors can form three-dimensional networks. This added dimension exponentially expands the number of connections, and thus the power, of a memristor computer. In fact, the 3-D network capability of memristors is so profound that Leon Chua, the man who first theorized the existence of memristors in the 1971, believes that this technology could enable the creation of electronic brains. “We have the right stuff now to build real brains,” he told the Times.

Hewlett Packard has already created a few simple devices that run on memristors as proof of concept, and they think that they can have the first working models capable of replacing some current computer parts within three years. However, with memristors enabling chip development for decades past where transistors would have hit their physical limit, the true value of this advance may not be realized for years to come.