When you think about it, it’s ridiculous to spend the effort lugging around spare batteries, hand-cranked chargers, piezoelectric gadgets, and... 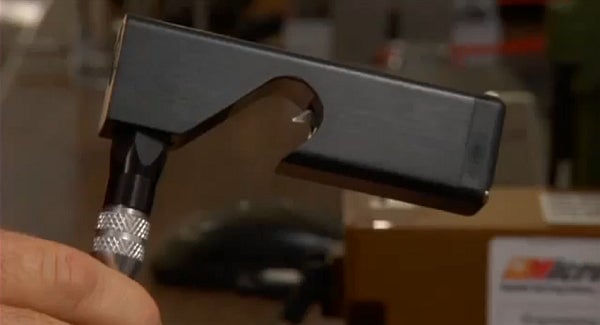 When you think about it, it’s ridiculous to spend the effort lugging around spare batteries, hand-cranked chargers, piezoelectric gadgets, and all the other half-baked solutions we depend on to resuscitate a dead phone. There’s a potent supply of free power just waiting to be tapped, right above our heads. No, not the sun — overhead power lines.

The Bat Hook is as simple as any plug-in charger, but it’s great for on-the-go. It’s just a weighted hook with a razor blade in it, strung on the end of a cord: you toss it over the nearest power line. Its blade pierces the live wire, neatly and safely conducting electric current down to you, for convenient charging of gadgets, jumpstarting cars, or powering your roadside business. It even works in the rain!

The explanatory video from the Department of Defense says something about how it’s only for trained Special Operations soldiers, and “you should never throw something over power lines,” but that is clearly just marketing hype, calculated to give the Bat Hook an air of exclusivity. The video says it’s for use in jungles too, and everyone knows there aren’t power lines overhead in jungles.

[via Armed With Science]

NOTE: Popular Science does not endorse or recommend monkeying with power lines by anyone not explicitly trained and authorized to do so. Electricity is quite deadly if you get in its way.