New Clean-Fuel Rules For Ships Could Actually Hurt the Environment

The International Maritime Organization, which oversees the shipping industry, will begin enforcing rules this July that mandate cleaner fuel to... 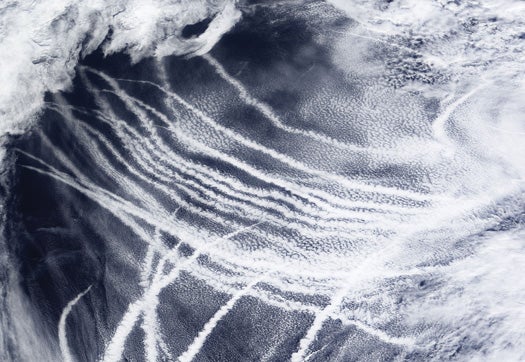 The International Maritime Organization, which oversees the shipping industry, will begin enforcing rules this July that mandate cleaner fuel to cut air pollution and acid rain. Ironically, this eco-motivated change will undo one of our strongest, if accidental, defenses against climate change.

The regulations call for reducing the sulfur in shipping fuel—which is basically unrefined petroleum sludge—from 4.5 to 0.5 percent by 2020. Scientists project that this switch will cut sulfur-pollution-related premature deaths from 87,000 worldwide per year to 46,000. But the sulfate aerosols spewing from supertanker smokestacks also produce planet-cooling clouds called ship tracks, which form when water droplets coalesce around sulfate particles. These clouds, which are big enough to be seen from orbit, reflect sunlight back into space, preventing the equivalent of up to 40 percent of the warming caused by human-produced carbon dioxide. “The IMO has done a good job addressing air-quality issues,” says Daniel Lack, an atmospheric scientist at NOAA. “But there’s a climate impact that wasn’t necessarily considered.”

Worse, the fuel switch won’t improve ships’ carbon emissions—if the industry were a country, it would be the sixth-largest CO2 emitter. The IMO plans to regulate CO2, but until then, it might be best to leave well enough alone.