In a rare success for gene therapy, sight is regained in one eye 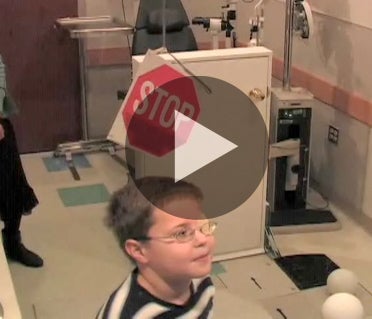 Lab mice, perk up your fuzzy little ears. You are not the only species that struggles through mazes in the name of science. Here, it’s an eight-year-old boy who can’t see too well. But don’t feel bad, in the second video he aces the test when he’s allowed to use his eye that’s been treated with gene therapy. This procedure is one of the few successful applications of gene therapy, a technique that people once thought would cure nearly all ills, but problems getting the genes into the body’s cells has plagued the field every step of the way.

The videos are part of a study published online in The Lancet on Saturday. Six of the twelve patients who received the shot of genes in their eye for their congenital blindness are now now longer considered legally blind. (If this sounds familiar, it’s because a preliminary study last year got three adults to read some letters on an eye chart. That study was the first gene therapy trial for a nonlethal condition.)

Here, the kid struggles (and I mean struggles) to make his way through the maze with his gene-therapy eye behind a patch.

Here, the kid makes it through easily, using his genetically-enhanced eye, with his control eye behind a patch.