Five years after a 1999 car crash left Eric Ramsey a victim of locked-in syndrome–essentially a conscious mind trapped inside... 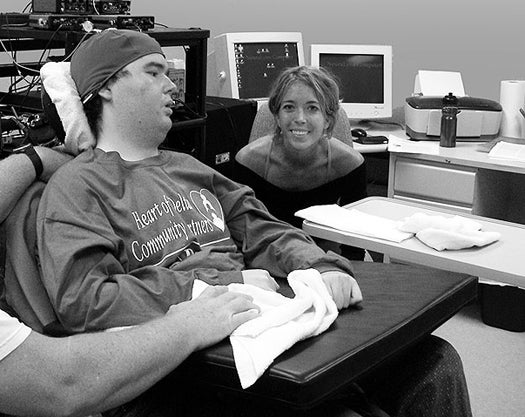 Five years after a 1999 car crash left Eric Ramsey a victim of locked-in syndrome–essentially a conscious mind trapped inside a completely unresponsive body, unable even to blink–he soon found himself on the cutting edge brain research. In an attempt to allow Ramsey to communicate with the outside world, scientists implanted a device in his brain linking it directly to a speech synthesizer. After years of practice, Ramsey could generate vowel sounds just by thinking of them.

Now, 36 months after Ramsey began the trial that partially reconnected his isolated mind to the rest of the world, the researchers who implanted the device in Ramsey’s brain have revealed how they produced this nearly miraculous outcome.

Writing in The Public Library of Science, the researchers detail how their device hones in on areas of the brain related to speech, as opposed to thought or spacial reasoning. While other systems utilized minute movement in paralyzed patients to allow them to type out words, like Jean-Dominique Bauby in The Diving Bell and the Butterfly and physicist Stephen Hawking, Ramsey’s implant works much faster by forming words a syllable at a time.

Over the course of two years, the researchers worked with Ramsey, giving him target vowel sounds to generate, and playing the results back to him so he could gauge his own effectiveness. By the end of the study, Ramsey could accurately reproduce the target vowel sound 70 percent of the time. This is a significantly better success rate than the spelling system, which an Esquire profile from last year revealed Ramsey could no long use.

Clearly though, this system remains experimental at best. Accurately reproducing sounds is a long way from carrying on a conversation, but the scientists in charge of the study thing they will reach that level of sophistication within the next five years. If they do, it will be the first time anyone has conversed with Eric Ramsey since 1999.

Check out New Scientist for more and an audio clip of Ramsey using the software.