The Mono-Mono Twins Are Cute, But Mostly They’re Rare—And Fascinating 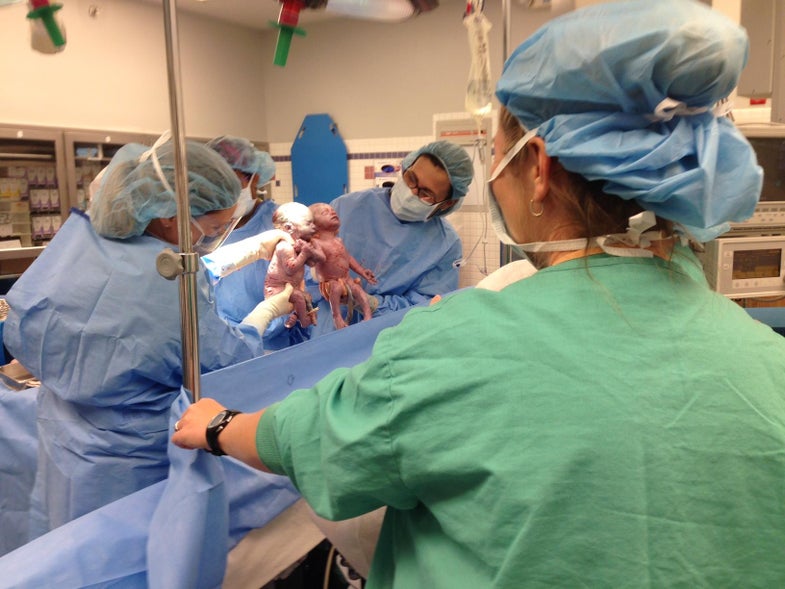 The same internet that brought you “otters holding hands” has delivered new viral gold: newborn twins holding hands. Photos of the infants, born in Ohio last month, and their mother went viral from their sheer adorableness. But the twins’ apparent affection for one another wasn’t the only thing that made them unusual. They are also “mono-mono” twins—a very rare occurrence where they share a placenta and amniotic sac throughout the pregnancy.

I’d never heard of a mono-mono birth until I saw those headlines, which I assumed was a reference to some unique birth position that had something to do with monkeys. (“Mono” is monkey in Spanish.) But the term “mono-mono” actually refers to “monoamniotic-monochorionic.” Before we get to what that means, it’s important to know how twins typically come about to understand what makes mono-mono twins so rare.

Typically we hear about twins that are fraternal and identical. Fraternal twins come from two different eggs that were both fertilized and implanted in the mother’s uterine lining at the same time. They’re as genetically similar as siblings that are born separately, and each is nourished by its own placenta—the organ that connects the growing baby to its mother’s uterine wall and nourishes the fetus—and in its own amniotic sac, where it grows and is contained until its mother’s “water breaks.”

Identical twins come from one egg fertilized by one sperm, forming an embryo that splits into two (or more) embryos as it develops. If the initial embryo splits more than a few days after fertilization, these twins would share a placenta, which means they are monochorionic. If the embryos also share an amniotic sac, which develops in the second week, they are monoamniotic. So mono-mono twins form because the embryo split 8-12 days after fertilization, and the fetuses will be in almost constant contact for their entire development in the womb. If the embryo split any later, the twins would be conjoined.

There are lots of factors that can determine a woman’s likelihood to give birth to twins (such as genetics, age, and fertility treatments), but on average one out of every 30 babies born in the US is a twin. But mono-mono twins are much more rare, reportedly only found in one in every 10,000 pregnancies.

Part of the reason they’re so rare, though, is because there are so many risks and complications that could happen to growing fetuses that are in such close contact. The placenta could be compressed, limiting the nutrients to one or both of the fetuses. They also run the risk of Twin-to-twin Transfusion Syndrome (TTS), where one twin takes up more of the nutrients than the other, sometimes causing the other’s death. Or the fetuses could simply get tangled in the umbilical cord. To avoid some of these issues, most twins are delivered prematurely, often by C-section, which can present other challenges.

Ohio’s mono-mono twins are rare because they so infrequently develop, but exceedingly so because they were delivered without any major complications. Knowing that background makes the twins’ post-birth hand-holding even more touching.