Apple announced the latest iPad today, and while it may not have the ultra-HD screen or SD card slot we’d...

Apple announced the latest iPad today, and while it may not have the ultra-HD screen or SD card slot we’d been hoping for, it’s still an improvement over the first iteration of the tablet, both in hardware and software. Chief among those: the new Apple A5 chip, a dual-core processor like the Motorola Xoom’s and BlackBerry PlayBook’s, and both a front-facing camera for FaceTime chat and a rear-facing camera.

Size: The hardware has been rejiggered in the typical Apple way–ever thinner, in this case whittled down to a mere 8.8mm thick (thinner than the iPhone 4, even) and lighter, down from 1.5 to 1.3 pounds (the Motorola Xoom, in comparison, weighs 1.6 pounds).

Color: White! Everyone likes white things! (As John Mahoney noted, it “totally looks like a picture frame”). The classic black will still be available.

Internals: Apple revealed its latest processor, the update to the single-core A4 chip that is predictably a dual-core chip called the A5. That puts the iPad on relatively equal footing with, well, every other tablet that sprung up in its wake–the Motorola Xoom has a dual-core Tegra 2, and the soon-to-be-released BlackBerry Playbook and HP TouchPad both offer dual-core chips as well (a TI OMAP and a dual-core Snapdragon, respectively). Apple claims the new A5 is nine times faster than the A4, which is kind of a hard number to quantify but at least assures us that the iPad 2 will be noticeably faster than its predecessor. At the same time, Apple says the iPad 2 will retain that legendary 10-hour battery life, despite the new power and new size.

As for other internals, the iPad 2 will come with a gyroscope sensor, just like the iPhone 4–it can be used for better sensing of movement, in concert with the accelerometer. Apple did not mention memory, however, long considered the Achilles’ heel of the iPad 1: That tablet came with a mere 256MB, 25% as much as competing tablets like the Motorola Xoom. That inhibits its ability to run multiple programs at once, so we hope Apple just neglected to mention a bump.

Protection: Weirdly enough, the new Apple-made case is one of the more exciting things on display today. “Case” is really a misnomer–it’s more of a screen cover, a thin sheet that shields the iPad’s screen but not its back. The case, made of either leather or poly cloth, attaches to the iPad with magnets, and can be folded into a stand to hold the iPad 2 either vertically or horizontally. Our favorite part? When the cover is applied, the iPad goes to sleep, and when it’s removed, the iPad wakes–automatically. 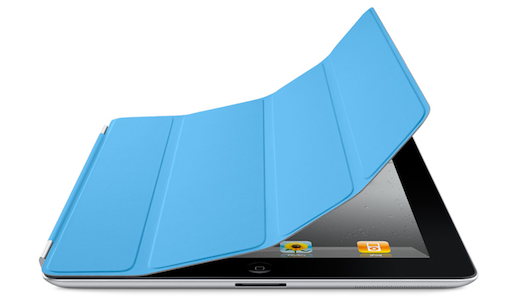 HDMI-Out: There’ll also be an HDMI-out adapter, the first in an iOS device, which mirrors your content on an HDTV. Nice, but pricey at $40, especially when just about every other tablet and phone can do this with a standard miniHDMI port.

Apple is updating their content creation software for the iPad, perhaps to counter the perception that tablets are all about content consumption. That comes in the form of a revamped iMovie and GarageBand, Apple’s two excellent programs for video and music editing. GarageBand features virtual touch instruments, which make me uneasy as a musician, but it seems like it could be a pretty impressive mobile recording studio. Both will be available for $5, which is pretty insane considering the depth of those programs. Loath as I am to give up my decades-old, chipped plastic 4-track cassette recorder, the iPad 2 might actually be a superior option.

Otherwise, iOS 4.3 is largely unchanged–Apple says Safari browsing will be faster, and there are some improved AirPlay functionality, but otherwise it’s pretty much the same. iOS 4.3 will ship for modern iOS devices (less than two years old) on March 11th, though Apple excludes the Verizon iPhone 4 from this announcement–it’s possible that iOS 4.3 will be a little delayed for it, although Verizon iPhone owners are accustomed to waiting.

The iPad 2 will be available in both black and white on both AT&T and Verizon. Both will be 3G–no LTE here yet.

You’ll be able to snag the iPad 2 here in the States on March 11th, otherwise known as next Friday. Internationally, it’ll see release on March 25th.