Apple put its most recent smartphone chip and 5G into a smaller, more affordable device the iPhone SE that should be viable for years. 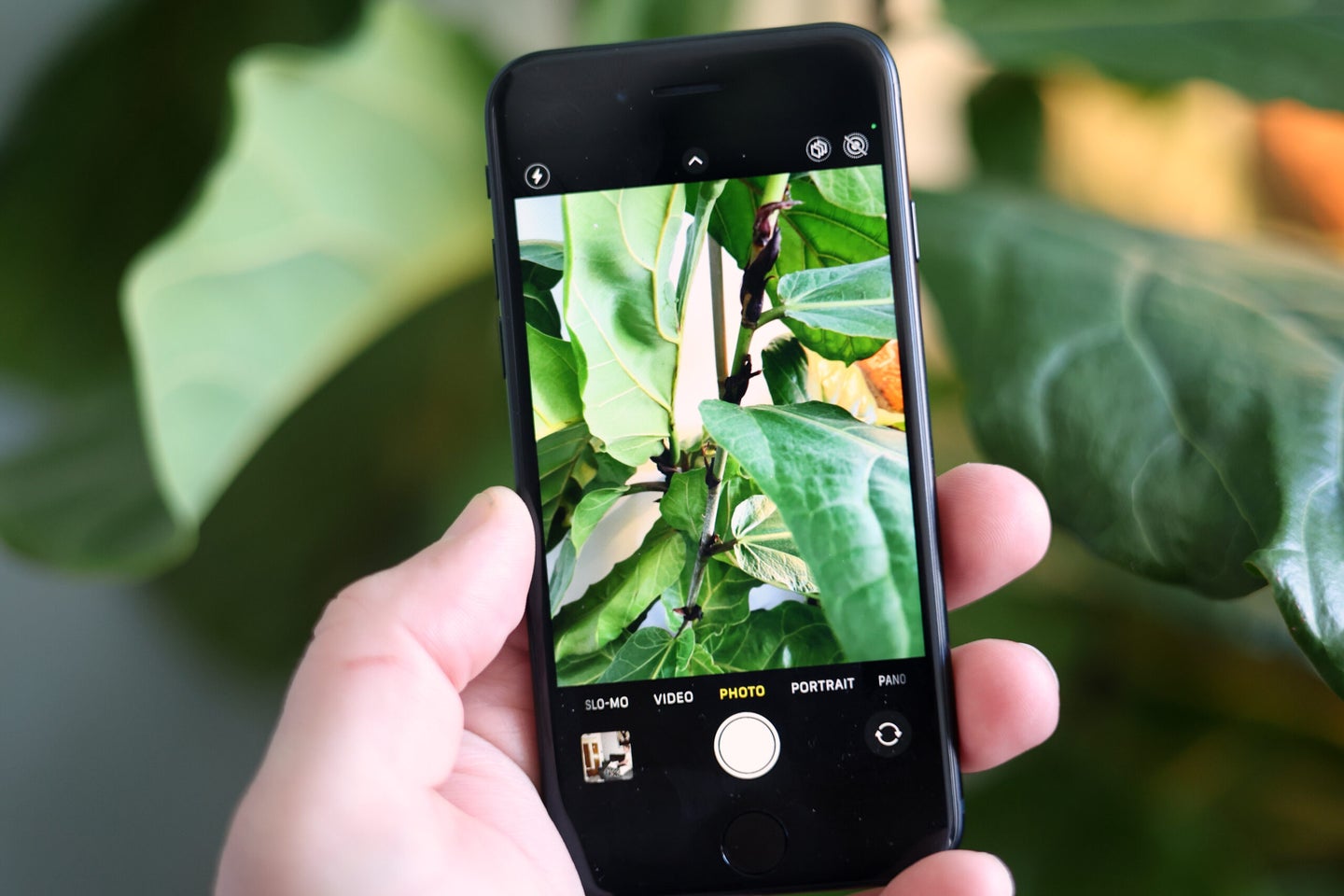 Apple isn't specific about the "all new" camera, but it does seem to improve upon previous versions. Stan Horaczek
SHARE

At a press event held March 8, 2022, Apple announced the next generation of Apple iPhone SE. From a design standpoint, it keeps the same 4.7-inch screen, home button design, and price range as its 2020 predecessor. Now, however, Apple’s entry-level iPhone totes 5G compatibility and the same A15 Bionic chip found in the iPhone 13 lineup. I have spent a few days with the new iPhone SE and had the chance to compare it to Apple’s current flagship, as well as an original iPhone 8. We’ll update this first-look review after spending more time with the new iPhone SE but, as of now, it’s a solid entry point into the iPhone lineup or upgrade for people still clinging to years-old devices. It also may be a viable way to downsize for people looking to declutter their pockets and attention spans.

What is the iPhone SE?

The car world has a practice it calls restomodding. It involves upgrading classic cars with modern engines and electronics while keeping them looking totally stock from the outside. Apple has taken a similar approach with the iPhone SE. Pick up an SE from 2020 or the latest model we’re reviewing here and you’d be totally forgiven for thinking it’s an iPhone 8. The SE has the same rounded edges as the 2017 budget iPhone, the same 4.7-inch screen, and a Touch ID home button.

Inside, however, things are much different. The 2022 SE comes toting Apple’s A15 Bionic chip, which is a huge leap from the chip inside the iPhone 8 and a two-generation jump from the A13 Bionic found in the 2020 iPhone SE. You’ll feel that jump much more from an older chip since the A13 is still very capable.

Unlike the 2020 version, the new iPhone SE supports 5G sub-6GHz, which is the most common flavor of 5G. It lacks mmWave compatibility, however, so if you’re hoping for blazing fast ultra-wideband support, you’re out of luck. That 5G compatibility also tacks on an extra $30 to the price, bringing the 2022 SE price up to $429, up from $399 for the 2020 model.

Who should buy the iPhone SE?

If you’re considering a new iPhone SE, you’re likely either looking to downsize from a massive current-gen device or step up from an iPhone that’s getting old. I spent a few days with the SE as my main device and compared it against some current and older iPhones, including my regular iPhone 13 Pro Max and my son’s aging iPhone 8.

Switching from a bigger iPhone

If you’re used to a screen larger than 6 inches, the SE’s 4.7-inch display will absolutely feel tiny and sometimes cramped—at least while you get used to it. After a few days, though, it became the norm. Scaling down for a little while actually helped me realize how preposterously large the 6.7-inch 13 Pro Max really is.

Switching back to Touch ID for logging in is simple, but breaking the swipe-up habit and going back to the home button for navigation took a little longer to get the muscle memory back.

If you’re used to a higher-end iPhone, you may miss some of the other creature comforts that come with the pricier, more feature-rich models. The SE charges wirelessly but doesn’t have the magnets in the back of the device that would allow it to snap easily onto a MagSafe charger.

While the iPhone SE’s camera has improved over the previous version in terms of the overall image and video quality, the lack of night mode makes a considerable difference when it comes to media shot in very low light. When the lights get really low, the SE feels a little outdated.

When it comes to battery life, the new SE will likely last you all day unless you’re pushing it really hard, but you’ll definitely have to charge it every night. Fall asleep without it on the charger and you’ll wake up to a dead battery where you might not on an iPhone 13 or bigger.

If you can get past differences like that, however, the SE is a very capable device. I edited some raw photos in Lightroom CC, did some Apple Arcade gaming, and scrolled through a bunch of TikToks while waiting for car service and it was all just fine. It wasn’t as luxurious as a big flagship phone, but it also doesn’t feel like the massive downgrade I expected. Plus, it gave my pinky a much-needed rest from holding a giant device.

Upgrading from an older iPhone

There are still plenty of iPhone 7 and iPhone 8 devices out there in the world performing just fine. As the compatibility limit starts creeping up on them, though, people will be looking to upgrade to something with a longer shelf life. Apple currently supports devices back to the iPhone 6S, which goes all the way back to 2015, so the new SE will likely have software support for a long time to come.

From a usability standpoint, the SE really does feel like using an iPhone 8 with a turbo booster on it. You’ll notice a difference more with resource-intensive activities like gaming and media creation, but everything feels snappier in general on the SE. My son’s beat-up iPhone 8 doesn’t come close to lasting him a full day on a single charge anymore, which is likely the case for many older iPhone devices out there, so this more efficient performance will likely be a huge boon in that regard.

The camera is also substantially better than it was on iPhones even just a few generations ago. Apple’s newest flavors of HDR and other computational photography features have made big leaps of late, which means you’ll enjoy drastically better image quality overall, even if that doesn’t apply to situations with extremely low light.

If you’re already used to a phone without a huge screen, Face ID, or MagSafe, you won’t miss them. You will, however, notice the better battery life, faster performance, and hundreds of dollars you save.

Because Apple upgraded the glass on the front and back of the new SE, it should also be more durable, though I haven’t had a chance to test that because I haven’t dropped it—yet.

If you’re in the market for a small phone, then you may be curious how the SE differs from the Mini and I can say that they’re very different devices. The Mini offers all of those extra features like Face ID, MagSafe, Night Mode, and more because it’s a full-fledged iPhone 13. It immediately feels more advanced from a usage standpoint, which helps justify the roughly $300 price difference between the two.

Weirdly, the Mini’s 5.4-inch screen still makes it feel considerably larger than the 4.7-inch SE, so if you’re looking for something truly pocket-friendly, the form factor advantages found in the SE might outweigh those bells and whistles that come with the 13 Mini.

Some final thoughts about the iPhone SE

Some of us are too far gone to forgo the world of gigantic phones and go back to a 4.7-inch screen like the iPhone SE’s. But, at $429 before any discounts apply, the SE represents an important entry point into Apple’s smartphone lineup. Tougher glass and a standard design make it more durable during its lifespan and easier to repair and recycle once it’s damaged. The new processor and continued software updates mean it will likely be a phone that could last five or more years before it needs replacing as long as you can resist the lure of fancy new features.

Personally, I would love to see a bigger, slightly dummer iPhone along the lines of an SE Plus version. I had an iPhone 8 Plus for some time and liked the form factor a lot. A cheaper 5.5-inch phone with guts fast enough to do everyday tasks and some light content creation would make a ton of sense from a consumer standpoint. Maybe we’ll see something like that in the future.

Ultimately, the Apple iPhone SE isn’t flashy, but it will do everything you need an iPhone to do while saving some cash—and maybe your pinky—along the way.