It may require some set-up, but the Fluance RT85 record player offers an experience music lovers will flip for. 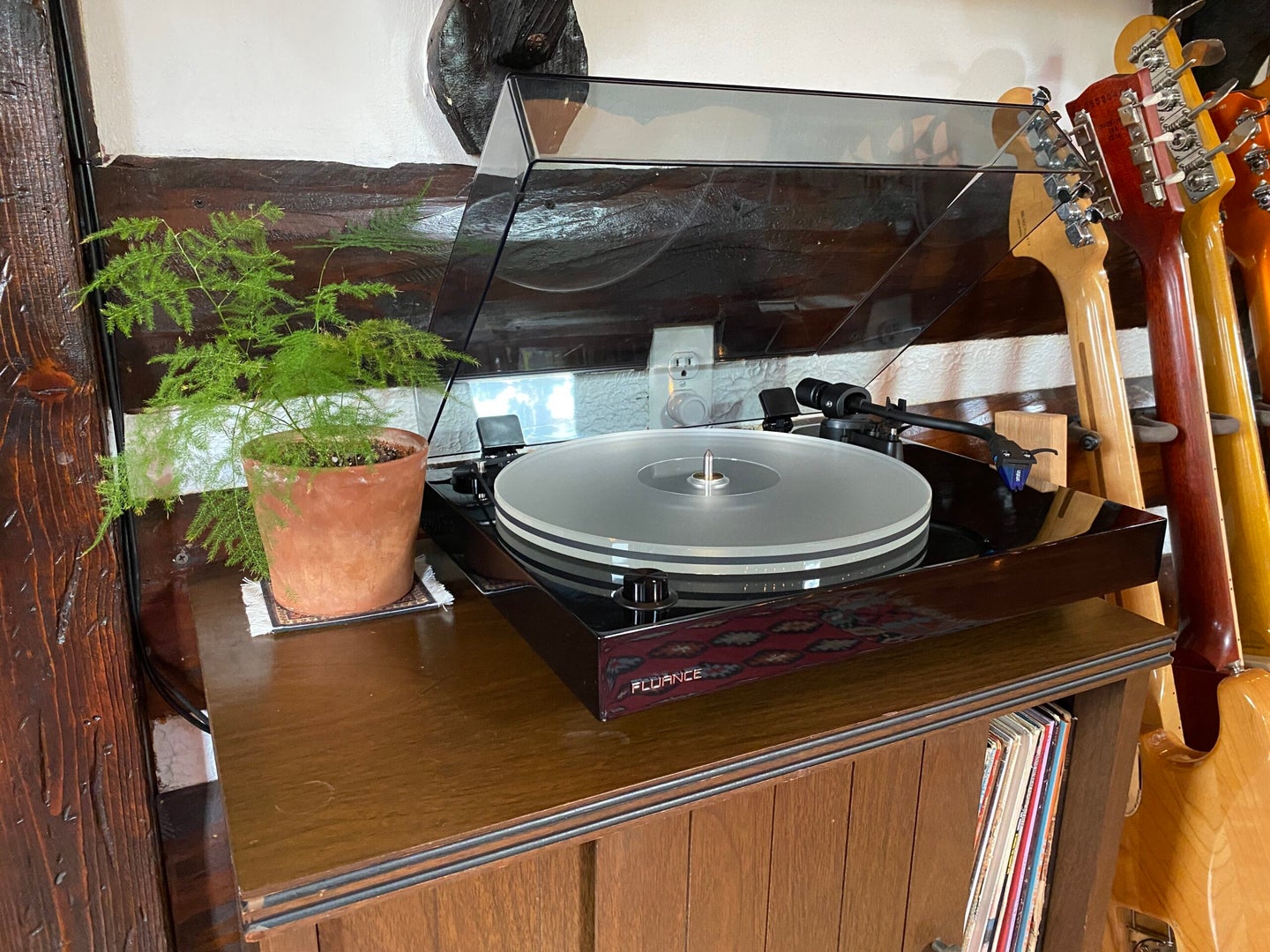 The RT85’s considerable weight and size contribute to reference sound, but you need a sturdy, roomy stand. Jay Cabrera
SHARE

Listening to music on vinyl has made a major comeback after declining in the early digital age. Whether or not you subscribe to the notion that the sonic qualities of long-playing records are superior to streaming, the act of flipping through LPs and admiring the sleeve art is a ritualistic experience that’s back in vogue. But people aren’t collecting just to collect, so many home audio manufacturers have brought premium turntables to market. The Fluance RT85 record player is a belt-driven turntable that delivers stable, accurate, low-noise playback so you can enjoy an album’s analog artistry as much as its visual design.

Fluance, a Niagara Falls-based Canadian speaker company, designed the RT85 to be the flagship of its hi-fi turntable line. While not the most affordable record player, the RT85’s feature set and sonic performance are for audiophiles and music aficionados who want the best listening experience possible. Let’s take a look at this heavy-hitting, high-value option.

Record players have come a long way since the first needle touched wax in 1948. The RT85 offers way more than nostalgic appeal; its design features consistent playback speed with minimal resonance and unwanted transfer of motion. What that means is that once you put a record on the platter the only thing rocking out will be you.

Visually, the Fluance turntable is quite striking. I tested the glossy piano black model, but it’s also available in piano white, walnut, and bamboo finishes (each with a stylish smoke-tinted plastic dust cover). The RT85’s body is a high-gloss multilayered wood plinth with three feet covered in shock-absorbing rubber. The feet are adjustable to keep the turntable level on uneven surfaces. Topping this MDF chassis is a translucent acrylic platter, which comes packed in a separate accessory box. The platter’s high density and mass contribute to a more consistent speed thanks to increased inertia. In total, the RT85 weighs a solid 17 pounds. The RT85’s considerable weight and size of 13.75 inches x 16.5 inches x 5.5 inches make it a challenge to position it in tight spaces, so a sturdy and roomy turntable stand is the best match for this unit.

The RT85 is a two-speed servo-controlled belt-driven design. This means the motor doesn’t rotate the platter directly. Cheaper belt-drive systems have a reputation for inconsistent speeds due to motor and platter separation, but connective belt problems are mitigated with a heavy platter that maintains momentum using its mass. Fortunately, the RT85’s platter is exceptionally heavy. Its motor is also isolated from the plinth—a thoughtful design move that should theoretically reduce the stylus picking up motor noise. A speed control contributes to precise playback (which can accommodate 33 ⅓ RPM and 45 RPM sources, but not 78 RPM).

Importantly, the RT85 does not include its own preamp. Though it has two standard RCA outputs on the rear and comes with gold-plated RCA cables, you’ll need to bring your own stereo receiver with a dedicated phono RCA input in order to pair it with some appropriately expressive speakers (such as the Fluance Ai41s). This detail is easy to overlook, as many cheaper record players include built-in preamps or even USB connectivity. The lack of an integrated phono preamp allows power users to fine-tune their stereo systems, but more casual users might see this as a minus. You’ve been warned.

Getting started with the Fluance RT85

At first glance, the RT85 looks rather daunting in its shipping box, with many separate parts individually wrapped in foam, cardboard, and plastic of varying thicknesses. Quickly scanning the well-written quick-start guide, I concluded assembly wasn’t complicated but handling parts required care to avoid breaking, smudging, and scratching.

After donning a conveniently included pair of white gloves and placing the plinth on a sturdy table, I unpacked the acrylic platter and slid it onto the central spindle. Around the platter was a very thin rubber belt, which stretched easily onto the motor pulley. The motor pulley does have a separate cap piece you’ve got to slide over the top with some precision and I fumbled around with it a bit before it seated properly.

Next, I clicked the counterweight onto the balanced S-shaped tonearm. It was a bit unclear when to stop pushing, as I heard multiple clicks at different intervals. Luckily, nothing broke. The cartridge head went on the opposite end of the tonearm, but this attached easily with a light push and a simple turn of a nut. The quick-start guide recommended installing the dust cover next, and its two separately packed hinges require user installation. This was the only step in the setup process where I was concerned I might crack something; the plastic hinges required decent force and resetting against the dust cover for proper seating.

With all the mechanical assembly out of the way, it was on to calibration, which got slightly more complicated. First, I placed a small circular bubble level on the surface of the RT85’s plinth and watched it as I raised and lowered each of the three rubber feet beneath. Easy enough. Next, I balanced the tonearm by swinging it over the platter in a playing position and turning the counterweight until the tonearm floated perfectly straight over the platter. This step took me quite a bit of time, mostly due to the great care required to keep the stylus from touching the platter.

Finally, I rotated the counterweight until its indicator line matched the prescribed tracking force value of the cartridge—in this case, 1.8 grams. This value determines the amount of weight that the cartridge places on the surface of the record. After this, I made a quick manual-prescribed adjustment of the onboard anti-skating control, which produces some outward force against the tonearm to combat its tendency to push inward due to motion. Finally, I was ready to plug in the Fluance RT85 and see how it sounded.

Amped to meet you

As noted previously, the Fluance RT85 requires an external phono preamp to interface with audio systems. A traditional stereo receiver, like the Sony STRDH190, has this functionality or you can opt for a small standalone preamp like the Rolls VP29 (the route I took). The RT85 connects via RCA to the receiver or preamp, and the included ground cable must be installed between the grounding terminals of the preamp and the record player to ensure buzz-free performance.

The cartridge that comes with the RT85 is a moving magnet Ortofon 2M Blue, which uses an elliptically shaped “nude,” or single piece, of diamond as its stylus. Unlike cheaper designs that use a small piece of diamond glued to a metal mount, nude diamonds have a lower mass that tracks more accurately and have a grain orientation that better matches the record’s surface, resulting in longer stylus life.

“Clarity” is the word that came to mind when I heard the Fluance RT85. I perceived a wide stereo image with good separation and not a trace of mechanical noise, subtle or otherwise. Compared to my everyday record player, the Audio-Technica LP60XUSB, the speed and pitch accuracy of the RT85 are also superior. I made this assessment by playing two records that I’m intimately familiar with: “Venus Figurine” by Dances and “In Flight” by George Benson.

The densely produced post-punk and synth-pop of “Venus Figurine” features heavy guitars, Casio synths, and drums sitting prominently in the mix. I chose it for its relatively compressed modern production, which is a style that often languishes when translated to a low-headroom medium like vinyl. “In Flight” offers a diametrically opposed production style, recorded and mixed in 1977 when the LP was the industry’s prevailing medium. In it, jazz guitar, electric bass, electric and acoustic piano, plus orchestral elements all swirl together at relatively equal volumes, supporting Benson’s vocal at center stage. Despite the differences between these records stylistically, both feature an abundance of layers and micro-details within a larger soundscape; the RT85 reproduced all of this detail intelligibly without a perceptible trace of added muddiness, especially when compared side-by-side with digital versions of these recordings.

The acrylic material used in the RT85’s platter is incredibly similar to the vinyl records themselves, which results in good contact and an acoustic coupling effect between the record and platter. This relationship between the acrylic platter and the record reduces unwanted resonance typically caused by the motion of the stylus and the friction between the record and the platter surface. The end result is better bass definition and an overall more detailed soundstage.

So, who should buy the Fluance RT85?

Make no mistake, the Fluance RT85 record player is for music fans who want the absolute best from their vinyl collection. The extra cost and setup required for reference turntables over cheaper competitors simply come with the territory when you want the most accurate, evocative vinyl listening experience possible. Users who want a simple record player for casual listening might better appreciate the quick setup and built-in preamp of the Fluance RT81, and those in need of USB connectivity might consider the Audio-Technica LP60XUSB. On the other hand, if you’re looking for one of the best turntables that will look great, last a long time, and provide you with some of the clearest and most stable sound possible, the Fluance RT85 is an incredible value for the money.