A record player guide for beginners. 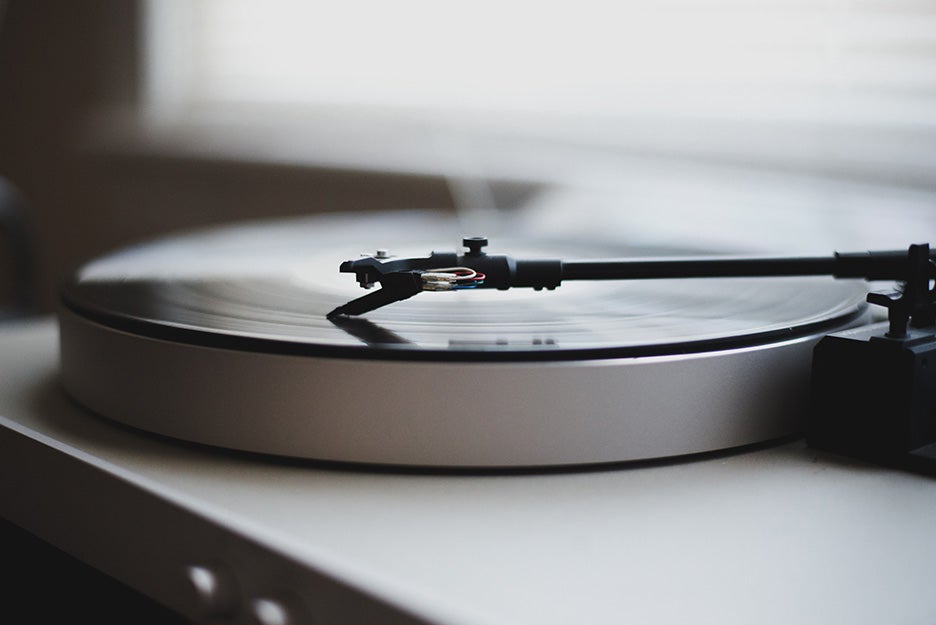 Choosing a turntable can be tricky. There are a ton of companies, each with multiple models on the market. There are also a number of ways to set up a turntable. Knowing this, we’ve set out to simplify that decision-making process for you. If you’ve been thinking about starting a record collection or have a couple of boxes of old vinyl sitting in your attic, the following list of the best turntables will suit most people’s needs without having to become a full-on audio expert. Here’s our beginner’s guide to picking out the right turntable. Some of the following record players let you decide how customizable you want your setup to be, but all are simple to set up and provide quality sound.

Before getting into the list, there is one distinction to make. There are two types of turntables: belt drive and direct drive. Belt drive turntables have a separate motor that spins the platter the record sits on via a belt that is wrapped around the platter. For this article, I tested only belt-drive turntables, since they are purely designed for listening and make the most sense for at-home entertainment. A direct-drive turntable has a platter that is directly spun by a motor. DJs often opt for direct-drive turntables, but they can work at home, too. I’ve got both options in my apartment. My direct drive Stanton turntable is heavier, sturdier, and has more knobs and sliders to affect the pitch and speed of a record.

A second decision to make before purchasing your turntables is whether or not you want your device to have an internal preamp. Turntables create a phono signal that needs amplification in order to play through gear like stereo systems and external speakers. While some turntables have built-in preamps, others might require you to purchase a separate piece of hardware. They can get fairly pricey, but if you don’t want to spend that much, this affordable preamp will do the trick.

I chose to test out U-Turn Audio’s Pluto preamp which features a simple and minimal design, similar to their Orbit turntable I’ll talk about later. The AC-powered phono preamp has a stainless steel enclosure, RCA inputs and outputs on the back, and a subsonic filter that helps to clean up the amplification by removing low-frequency noise. It comes in white and black models.

The U-Turn Audio’s Orbit Basic belt drive turntable is a great option at an affordable price. The minimal design makes the record player seamlessly fit into any room. Beyond the appearance and impressive sound quality, there are options on U-Turn Audio’s website to upgrade components—with the exception of the tonearm—so you can tweak it to fit your preferences. Some upgrades include five choices of cartridges and the choice of either an MDF—medium density fiberboard—or acrylic platter, which can improve speed consistency resulting in cleaner sounds.

The first thing to note about the Orbit Basic is that it doesn’t come with a preamp unless you spring for the optional upgrade. This will make your setup slightly easier since you’ll be able to plug your turntable directly into speakers or an existing stereo system. I asked for U-Turn Audio’s Pluto external preamp—see above—to test the device separately against other preamps and as a way to test other turntables without built-in preamps. The Orbit Basic also comes with a black MDF platter, black felt mat, and a pre-calibrated and pre-installed Audio-Technica cartridge (which holds the needle and produces the sound).

The turntable comes equipped with a pivoting precision gimbal tonearm that helps the record player avoid distortion when it encounters any warps in a record. It uses a built-in, non-adjustable anti-skate feature to prevent the tonearm from moving inward before it’s supposed to by placing an outward force on the tonearm. This keeps the needle in the center of the record’s groove and helps minimize distortion and reduce wear on both the needle and record.

The turntable can switch speeds between 33 to 45 revolutions per minute—or RPM. In order to shift speeds between speeds, you must manually switch the external rubber belt which can take some practice. Most of the time, you’ll probably be leaving it on the setting for a full-length album—the 45.

The 11.5-pound Orbit basic has a motor mounted on the back of the 16.75 x 12.5 x 4.25-inches base—or plinth. The base comes in black, green, blue, red, white, or purple (limited edition). The turntable comes with a detachable, hinged dust cover and has 3 rubber feet that decrease external vibrations and prevent the record from skipping. In the package, you receive RCA cables to connect the turntable to connect to external speakers or a preamp depending on your setup.

Plug in the belt-drive Audio-Technica AT-LP60 turntable, place it on the aluminum platter in the center, and wrap the belt around the motor and platter. That’s all the assembly it requires. You’ll have a hard time finding a turntable that is easier to set up. The AT-LP60 has a built-in preamp so you can plug it into your directly into your speakers. A simple button on the front of the player switches between 33 and 45 RPM playback. Another button on the front automatically raises and lowers the tonearm so you don’t have to worry about doing it yourself. It comes with a felt mat and a removable dust cover.

Crosley’s C6 belt drive turntable comes with a heavy steel platter, built-in preamp, and a super-quiet motor. One particularly nice feature is that you can choose to use their built-in preamp or use an external preamp by toggling a switch in the back. It has a pre-installed Audio Technica turntable with a moving magnet cartridge. Moving magnetic cartridges produce a softer sound (compared to moving coil cartridges), are more affordable, and are easier to replace. This gives you the option to upgrade your C6 turnable’s cartridge.

The turntable can play two speeds of vinyl: 33s and 45s. Unlike the Orbit Basic, in order to switch speeds, you must lift the platter to change the position of the rubber belt. The turntable features a manual return tonearm and has an adjustable counterweight. Basically, once the record is finished, you must return the tonearm to the beginning yourself. An adjustable counterweight is important because too much force will wear out vinyl and too little force makes the sound less full. You connect a receiver or speakers via RCA outputs on the back. The MDF— medium density fiberboard—plinth comes in three colors: walnut, red, or black.

The Denon DP-450USB is a belt-driven turntable that requires a little more setup than some other turntables I’ve been testing, but the step-by-step instructions actually made me feel more comfortable with the machine since they are packed with helpful tips and detailed diagrams, highlighting specific parts. The design is also super modern and sleek.

The Denon has a built-in phono amplifier (you can plug it directly into a stereo system). What makes this machine unique compared to the other three I am testing is its built-in analog-to-digital converter. This feature lets you plug a USB stick into the front and record your vinyl recording to MP3 or WAV recordings. Once recorded, Denon recommends using the PC-specific MusiCut software that is available on the company’s website for free. Apple computers can simply rip the files directly from the USB storage device.

This ripping feature is particularly useful for DJ sets where you have to travel or transfer rare recordings that might not be available on streaming services to a digital space to enjoy from anywhere. Instead of having to lug your vinyl around with you, you can bring your laptop or smartphone. It also features a built-in equalizer to give a little more life to your recording equipment.

It has a detachable dust cover that serves dual purposes. Not only does it protect your setup from dust, but it also allows you to place the album cover you’re listening to on top as a display. Its base and weighted platter are heavier to reduce any vibration from external forces.

To turn on the device, adjust the speed selector to whatever type of vinyl you are playing—it supports 78s, 45s, and 33s. The additional support for 78s makes it a good choice if you have a lot of older records that spun at a faster rate. Place the curved, horizontal tonearm—designed to produce a clear sound by reducing any harmonic distortion—over the record and lower the arm lever. When the record reaches the end of the vinyl, the tonearm automatically lifts itself off the vinyl after ten seconds. This helps preserve the grooves on your vinyl.

Innovative Technology’s turntable plays 33s and 45s, but it can also handle 78s, which comes in handy for playing older records. It’s one of the more affordable and portable options, making it a great choice for a kid’s room or dorm room. It has built-in stereo speakers and allows you to connect devices via Bluetooth, RCA, or aux cord in case you want to add some extra oomph.

The 10.5-pound Crosley Nomad is a belt-driven turntable that is capable of playing all three record speeds—33 1/3, 45, and 78 RPM. The record player can also be connected to a computer to convert vinyl to digital files. It’s got side-mounted built-in speakers, but if you want to use the included RCA connectors, you can also plug them into a stereo receiver. The brown vinyl-wrapped cabinet looks like a suitcase and can be securely closed using chrome snaps. The side handle also makes it easy to carry around with you. The back features an aux input to plug in CD or MP3 players and it comes with a 45 adapter that lets you play 7-inches. It uses an Audio-Technica moving magnetic cartridge with a diamond stylus needle.