A Polaroid-style camera with interchangeable lenses and a hotshoe flash? Yes please.

A new lofi camera for instant photography in a familiar format. 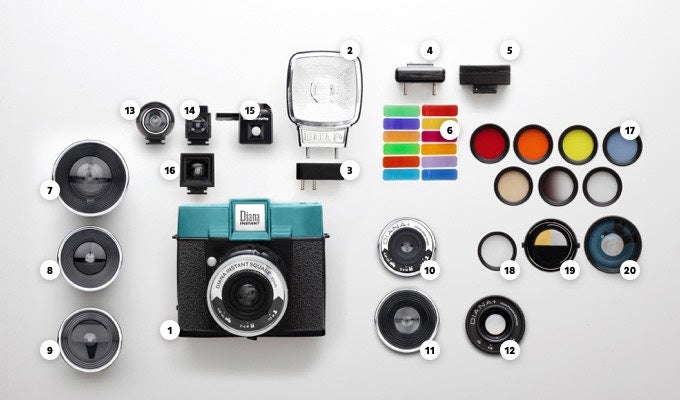 The instax-compatible camera has interchangeable lenses and a hotshoe flash mount. Lomography
SHARE

Lomography, our favorite creator of lofi film cameras, is currently raising funds on Kickstarter for a new Instant Square Camera with an interchangeable lens and a hotshoe flash. It’s called the Diana Instant Square Camera. It’s still in Kickstarting mode, but predictably, it has already surpassed its initial $100,000 fundraising goal and still has 24 days to go. Like the campaigns for the Lomo’Instant and the Petzval Portrait Lens its safe to say that this is a camera that will be coming to the market.

The instax-compatible camera has interchangeable lenses and a hotshoe flash mount, which could make the Diana Instant Square Camera a lot more versatile than other instant cameras that rely solely on built-in flashes. Any of the Diana F+ lenses will work with the Instant Square Camera Diana F+ (110 mm telephoto lens, 75 mm glass lens, 20 mm fisheye lens, 55 mm wide-angle and 38 mm super-wide-angle lens) if those options seem a little funky, keep in mind that because the film that the Instant Square Camera uses is so large it actually makes the lenses appear much wider than they would on a typicaly 35mm camera.

The Diana Instant Square Camera comes in two colors: the classic blue and black ‘60s design and a cream colored version with light blue panels and brown leather accents. Both versions have an adjustable aperture (f/32 for sunny days, f/19 for partly cloudy conditions and f/11 for cloudy days) and a manual zone focusing system.The camera allows for unlimited multiple exposures (taking multiple shots on a single negative), and bulb mode, which leaves the shutter open as long as you hold the button for long exposures. There is a detachable viewfinder and a standard filter thread that makes it easy to use Lomo’Instant accessories with the camera. There is also a selfie mirror on the front of the mirror to make sure your mug gets in the frame.

Interested in other instant cameras that shoot squares? Here are some options:

A pledge of $69 will get you the Classic black and blue camera with a square flash plug and the hotshoe plug. For $89 you will get all of that plus a set of gels and a flash. For $150 you will receive a set of interchangeable lenses for the camera and for $275 you get all of the above, plus a variety of Lomography filters. Lomography says the expect the cameras to begin shipping December 2018.