Researchers Use Modified Rabies Viruses To Map The Brain

Turning a foe into friend 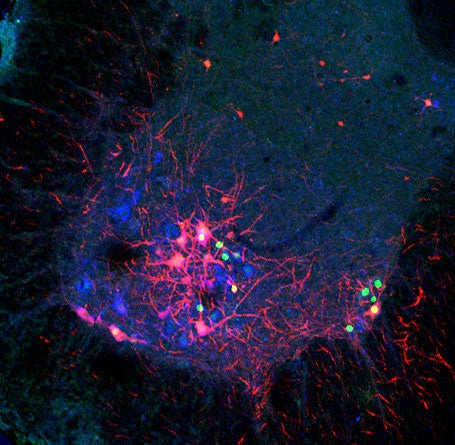 Few diseases match rabies’ rampant method of self-replication and domination of the brain. The virus multiplies, spreading from cell to cell until the brain cannot support normal function and dies.

And that’s exactly why it’s become so useful.

Eight years ago, researchers at the Salk Institute found that by removing a specific gene from the rabies virus used in vaccines, they could limit the virus’s spread. This trapped the virus, making it easy to examine how rabies spread from one neuron to another under a microscope. However, the virus quickly killed its host and destroyed the neurons.

Now, researchers at Columbia University’s Zuckerman Institute have found a better strain of rabies that doesn’t kill the brain, but instead keeps the neuron alive, enabling new research methods that had previously been impossible. This “stealthier” version of the rabies is closer to the rabies found in the wild, which keeps the host alive for much longer, opposed to the vaccine version used at Salk.

The research, published in the journal Neuron, still focuses on only jumping over one synapse at a time, but now the neurons and hosts can live up to a month in the study, more than doubling the time for study in the lab. This means being able to examine live organisms, opposed to dead ones. Instead of tracing infections in dissected samples, researchers can remove a piece of a living host’s skull (right now they’re using mice), and watch neurons with the neutered virus light up. The virus has also been given bioluminescence, so it’s easier to see under the microscope.

If you infect an animal with a wild strain of rabies, you can actually make a crude map back to the source of the infection just by following the brain structures that were infected, according to Thomas Reardon, co-author of the study. But in doing this, the rabies causes such severe degradation of the neurons that it’s impossible to follow the trail for long.

“You can’t really build a wire diagram if you don’t know how things are directly connected,” said Andrew Murray, another co-author. “It provides a much more holistic approach to understanding neural circuits, and even link potentially parts of the brain to behavior.”

He explains that with this tool, we’ll be able to create a much better map of how the brain functions normally, which give great insight into how to combat abnormalities like diseases.

“We’re using this to build much better models of disease,” Reardon added. “But the very work we’re doing to adapt the virus into the tool for experiments is also the work moving us towards using these tools for therapeutics on a very personalized, per person basis.”

That means in the far future, a modified rabies virus might be able to map our brains to help deliver genetically optimized medicine. The researchers liken this finding’s impact on researching the brain to how CRISPR made gene editing easier. But for now, it’s still not totally safe for use in the human brain.

“We’ve kind of brought that functional efficiency explosion into the neurological viruses, the tools that we use in neuroscience to interrogate the nervous system,” Reardon said.