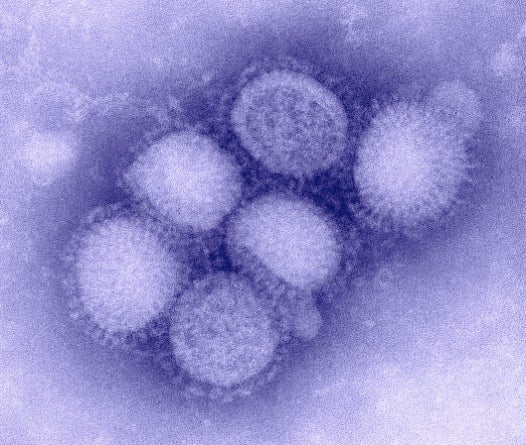 Back in 2009 when the H1N1 pandemic was sweeping the globe–it would leave about 17,000 people dead by the beginning of 2010, with confirmed cases in more than 200 countries–waves of anxiety followed in its wake. For most, it was a fear of an illness that seemed at the time indiscriminate, unstoppable, and incurable. For the virologists and drug developers trying to battle the virus, it stemmed from the fact that H1N1 was so poorly understood. This new strain of influenza A was a hybrid borrowing genetic elements from a handful of flu viruses, and researchers weren’t just without tools–they didn’t even know for sure what tools might be useful.

Fast-forward to late last week when a team of researchers at the Institute of Process Engineering of Chinese Academy of Sciences (CAS-IPE) generated the first computational model of the H1N1 virus at the atomic level. Using molecular-dynamics simulations, CAS-IPE’s Mole-8.5 supercomputer, and 2,200 graphics processors, researchers there built a molecular model of the virus, accounting for every last atom in the H1N1 virion (a virion being a single virus particle).

“We actually created an ‘electronic pet’ in the computer, which we can experiment with under many different environments and conditions with a variety of drugs, and we can know every detail of the change in the virion,” says Dr. Wei Ge, a professor of chemical engineering at CAS-IPE and a principal in the H1N1 modeling effort, told PopSci via email. “Therefore, we believe it could provide a possible way to bridge virology, epidemiology, and drug design on the molecular level.”

The model is the first of its kind for H1N1, and marks a new supercomputer-centric way of dealing with the problems of epidemiology and virology that wasn’t possible just a few years ago. Generally when a particularly troublesome bug breaks out, scientists have turned to the place they’ve always turned: the laboratory. But studying things like viruses and bacteria in the lab is a tricky business. Reactions often take place very quickly–often at the nanosecond scale–and they can be so delicate that to observe them means potentially altering them, which can produce faulty results.

There’s also a disconnect between the way research scientists study viruses and the way pharmaceutical developers perform research and development, Ge says. Research scientists tend to look at a virus’s life cycle–how it grows and spreads–without knowing much about the structural changes taking place at the molecular level. Drug developers, on the other hand, are looking at that molecular structure. They want targets, like proteins that move across membranes (and thus provide a way inside the bug), that they can use to attack the virus.

Neither side necessarily informs the other. But with a computer model like the one developed at CAS-IPE, everything is wrapped up in a neat digital picture of a nasty little bug. Researchers can then simulate what happens when they throw various potential treatments at the virus, testing them for efficacy all without stepping foot in the laboratory.

“An exciting prospect looms when we see these two research aspects integrated,” Ge says. “Potential treatment targets can be identified. Those that play key roles in the life cycle of the virus can be possible targets. Vice versa, effective drugs should bind effectively to the targets and thus result in a different life cycle for the virus.”

That’s exactly what CAS-IPE hopes to show with its H1N1 model. Right now, the simulation runs at a speed of 0.77 nanoseconds per day. That may seem exceptionally slow, but given the ultra high speeds of reactions at the nanoscale it actually provides researchers with an unprecedented high-resolution view of viral processes. If researchers wanted to simulate the virus over hundreds of nanoseconds, for example, it might take a few weeks or months to run the sim at this scale and speed, Ge says. But by optimizing their algorithms they should be able to make their model run faster.

And with more processing power–like that offered by some of the world’s largest supercomputers–simulations could run at even higher speeds. It points toward a day when new virus strains, once discovered, could be rapidly characterized, modeled, and tested for potential treatments at a much faster pace than they ever have been previously. All this could happen without having to grow a potentially deadly bug in the lab and then go through the painstaking, lengthy, and expensive process of testing various potential treatments to see what works. That could substantially trim the timeline between the discovery of a deadly pathogen and finding a treatment or vaccine, which in turn could save countless lives.

“Once the virion is constructed, it can be used under different conditions and be simulated for any length of time,” Ge says. “Such simulations give us a virtual micro-world that can be manipulated and analyzed at will. Such simulations may eventually be a game-changer for the science and technology of epidemiology, virology, and drug discovery.”