This Is Why We Sigh 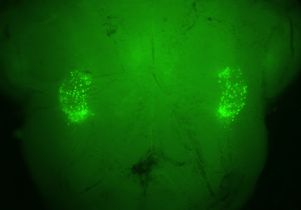 Tiredness, sadness, and relief all feel very different, and yet sighing somehow seems to complement each emotional state. But why do we do it? There have been lots of theories, but no one is quite sure. Now researchers have filled in an important piece of the puzzle: They have discovered the neurological pathways responsible for the frequency of sighing, independent of regular breathing. The study was published today in Nature.

A sigh, defined here as a deep long breath about twice the volume of a typical breath, is of course involved with your emotions. It also serves as a sort of stretch for your lungs—a periodic deep breath inflates the alveoli, tiny sacs in the lungs where oxygen and carbon dioxide pass in and out of the blood.

That stretch is critical to keep lungs working properly. “When alveoli collapse, they compromise the ability of the lung to exchange oxygen and carbon dioxide,” Jack Feldman, a neurobiologist at UCLA and one of the study authors said in a press release. “The only way to pop them open again is to sigh, which brings in twice the volume of a normal breath. If you don’t sigh, your lungs will fail over time.”

That’s likely why the brain triggers a sigh about a dozen times per hour in humans, and more frequently in animals. But scientists had never been able to identify the neurons in the brain that activated this reflex.

The researchers decided to look in the brain’s breathing center in the brainstem. They analyzed the genes in those cells and found that a few hundred of them generate one of two chemicals that allow them to communicate with the “preBötzinger Complex,” a bundle of a few thousand neurons known to control the rate and rhythm of respiration.

When the researchers injected these previously isolated compounds, known as “Nmb” or “Grp”, into the mice’s brains, they found that the mice sighed 10 times more often per hour. When the researchers blocked the Nmb peptide, the mice sighed only half as often as they had originally; inhibiting the pathways made the mice almost stop sighing altogether. None of these changes affected the mice’s normal breathing.

Those same peptides exist in humans, and the researchers believe that they also regulate sighing. If clinicians could the levels of these compounds, they could increase sighing in patients who have trouble breathing on their own, and decrease it in patients with anxiety or other psychological disorders that cause them to sigh too frequently.

The researchers believe they have figured out much of the circuitry behind sighing. But they are still unsure how emotions are involved in the neurological pathways involved in sighing.”It may be that neurons in the brain areas that process emotion are triggering the release of the sigh neuropeptides — but we don’t know that,” Feldman said in the press release.

Other studies that have addressed the psychological side of sighs have concluded that sighs might be used socially to communicate our emotions, or might serve as a “reset button” for the respiratory system. The researchers hope to address this aspect of the complex but necessary circuitry of sighing in future studies.