Attack of the fire balloons 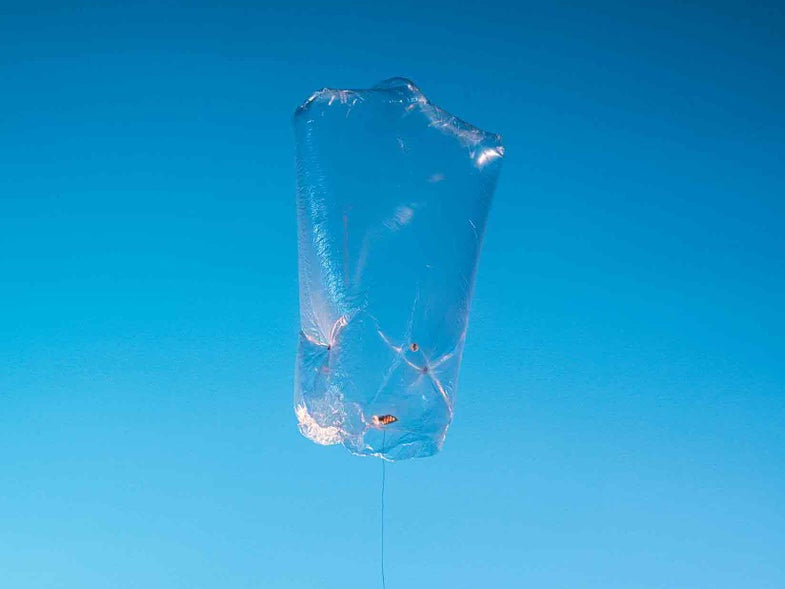 A birds-eye view of the ground lets you size up a situation and attack your enemies effectively. Without a satellite or drone to provide this context, MacGyver rigs up a rudimentary hot-air balloon. First, he uses a wire hanger to suspend an aluminum-foil platform from a dry cleaning bag. Below the platform, he attaches a cell phone that live-streams video of the ground below, and on top, he places a can of Sterno. When he lights the flame, the bag fills with hot air and starts floating, letting the phone serve as an airborne surveillance camera. There’s just one problem. Hot air, while it will indeed rise higher than cold air, cannot carry much weight—a cell phone and a can of fuel would drag it to the ground. “That’s one of those where conceptually it’s a valid idea,” Allain notes, “but in practice it would be stretching it.” Instead of Mac's design, try building the fire balloon created by Popular Science contributor William Gurstelle and pictured in the above photo. It too involves a dry cleaning bag filled with hot air, but heats the air with a light dab of jellied alcohol instead of a can of Sterno. Just remember to follow the safety precautions Gurstelle suggests, and tether your fire-bearing balloon to the ground. Photograph by Ackerman + Gruber
SHARE

In November 1944, Japanese soldiers in a top-secret oceanside location loosed a set of balloons into the westerly winds. These globes, about 33 feet in diameter, contained a crude but ingenious device for releasing ballast that their inventors hoped would stay airborne for three to four days—long enough to reach the United States. There, an onboard timer would activate, causing the balloons to drop their payload: incendiary bombs.

Of the roughly 10,000 balloons—or “Fu-go”—launched, about 10 percent made it across the ocean. But the timer couldn’t control where the bombs dropped, so most fell in unpopulated areas. The strategy never amounted to much. Still, these balloons were the first successful intercontinental weapons.

Last year, a pair of foresters found a 70-year-old Fu-go, half-buried but intact, in the mountains of eastern British Columbia. That amazing discovery inspired me to build my own fire balloon—without the dangerous payload.

My design is much simpler than the historical one. Because my fire balloons lift off with hot air rather than helium, I need to use only lightweight materials. First I smear a dab of Sterno inside a small aluminum pie tin. Once lit, the fuel heats the air in a flimsy, plastic dry-cleaner bag, attached to the pie tin with thin wire. The volume of heated air gives the device enough buoyancy to rise hundreds of feet.

To prevent my DIY Fu-go from setting fires, I tether it with a spool of fine wire. On a cool, still night, it looks like a jellyfish floating toward the clouds.

WARNING: Play with fire, and you could get burned. So be careful, and keep your balloon under control! 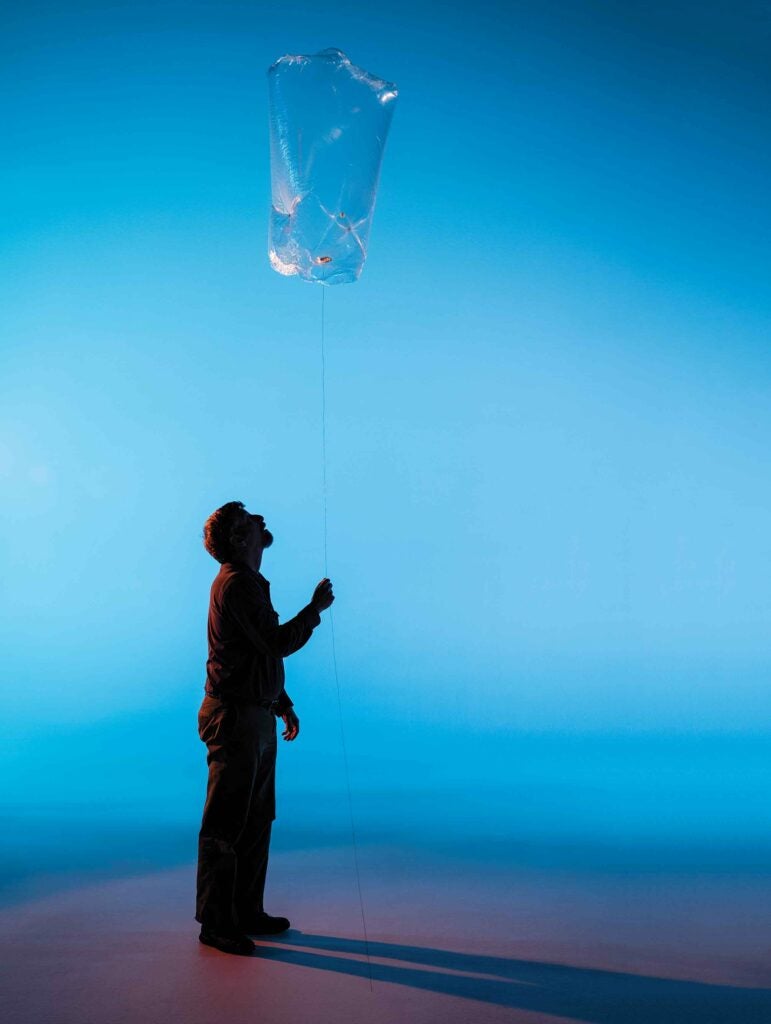 Use a wire tether to keep your own fire balloon under control.

Build Your Own Fire Balloon

You can make a model Fu-go fire balloon from a dry-cleaner bag and an aluminum pie tin. Dry-cleaner bags work well because they are extremely light and the volume of heated air inside them provides enough buoyancy to make them rise to astounding heights. I chose magnet wire to hold the bag to the pie tin because it is light and won’t burn if exposed to flame. The final piece, jellied alcohol, burns hot and provides a sustained source of heat for the duration of the flight.

WARNING: This project literally puts fire in the air—so be careful near the flame and build at your own risk. Keep the balloon under control at all times: attempt only on still days or nights and fly only in areas free of flammable items and materials. 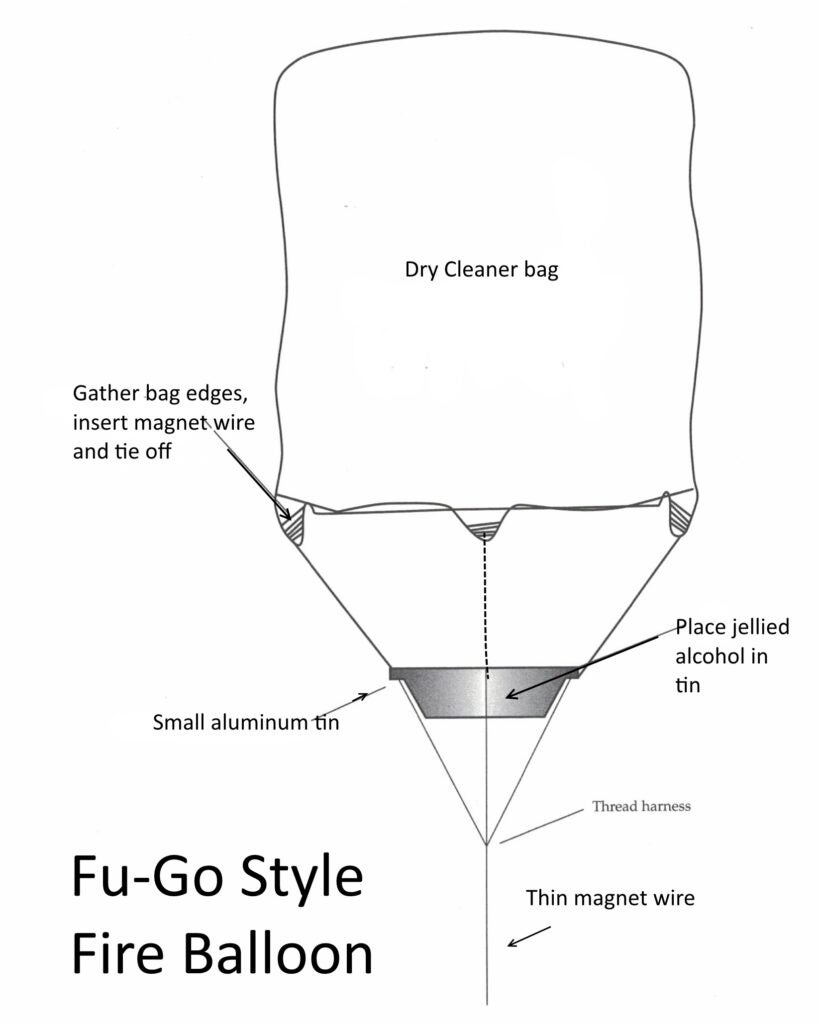 Use this diagram to help build your DIY fire balloon.

This article was originally published in the May/June 2016 issue of Popular Science, under the title “Attack of the Fire Balloons.”