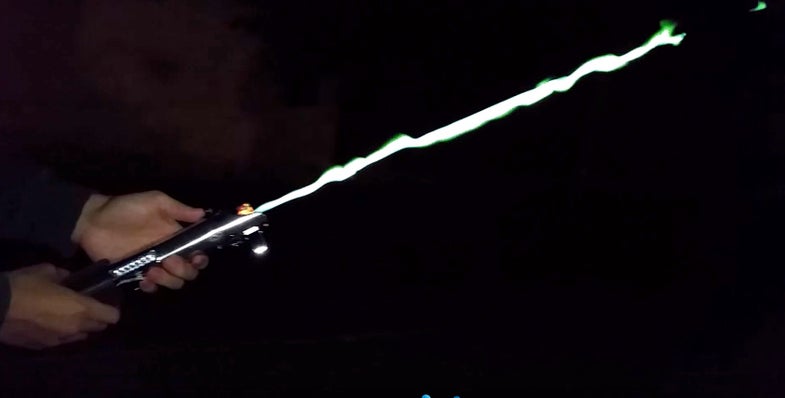 We’d like to share our condolences with all of the university laser research departments around the world who might have been trying to build a self-contained lightsaber for the first time — you’re already too late.

On the eve of the release of Star Wars Episode VII Youtube user and perennial prop recreator “Sufficiently Advanced,” a.k.a. Allen Pan posted a video of his homemade saber lighting a cigarette and burning through balloons and paper with its fiery, sputtering, Kylo-Ren-like blade.

The entire thing was built and modified from existing components, using a replica Skywalker lightsaber shell, a section from a turkey marinade injector, and several 3D printed parts to make it all work together. The result is a finished product by a Youtube craftsman that is neither as clumsy or random as a blaster.

To be fair to the PhDs out there, this isn’t officially a laser sword. The extremely dangerous-looking creation runs on gas, and doesn’t seem to have any crystals or lenses to speak of.

It uses a concoction of methanol and acetone injected into the canister via syringe. Afterwards, butane is added as the “propellant.” As a result, we suspect that, when burning, this mixture has a much more pungent odor than the “scent of ozone” often described in association with the fictional weapon of true Jedi.

We suspect that, as with those fictional weapons, there’s a lot that can go terribly wrong here, and encourage you to enjoy the video without trying it at home.

After all, this blade needs careful handling, and is both susceptible to wind and, sadly, not going to be cutting through steel anytime soon. Think about one of those torch lighters turned to the absolute maximum length setting; it’s more flamethrower than sword. An elegant lighter, for a more civilized blaze.

Still, when holding it steady our Jedi master gets a solid blue “blade” several feet long–enough to snap himself what might be the most badass profile photo of all time.

Correction: this article originally stated that the lightsaber used a butane lighter tank in place of the turkey marinade injector. The inventor contacted us to correct the record, which we have done after publication. We regret the error!