This Mask Lets You Smell The Rainbow

A DIY project that simulates synesthesia 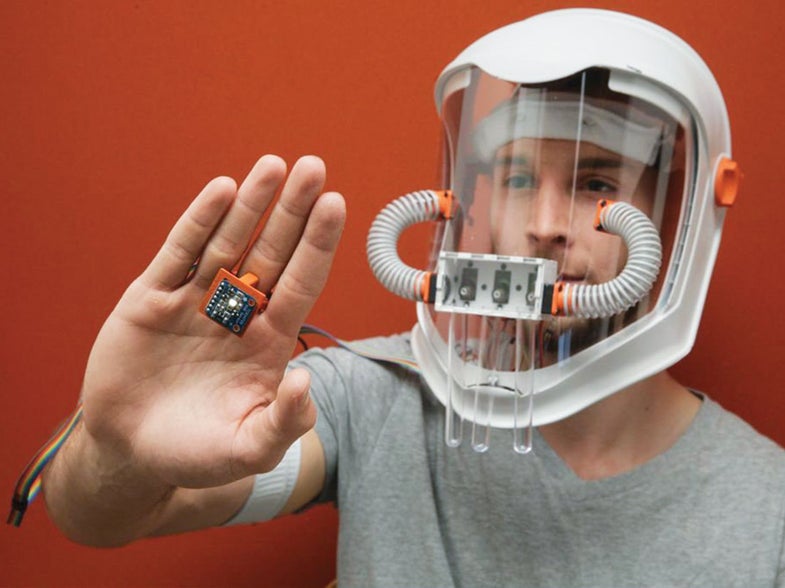 What if you could smell fuchsia or taste the sound of a flute? For people who have synesthesia, these types of sensory associations happen every day. Zachary Howard, an aerospace engineer and an artist-in-residence at Autodesk, wanted to experience synesthesia himself. So he created a device that would turn colors into smells.

First, a sensor on Howard’s finger detects the color of an object and sends it to a processor in the armband. The armband holds an Intel Edison chip, which analyzes the color and breaks it down into its red, green, and blue components, creating an RGB signal. Then the chip coordinates the scent release: Based on the combination of red, green, and blue, three tubes of scented essential oil—one for each color—open into a mask to create a blended smell. Howard used grapefruit for red, tea tree for green, and lavender for blue. Finally, two small fans blow over the mouths of the test tubes, picking up the scent and carrying it to the wearer’s nose.

The first thing Howard touched, a gray wall, yielded a nasty mix of all the smells. But he soon discovered he loved touching anything blue. “I’d get this amazing blast of lavender,” he says.

Watch Howard’s synesthesia mask in use:

This article was originally published in the March/April 2016 issue of Popular Science, under the title “This Mask Lets You Smell The Rainbow.”