The Legacy Of ‘Mythbusters’: A Q&A With Adam Savage 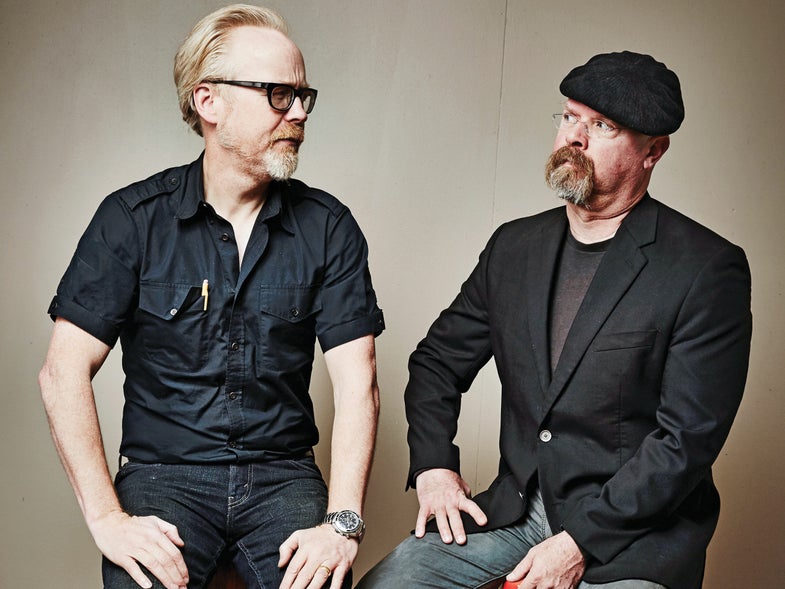 If science and technology are best left to professionals, nobody told Adam Savage and Jamie Hyneman. For 14 seasons, they have provided scientific reality checks to more than 1,000 common myths on their hit TV series, MythBusters. This March, it came to a close.

During their run, the dynamic duo and their co-hosts determined the truth not by quoting expert opinions, but by conducting their own rough-and-ready experiments. Although they did consult experts, “We always based our conclusions on something we saw happen,” Savage says.

Before MythBusters, “DIY” usually referred to building a bookcase or insulating an attic. But the series showed us a quirkier, more creative application for hands-on skills. Nearly every myth called for a testing contraption, often involving explosives or firearms, operated by hosts who clearly loved creating gonzo rigs.

You couldn’t watch without getting the itch to break out a power tool. It’s no coincidence, then, that Savage and Hyneman’s popularity coincided with the rise of the maker movement, which celebrates fun and often wildly impractical creations. “They were an enormous inspiration to the movement,” says Mark Hatch, CEO of the maker mecca TechShop.

Savage and Hyneman would call that myth busted. “We stumbled on a way of doing the show that surfed the wave,” Hyneman says.

Still, they taught us all that technology exists to be used, abused, hacked, and modified—which is why they’re taking home a Lifetime Achievement prize in Popular Science‘s 2016 Invention Awards.

As told to Matt Giles

How do you get started on a project?

When I build stuff, I like to have the materials I will work with in front of me so I can understand them. But before getting to them, I do construction and problem solving in my head. The process of building in my head is one of my favorite feelings—I get an endorphin rush.

Drawing helps me remember the ideas I am having. I certainly think the pencil is one of the most powerful tools for invention ever. I use this really wonderfully crappy Paper Mate Sharpwriter No. 2 mechanical pencil. I pick one up and I feel like inventing.

Any tips for DIYers?

Be ready to build everything three to four times. It is a developmental process, and I never get it right the first time. Being open to that fact helps free me up. For some reason, it took me a while to understand that starting from scratch is the most powerful thing I can do. As tedious as it might seem, the result is better—the second try is almost always better than the first.

At a certain point in every build, I have felt like it would be a total failure. I’d get 70 percent into it, and I would think that this is a piece of crap; why waste so much time on it? Then I would realize I have to push through. But it still happens. I feel that way on almost everything I do.

Do you ever take a day off?

No, I am so addicted to making things. There are days I don’t build anything, but I am always thinking. That’s how I function best.