Even when developing countries receive global aid, teens miss out

Nobody is making sure the kids are alright. 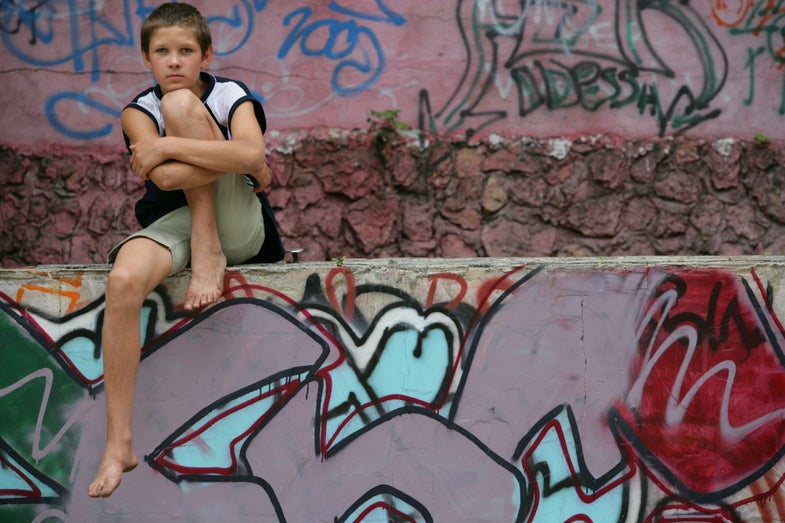 Thinking back, most of us can confirm that adolescence is a rough time. What with stewing hormones, social pressures, changing bodies and the demands of growing up, adolescents face a heavy burden. That burden is correlated with certain health issues—injury, mental health disorders, and nutrition-related illness, for instance. For adolescents in the developing world, the burden may be made even heavier by poverty, diseases like tuberculosis, and cultural expectations like early marriage. Yet a new study from Harvard Medical School and University of Melbourne researchers shows that adolescent health programs in low-income countries receive just 1.6 percent of the funding that comes from the international community for health development purposes.

“Leading causes for burden of disease among adolescents in developing countries are similar to that in developed countries, such as self-harm, depressive disorders, interpersonal violence,” study author Chunling Lu of Harvard Medical School told Popular Science in an email interview. Though around 90 percent of the world’s adolescents live in low- and middle-income countries, the study found that “adolescent health in developing countries received little attention from international donors.”

The study looked at the developmental assistance for adolescent health funding allocated to 132 countries between the beginning of 2003 and the end of 2015. Like other studies into adolescent health, it defined “adolescent” as aged 10 to 24 years. The funding came from organizations like the World Bank, the Bill & Melinda Gates Foundation, and individual countries. Using statistical analysis, they looked at how much funding programs for adolescents received, finding that the number was incredibly low—just 1.6 percent of the total funding, or $3.6 billion. Total developmental assistance for health funding for the years and countries counted was a little less that $300 billion.

The study found that though adolescent health funding increased by five hundred percent during the years referenced, it was still just 2.2 percent of total developmental assistance for health funding. “Considering that one-fourth of the world’s population are adolescents (10-24 years of age), it is clear that adolescent health has not been a priority of donors,” the study reads.

The Harvard and University of Melbourne researchers aren’t the first to point out that adolescent health isn’t receiving the attention it merits. Just last year, the World Bank hosted a conference in Washington, D.C. focused on investing in adolescent health. “Small investments in empowering and protecting the world’s over a billion adolescents can bring a tenfold return, or sometimes even more,” a United Nations spokesperson said in a press release at the time.

A particular area that research has focused on is mental health. For instance, a 2017 study from a multinational teach of researchers found that adolescent mental health initiatives are severely underfunded. “Given that an estimated 50 percent of adult mental disorders have their onset during adolescence, the lack of care and early intervention during this period results in lost economic productivity by both the individual and their carers,” the researchers wrote.

From a public health perspective, interventions in adolescent health can have far-reaching effects and be a quick way to help change health attitudes in a country. And Lu says that some of the interventions that aren’t currently receiving much funding are the very ones that could have the biggest effects. Almost 70 percent of the funding for adolescent-targeted health initiatives in the years the study covered went to sexual and reproductive health or HIV/AIDS. But programs targeting mental health, other sexual health initiatives such as HPV prevention, and injury prevention all have high benefit to cost ratios, Lu says. And some of those benefits can be passed on to the next generation.

Adolescents in the developed world have many of the same needs as their peers elsewhere. There, too, research indicates that many countries are not giving adolescent health care needs the appropriate funding and attention. More funding anywhere in the world is helpful everywhere, writes Lu. “Information about cost-effective interventions for these health risks or diseases in developed countries helps researchers in developing in designing and implementation the related programs, and vice versa,” she writes, “Same as the information about how adolescent health programs are funded and sustained.”

In some ways, it’s not surprising that adolescent health has not received the attention many say it merits. As Popular Science has covered before, the idea that adolescents have specific healthcare needs—separate from both the health concerns of childhood and those of adulthood—and that those needs have far-reaching effects, is still relatively new. Healthcare is designed “by adults, for adults,” as one expert told reporter Eleanor Cummins earlier this year.

But given the historically large size of our current adolescent population, the idea of designing healthcare around their needs merits attention. “It is not an option for the largest cohort of adolescents in history to be the largest underserved population in history,” researchers at Canada’s International Development Research Centre wrote in a 2016 opinion piece. Until funding change happens, however, that is the state of things.