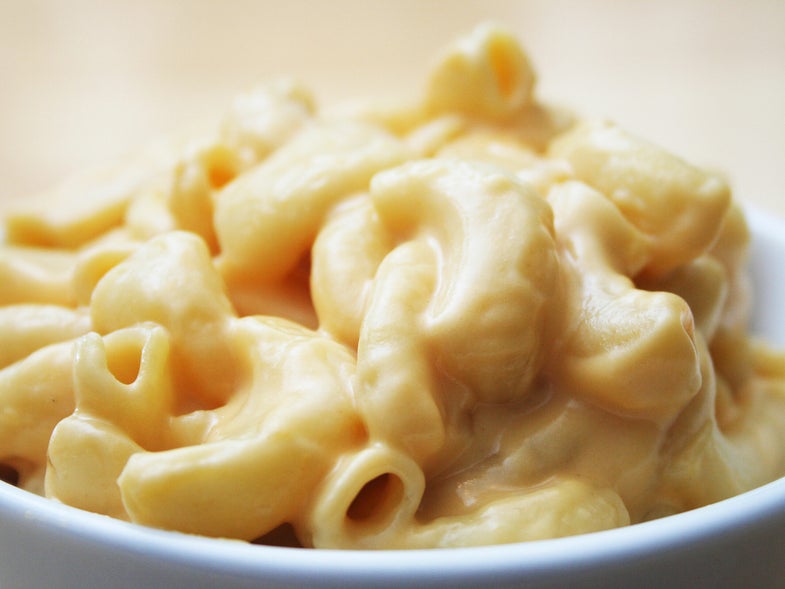 Who doesn’t love macaroni and cheese? Or ice cream, or french fries for that matter. A big reason for that? All of them have one important thing in common: They contain a mixture of carbohydrates and fats. Food and brain scientists have known for a while, that this culinary combo is particularly rewarding to the brain. But it might be even more powerful than we thought: Researchers found that our brain’s reward pathways value this food blend so much that we perceive the hybrid mix as having more calories than a fat or carb alone with the same caloric content. We’re also willing to pay more for it, too.

In a recent study, out in the journal Cell Metabolism, researchers had participants view photographs of various food items and place a price for how much they’d pay for those snacks, some of which contained mostly fats, some mostly carbs, and others a combination of the two. All of them had the same number of calories. As they were bidding on their treats, researchers hooked them up to an fMRI scanner (which shows what part of the brain is active at any given time) to see what was going on in their brains.

With only a limited supply of money, participants were willing to pay more for snacks that had that macro combination than the other two choices. As they were choosing, the neural networks in the brain that control our reward center lit up more for the fat-carb combo than for the participants favorite foods, a sweeter choice, as well as one that was more calorie dense, and one with a larger portion size.

As the researchers note, “These results are the first to demonstrate that foods high in fat and carbohydrates are more rewarding, calorie for calorie, than foods high only in fat or carbohydrate.”

This idea, that we value a fat/carb combo food even more than one that provides more calories, the researchers note, was surprising. If the ultimate is to ingest enough calories, why put so much value on that combination? Understanding that, and more precisely what’s going on in the brain that leads us to that choice, could help us better understand what drives us to eat, and how we might manipulate that system for our health.

The reasons we like certain foods and dislike others stems back to our time as hunter gatherers. Way way back in the day, we used to consume whatever food was readily available. So sometimes lunch would be meat, other times it would be fruit or berries. Rarely was it meat and berries. So, the researchers surmise we might have developed mechanisms for the satiety of fats and carbohydrates separately. Some people have genetic variants that give them an increased preference for sweet over fat foods; for others, DNA quirks makes it so the opposite is true. This is seen in both rodents and humans.

We didn’t start consuming carbohydrates and fat together until we domesticated plants and animals and started consuming grains and dairy. But before our bodies really had time to adapt to that, we developed processed food, which combined fat and carbs in ways that were significantly different even from our domestication days. For example, the researchers note that a food like a donut has far more fat and carbs per weight than things like milk, cheese, or grainy bread.

The several thousand years that have passed between early humans experimenting with agriculture and today may not have been enough time for our brains to evolve different mechanisms to adapt to the changes in our diets. The researchers speculate that we may have evolved different processes to crave both carbohydrates and fats, such that when the two are combined together, they might be forming a type of synergy in the brain. Being able to further identify how these pathways work will help us to better understand how our brains are influencing how—and what—we eat. “These results imply that a potentiated reward signal generated by foods high in both fat and carbohydrate may be one mechanism by which a food rife with processed foods high in fat and carbohydrates leads to overeating,” the researchers conclude.

This echoes what researchers studying obesity have also found about the combination of fats and carbohydrates. “If you are trying to control your weight, studies have shown that eating protein and vegetables and fats as well as protein and carbs and very little fat are all okay. The problem comes when you mix carbs and fat,” says Louis Aronne, director of the Comprehensive Weight Control Center at Weill Cornell Medicine and NewYork-Presbyterian. Aronne was not involved in this research.

The process of weight gain is a reflection of hormonal signals not getting through a part of your brain. Fattening food changes the signaling pathways in the brain in a way that shifts your set point higher, Aronne says. On the other hand, carbs promote the storage of fat calories. “So the two things together creates a problem and many diets now that are successful, go one way or the other.”

As a society, we will never go back to those hunter gatherer times when eating was simple: We ate what was available. Reducing the amount of processed food from our diets could help lower the rates of various chronic diseases, like heart disease, diabetes, and obesity, as would replacing them with whole foods rich in nutrients and fiber. But understanding how our brains make food choices to begin with could help us figure out how to control our brain mechanisms themselves, allowing individuals to be far more in charge of our health.