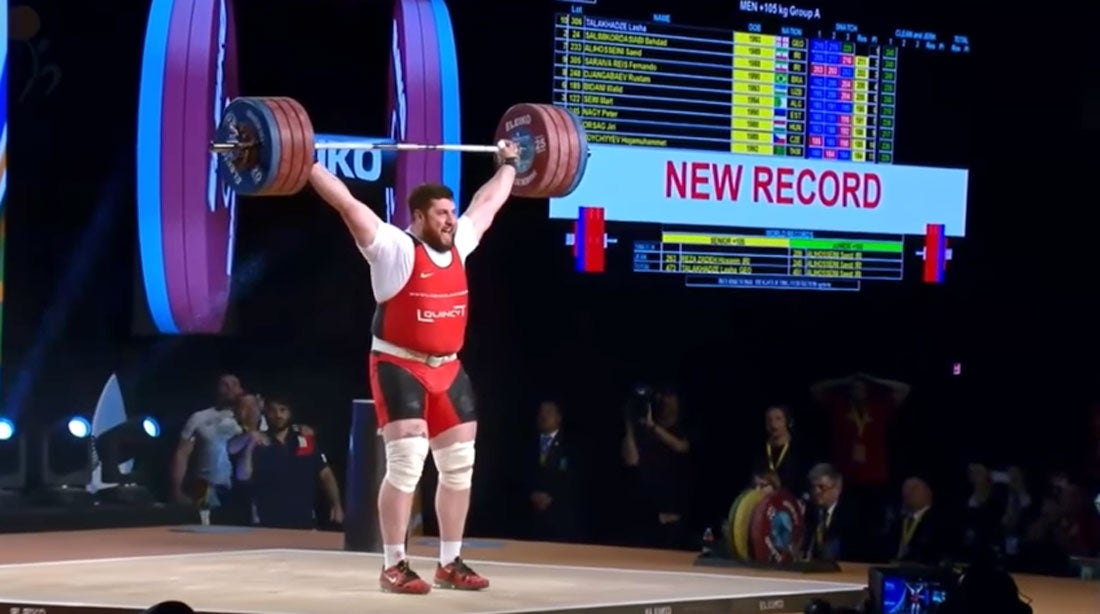 Look around a high-level strength competition like the World’s Strongest Man or the annual Arnold Classic and you’ll see some abs, but you’ll also definitely see some bellies. The same goes for the super heavyweight divisions of powerlifting and Olympic weightlifting competitions. When it comes to pure strength, people with lots of mass typically win out over super-cut bodybuilder types— and the reasons get a bit complicated.

“Strongman training sessions are typically three to four hours long,” says Rick Howard, the northeast regional coordinator for the National Strength and Conditioning Association and strongman competitor. “Strength athletes eat while they train because they learn their bodies. They can feel when they’re running out of energy.”

Even though the workouts typically don’t involve much—if any—dedicated cardio time, lifting weights can burn hundreds or even thousands of calories. The body needs a surplus of calories to build muscle, so eating is part of the routine. High-level competitors like World’s Strongest Man champions Brian Shaw or Eddie Hall typically refer to their eating as “force feedings.”

The result of heavy training and heavier eating is more muscle mass, which competitors use to create more leverage against the bar or whatever other apparatus they may be trying to manipulate.

Weight lifting competitions are often broken up into weight classes. The exact ranges vary depending on the organization in charge of the meet, but it’s typically a competitor’s best bet to weigh in as close to the top of their category as possible. “If you’re in the under 231-pound category for a contest,” says Howard, “you want to weigh as close to 231 as you can.”

For some athletes, that means cutting weight before the competition, but cutting too much weight can be seriously detrimental to pure strength. “Competitive weightlifters have a weight at which they feel the strongest,” says Howard. “Bodybuilders can dehydrate themselves to lose all the body fat because it’s an aesthetic sport. There’s no reason for strength athletes to cut that body fat if they can put it to good use pushing and pulling.”

Bring on the super heavyweights

The most popular weight class—at least from the perspective of a spectator—is the super heavyweight class, which typically doesn’t have a cap on how much you can weigh.

U.S. athlete Brian Shaw won last year’s Arnold Classic Strongman contest, checking in at 6’ 8” and a bodyweight over 400 pounds. And British athlete Eddie Hall won World’s Strongest Man in 2017 at 6’ 3” and roughly 400 pounds. The weights they move are equally massive. One event in the Arnold requires athletes to hoist a 300-pound dumbbell over their head with just one hand.

It’s situations like those in which all that mass comes into play. Physically big competitors have given their bodies more time to adapt to the stresses of heavyweight. During heavy lifts, athletes often wear tight lifting belts around their abdomen to reinforce their bodies’ midline, which includes the abs and lower back. The extra mass packed into a tight belt helps build a sturdy column for holding up seemingly absurd weights.

Building that kind of mass requires lots and lots of food, and not all of it can be “clean,” if you’re going for pure volume and caloric intake. Cutting the excess fat from the bulking process would take precious muscle with it, which is a cost most competitors aren’t willing to pay for looks, or even their own long-term health.

Watch an Olympic-level weightlifter in slow motion, and it’s amazing how quickly the whole thing goes by. The snatch, for example, involves pulling the bar up around the athlete’s waist, then exploding upward and then dropping down under the bar, landing with the weight held overhead.

In December of 2017, Georgian lifter Lasha Talakhadze snatched a record 485 pounds (though, most weightlifters measure their accomplishments in kilograms). The speed with which he moves is impressive. It’s a short, but incredible effort. “You need to expend a tremendous amount of energy over a very short time,” says Howard. “When I’m training strongman, I can lift heavy, but I might huff and puff going to get the mail.”

Speed also comes into play at the lower weight classes, which is why you won’t see as much body fat in smaller athletes. If an athlete can move quicker and drop under the bar faster, that technique can make up for less pure strength.

While the athletes lifting the biggest weights are still typically enormous, there is a slightly new breed of lifter emerging.