Is there a single food that you can survive on forever?

Potatoes are awesome, but not enough to live off of them forever. 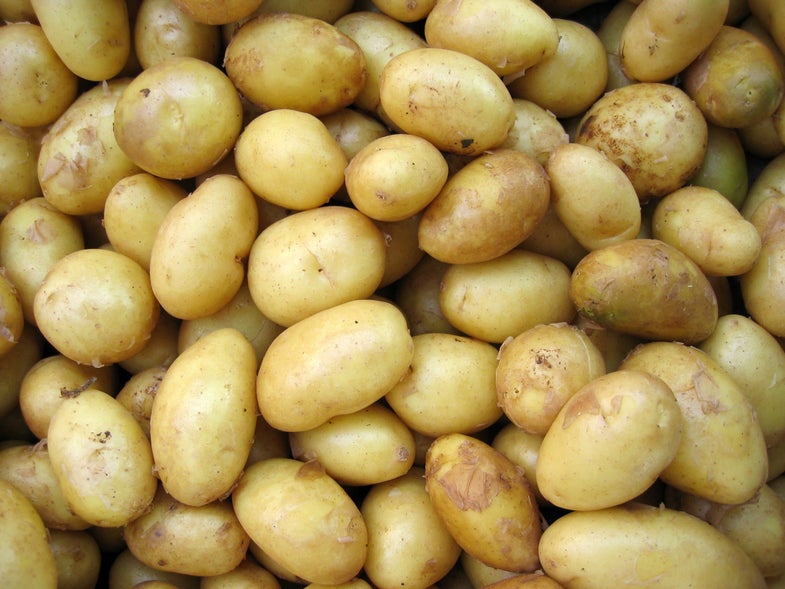 Can you survive on an all potato diet? Its probably not a good idea.
SHARE

For all of 2016, Andrew Taylor ate only potatoes. There were a few caveats to his potato diet: He ate both white potatoes and sweet ones, and sometimes mixed in soymilk, tomato sauce, salt and herbs. He also took B12 supplements. But, overall, he ate potatoes for breakfast, lunch, and dinner. He took four blood tests over the year which he claims all came back normal. He even lost weight and felt more energized.

“If you have to choose one food, if you’re one of the people that’s getting sent to Mars, choose potatoes,” says Taylor. “I’m not trying to be evangelical about potatoes, but it was a really good experience for me.”

First and foremost, it’s not a good idea to only eat one kind of food. To survive, we need 20 amino acids—of which nine are essential, meaning we can’t make them ourselves and must get them from food—as well as a plethora of minerals and vitamins. (And, obviously, we need water in addition to food to keep our cells hydrated so they don’t wither and stop functioning.) Throughout history we’ve often combined foods, like rice and beans, yogurt and nuts, and even macaroni and cheese to a certain extent, in an attempt, or by accident, to intake the proper balance of nutrients that you usually can’t attain from eating a single food item. But in times of famine, fasting, or strange double-dog-dares, there are a couple of foods a human could survive on…at least for awhile.

The potato is one good example. Andrew Taylor isn’t the only person in history who has relied almost exclusively on potatoes for sustenance. In the beginning of the 1800s, about a third of the Irish population got most of their calories from spuds. The average American ate about 113 pounds of these starchy tubers in 2015. “For the money and your blood pressure, you can’t beat a traditional baked spud,” says Joan Salge Blake, a clinical nutrition professor at Boston University.

Technically, the traditional white potato contains all the essential amino acids you need to build proteins, repair cells, and fight diseases. And eating just five of them a day would get you there. However, if you sustained on white potatoes alone, you would eventually run into vitamin and mineral deficiencies. That’s where sweet potatoes come in. Including these orangey ones in the mix—technically, they belong to a different taxonomic family than white potatoes—increases the likelihood that the potato consumer will get their recommended daily dose of Vitamin A, the organic compound in carrots that your mom told you could make you see in the dark, and Vitamin E. No one on a diet of sweet potatoes and white potatoes would get scurvy, a famously horrible disease that happens due to a lack of Vitamin C and causes the victim’s teeth to fall out.

Even with this combo, you’ll still need to eat a lot of spuds before you intake the right levels of everything. Consuming five potatoes would give you all the essential amino acids you need to build proteins, repair cells, and fight diseases. But unless you ate 34 sweet potatoes a day, or 84 white potatoes, you would eventually run into a calcium deficiency. You would also need 25 white potatoes a day to get the recommended amount of protein. Soybeans have more protein and calcium—but they don’t have any Vitamin E or beta-carotene.

Of course, there are a lot of health disadvantages to potatoes, especially when you eat them en masse. White potatoes are high in a kind of carbohydrate that causes your blood sugar to spike and then dip, which puts a strain on the insulin system. People who ate a lot of these tubers were more likely to get diabetes and become obese, according to multiple studies.

Andrew Taylor actually lost weight—probably from eating less overall and giving up sugar—which wasn’t his ultimate goal. He quit eating most food to train himself to get comfort and joy from other areas of his life. But now even though his spud experiment is over, he still gets pretty excited about potatoes. “It was just an experiment and turned out to be exactly like I wanted,” he says.

Foods you can survive on

No nutritionist would get on board with an all-potato diet. Nor would they recommend an all coconut, kale, seaweed, or yogurt one either. There’s a reason that the U.S. dietary guidelines recommends eating a variety of vegetables, grains, proteins, fruits, and oils. Eat any of these just by themselves and you would soon run into the same nutritional deficiencies that you would with a potato. Variety is important, and in this case, it’s vital. So don’t just eat a baked potato, load it with other healthy stuff, too.

**This article originally stated that we need 20 essential amino acids to survive, when, in fact, we need 20 amino acids in total, of which nine are essential. The article has been updated to reflect that. We regret the error.

Ask Us Anything
Nutrition
evergreen
food