Caressing The Future At A ‘Petting Zoo For Materials’

Check out the awesome and weird things we found inside 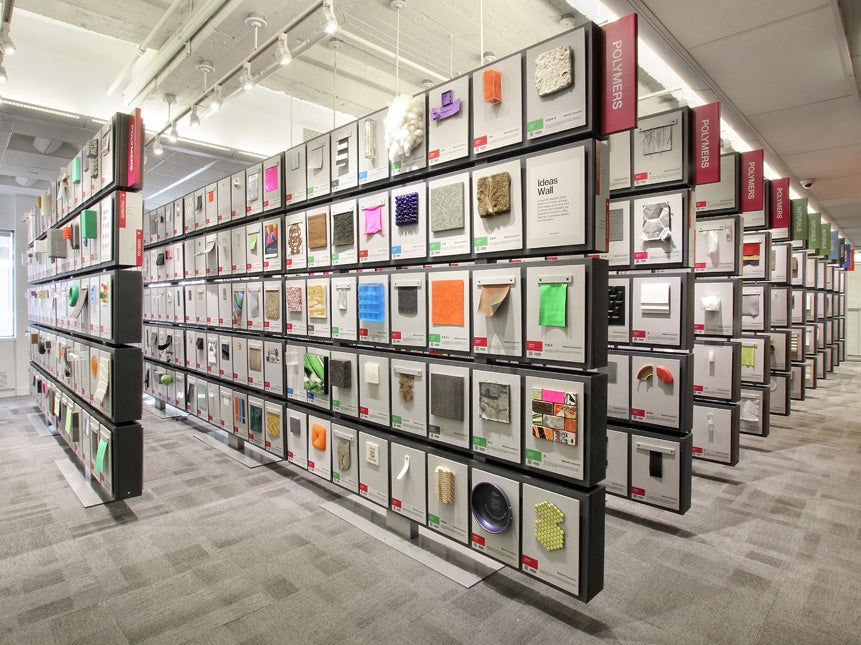 “Cow innards. Packaging made from mushrooms. A floor tile made out of snail poop.”

I’m standing amongst the shelves of one of the largest materials libraries in the world, and Andrew Dent, the library’s curator, is introducing me to some of the colorful samples hanging on the wall in front of us.

On the 17th floor of an office building near Rockefeller Center in New York City, Material Connexion has around 2,500 materials on display for clients to poke, prod, and bend. The library’s original creator called it a petting zoo for new materials. The entire collection includes 7,500 different substances—such as bank cards, sneakers, speakers, shampoo bottles, and other items we interact with on a daily basis—which the company uses to help designers find the right materials to put into their products

“There are many material databases and libraries out there, but none as big or as well-organized as ours,” says Dent. And the collection is growing. Every year, the company adds 500 new materials to the library, after running them by a jury of eight to 12 designers, architects, and engineers. The library encompasses everything from natural products to fabrics, polymers, and 3D-printed gizmos.

Along with finding materials to add to their ever-growing collection, Dent and his colleagues also help match their clients (which include Adidas, BMW, and Logitech) with materials that meet specific performance requirements. “Take for example this coffee cup,” says Dent, picking up my paper Starbucks mug. If a company wanted to start making disposable coffee cups out of something else, Dent says his team would take the performance requirements—it must be able to hold hot liquids; it has to fit printed logos on it; it should be lightweight so it can be shipped—and try to find a substitute.

Other times, companies will be looking for a more sustainable packaging material. And sometimes the requests are pretty far-out—like when BMW wanted to make a car out of fabric back in 2002. The lightweight, shape-shifting GINA car needed a fabric that could stretch, stand up to rain and sunshine, and be impenetrable to rocks and pebbles flying out from under the tires of the car in front of it. Dent’s team suggested a polyurethane-coated Spandex fabric. The car debuted in 2008, but never really evolved beyond a prototype.

BMW Designworks, which helped to create GINA, relies on Material Connexion for about half of its projects. “It’s almost like the Lexis Nexis of materials,” says Sandy McGill, BMW Designworks’ lead designer. “Material Connexion can be this bridge between the science and engineering behind the materials and the creative process. As we explore different materials, it allows us to look at things in a different way, and it sometimes leads us to different discoveries.”

Here are some of the most interesting materials we found while wandering through the library: