The CDC says everyone needs to toss their romaine 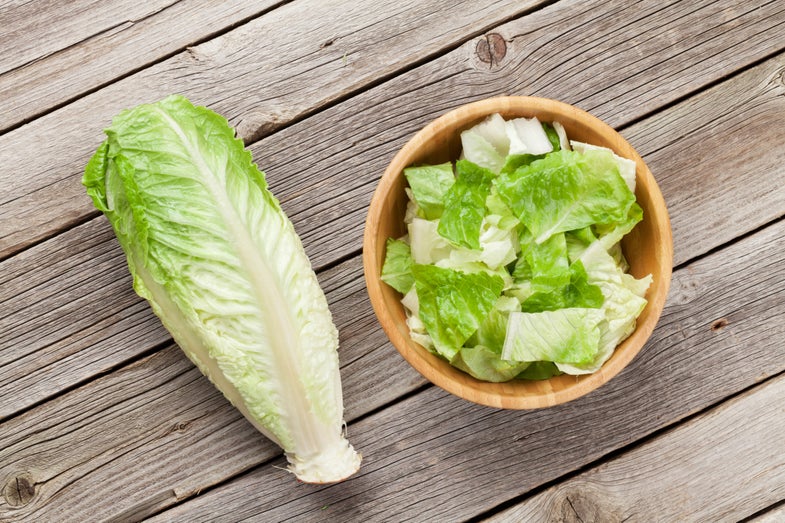 On Tuesday, the Centers for Disease Control and Prevention (CDC) put out a call to toss all romaine, and not in the distribute-the-dressing sense of the word. Seriously: Get rid of all the romaine in your fridge and do not buy more until further notice.

As of Wednesday morning, 32 people in 11 states had been infected with a dangerous strain of the bacteria E. coli, according to the CDC. There are no deaths reported at this time, but there have been 13 cases severe enough for hospitalization and at least one instance of kidney failure. This isn’t merely a U.S. problem, either. The Public Health Agency of Canada reports 18 cases of illness connected to the same strain of bacteria, in Ontario and Quebec.

If you read nothing else in this article, please get rid of any romaine in your fridge—even if you’ve already safely eaten some of it—and eat other kinds of lettuce this holiday season.

Generally speaking, Escherichia coli doesn’t deserve its bad rap. Most strains of the bacteria are harmless, and many of them live safely and happily inside healthy human guts. There are only a few strains of the bacteria that cause harm to humans, but boy can they be a doozy. Like most serious outbreaks, this one is tied to the strain E. coli O157:H7.

This strain produces the potent Shiga toxin, which can damage the lining of your small intestine. It won’t hurt everyone, but it can prove deadly to some.

Where did this outbreak come from?

That’s the problem: no one is sure where this outbreak originated yet. The cases in the U.S. and Canada all share a DNA footprint, meaning the source of the bacteria is likely the same, but the Food and Drug Administration has been unable to tie the contamination to a specific grower yet. If and when they do, they’ll be able to pull the potentially-affected leaves from the shelves and warn consumers about specific brands. But for now, the best way to prevent further cases is to ditch romaine entirely.

In a broad sense, E. coli outbreaks happen when there is some kind of fecal contamination. That doesn’t mean your lettuce was once covered in poo; bacteria from livestock pastures can find its way to nearby fields by way of rainwater or other sources of runoff.

What should I do?

Get rid of your romaine lettuce. Really. We do not lightly recommend big bouts of food waste, but given the lack of info about this outbreak this is truly the only way to be safe. This doesn’t just include bags of romaine hearts, either: check salad blends and other bags of chopped lettuce to be safe. The CDC recommends cleaning any parts of the fridge that contained romaine. This may seem excessive, but an abundance of caution is understandable this time of year. People are about to do a whole bunch of cooking and a whole lot of eating, and no one wants a dangerous bacterial pathogen to join the holiday festivities.

Can I at least compost the lettuce?

Unfortunately, the answer is no. While most pathogens will die in the heat of a compost pile, this strain of E. coli will continue to thrive in such temperatures. Even large-scale compost operations have to be very careful to make sure they hit the right heat to eradicate the strain, and at-home compost piles don’t stand a chance. If you put potentially contaminated produce into a compost pile, you’re risking the contamination of whatever garden that compost is headed for—so don’t do it.

What happens if I eat contaminated lettuce?

Some people will eat food tainted with dangerous E. coli and not notice any effects, which is why it’s so important to get rid of lettuce even if some members of the family have safely eaten it. Even if you feel fine, you might get sick later. Symptoms start an average of 3-4 days after consumption, but can begin as much as 10 days later. Here are the signs to watch out for:

Having these symptoms does not mean your life is in danger. Most people with this kind of food poisoning recover within a week. The important thing is to stay as hydrated as possible, and to wash your hands frequently to avoid passing the bug to other members of your household. According to the CDC, the time to get in touch with a doctor is “if you have diarrhea that lasts for more than 3 days or is accompanied by high fever, blood in the stool, or so much vomiting that you cannot keep liquids down and you pass very little urine.”

Even if the GI symptoms begin to improve, it’s important to keep an eye on those with E. coli poisoning, especially if they’re old or particularly vulnerable to infection. About 5 to 10 percent of patients experience a type of kidney failure called hemolytic uremic syndrome (HUS), which usually appears about a week after infection. Most will recover, but the condition can cause permanent kidney damage or even prove fatal. Signs of this complication include:

So, does this mean no salad?

Nope! Romaine is just one type of lettuce, my friends. Consider making a salad built on butter lettuce, endive, or spinach. Truly, the world is your oyster. Eat as many non-romaine veggies as possible this holiday season, or you’re liable to have poop problems for other reasons entirely.