Scientists are scrutinizing city sewage to study our health

It's not just useless crap. 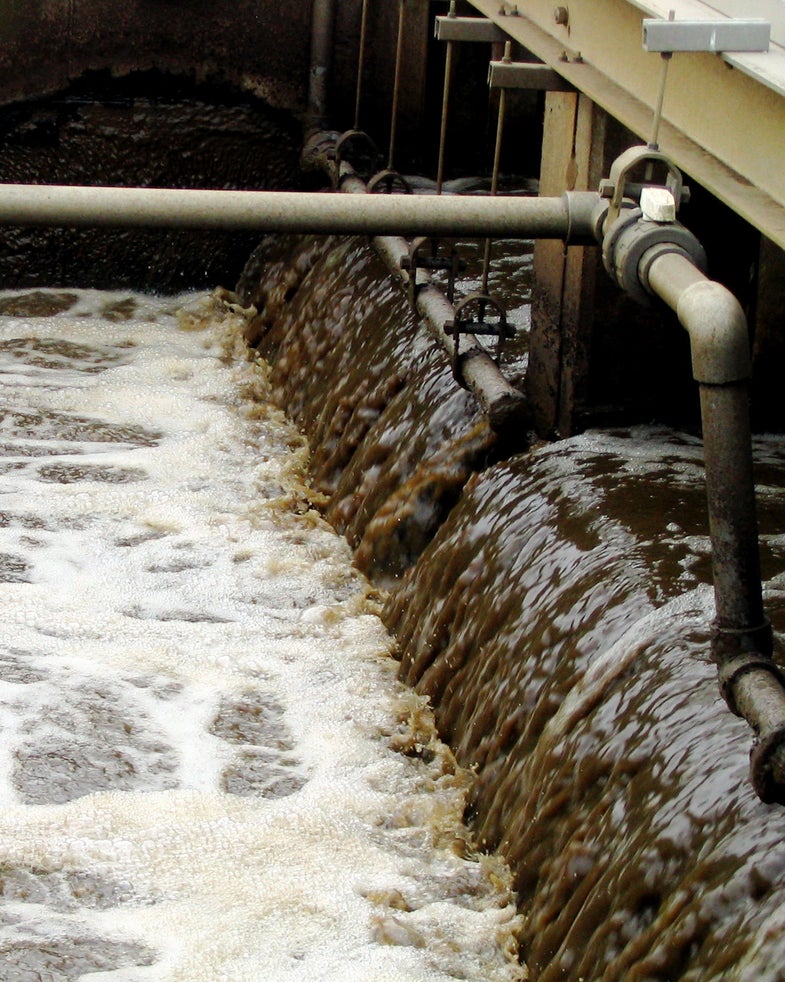 Every day, more than 30 billion gallons of wastewater gushes through treatment plants in the United States. All of that poop, urine, soapy water and other waste might seem like a smelly nuisance. But it’s also a goldmine of information. The drugs we use, germs we encounter, and hormones our bodies pump out all wind up in sewers.

“The wastewater treatment plant is the one point where everything flows together,” says Rolf Halden, an environmental engineer and sustainability researcher at Arizona State University in Tempe. “It’s a great observation point to find out what we’re doing to the environment and to ourselves.”

That means a city’s effluvia can reveal a lot about the health and behavior of its inhabitants. Scientists are beginning to comb through sewage to track drug abuse, pathogens, chemical exposure, and markers for certain illnesses. They can test wastewater as it enters a treatment plant, or examine the sludge remaining afterwards to see what hasn’t been broken down.

This burgeoning field, known as sewage epidemiology or wastewater-based epidemiology, could offer a smelly but efficient route to improving public health.

“I call the sewers the undiscovered information superhighway,” Halden says. “Sure they’re smelly, but we’re already used to analyzing urine and stool for medical purposes. This just takes it to a different scale.”

Sewage offers a few advantages as a pool of information. For one thing, it’s anonymous. And yet it captures a little something from everyone. “You can pretty much guarantee that most people are going to be using the sewer system,” says Dan Burgard, an environmental analytical chemist at the University of Puget Sound in Tacoma, Washington.

And it’s fast. To find out about health and drug use, researchers typically rely on surveys and data collected by hospitals or during arrests. “There’s often a substantial lag time, as many as two or three years sometimes, before that data become available,” says Kevin Bisceglia, an environmental chemist at Hofstra University in Hempstead, New York. Besides, “If you ask someone about their illegal behavior they’re not necessarily going to tell you accurately.”

Sewage offers a more immediate—and honest—snapshot of what the city is up to. “Sometimes a million people or more are represented in a single 24-hour sample,” Halden says.

He and his colleagues have examined how chemicals in our waste can seep into the environment. In 2002, they found that triclocarban, an ingredient in antibacterial soaps, was not broken down during wastewater treatment. It showed up in sewage sludge, the solid muck left after treatment that is sometimes used to fertilize crops. “That opens a pathway for chemicals…potentially being taken up by plants and making it right back to our dinner plates,” Halden says.

A chemical that won’t break down during treatment and likes to collect in solids is worrying, he adds. “It’s actually the same chemistry that will persist in our bodies when we get exposed and will become sequestered…in body fat.”

Halden and his colleagues found that triclocarban and a similar chemical, triclosan, were persisting in sewage sludge at treatment plants across the nation and polluting Minnesota’s freshwater lakes. There’s some evidence that these chemicals may disrupt the body’s hormonal activity. Plus they don’t seem to be more effective at preventing sickness than washing with regular soap and water.

Halden and his colleagues reported their concerns to multiple federal agencies and at a congressional briefing panel. In 2016, the U.S. Food and Drug Administration banned the chemicals from over-the-counter antibacterial washes and soaps.

Sewage can also reveal what germs are brewing in a city. “When someone gets sick they shed a huge amount of bacteria or viruses,” Halden says. “Even a few sick individuals create a signal in the sewage, and we can measure that.” Those pathogens can serve as an early warning that an outbreak is at hand. Israel has been using its sewers to monitor polio virus for decades.

With climate change and warming temperatures, different pathogens are expected to migrate away from the tropics. “We can actually follow the invasion of Zika virus and other viruses by looking at wastewater,” Halden says. Scientists could also track germs over time to watch for developing antibiotic resistance.

Waste may give a rough sense of a community’s overall health. “When you go to the doctors office you would never think twice about handing your specimen over,” Halden says. Sewage surveillance is a bit like taking a urine or stool sample from an entire city. Scientists could examine how often certain medicines are prescribed, or look for hormones and other chemicals our bodies make that can indicate stress or certain illnesses. Bisceglia and his team have measured cotinine, a breakdown product of nicotine, in Boston wastewater to calculate how many cigarettes the city’s smokers consume per day.

Illegal drugs also leave their mark in sewage. These traces can reveal patterns of use, the emergence of new drugs, or whether law enforcement strategies are working. “If they have a major drug seizure in a particular community, do they actually see that drop in use?” Bisceglia says.

For years, Europe has monitored drugs like cocaine and ecstasy in sewage. A continent-wide network has sampled urine and poop from more than 60 cities and towns. It has started to detect regional patterns—like how cocaine is more popular in southern and western Europe, and ecstasy and cocaine tend to be urban drugs.

Sewer surveillance is still catching on in the United States. Burgard has seen how Adderall use spikes on college campuses around finals. Now, he’s investigating whether cannabis legalization will prompt people to consume more or less marijuana. He’s also interested in whether pot shops are replacing the black market. By tracking how much weed is sold legally, he can predict how much should end up in sewers. “We can subtract that amount out form what we find in the wastewater to get a sense of…the illicit market,” he says. He recently finished sampling from two treatment plants in western Washington.

Researchers are considering whether sewage might shed some light on the opioid epidemic. Unfortunately, this will be difficult. Heroin is quickly converted into morphine, and morphine in wastewater will be flowing from legal sources like hospitals too. “I can give you exactly how much morphine is in our samples, but telling you where it comes from is difficult,” Burgard says.

Then there’s fentanyl, a synthetic opioid that is 50 to 100 times more potent than morphine. That means people need to use less to get high, and it’s harder to find because the concentration is low. And other opioids can be difficult to pick out too. “Even though there’s been a huge uptick in opioids that’s still a fairly small percentage of the population, far less than is using marijuana and cocaine,” Bisceglia says.

There are a few other disadvantages to working with sewage.

For one thing, there are concerns about privacy. Now, nobody’s poop is going to be plucked from the sewers and individually scrutinized. But cities worry they might be stigmatized if a nonzero amount of any drug shows up in their waters. “At that point you can say City X has a cocaine problem or a methamphetamine problem,” Burgard says. “Every city has a wastewater treatment plant, but every city may not want somebody poking around and measuring their wastewater.”

Researchers can also capture sewage before it reaches the local wastewater treatment plant. But the closer you sample to sewers leading from a neighborhood, dorm, or clinic, the less anonymous the poop and urine becomes. “You’re pitting neighborhood against neighborhood,” Burgard says. “Does that mean more police crackdowns, or does it mean more funding to provide public health benefit programs? The individual privacy is probably not a concern, but how it affects an area of the city can be of concern.”

And sewage is full of refuse that may obscure the particular chemical scientists are hoping to find. It’s not like when you hand over a urine or stool sample at the doctor’s office and it is immediately whisked away for analysis. Sewage has traveled through pipes and mixed with discharge from businesses and storm water. “It really becomes a chemical detective task, of finding…the needle in the haystack of tens of thousands of chemicals coming though the pipe,” Halden says.

By now, he has analyzed more than 250 chemicals. He and his colleagues run the National Sewage Sludge Repository, where they have gathered sludge samples from more than 200 American wastewater treatment plants, representing more than 32 million people.

Typically, Halden and other sewage science enthusiasts collect their samples from treatment plants. They do not typically go clambering around in sewers. “What you want avoid is to be out there on a busy road, removing a very heavy manhole cover, and then climbing in to the sewer,” he says.

They rely on samples gathered throughout an entire day. “If you just take a sample at any given point in time then you would only get a representation of people who had just urinated or defecated into the sewer,” Halden says.

Sludge samples tend to be dark and murky, while wastewater is cloudy. “It’s not as disgusting as it sounds, and there’s usually nothing identifiable by that point. It’s just cloudy gray water,” Bisceglia says. And samples that were collected near a dorm or other building can carry flecks of toilet paper, hair, or chewed up gobs of food, Burgard has discovered.

Sewage is nowhere near as smelly as undiluted poop. Burgard is in the midst of a study about how the body breaks down and excretes THC, the active ingredient in marijuana, and has been asking people to submit bagged urine and feces. “I thought wastewater was bad, but bagged feces is actually much worse,” he says.

Still, Bisceglia says, sewage samples retain a pretty strong whiff of sulfur. And these samples must be handled carefully until any pathogens can be filtered out. “We…have to assume that anything is in there, HIV, hepatitis viruses and everything you can expect to be represented in a large city,” Halden says.

But he and his colleagues persist in filtering these samples and identifying what germs and chemicals float within their pungent depths. The rest of us may forget about the poop, urine, and dirty water that goes whizzing down the sewer as soon as we flush or turn off the tap, but it can still serve us.

“We are able to collect, for very little money, a huge amount of information on public health that will help us in preventing diseases and pinpointing exposures,” Halden says.