Who Birthed the Electric Plane?

The race for 100 miles per gallon, in the air 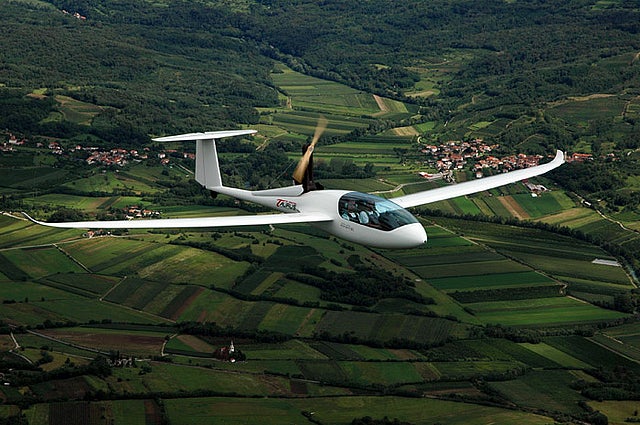 The small airplane is too dirty for an environmentally threatened world. That’s not the view from eco-activists, but from some of the leading lights in general aviation—the category encompassing small planes such as Cessnas flown by citizen pilots. “At some point, some environmental group is going to figure out that small aircraft fly leaded fuel,” said Mark Moore, NASA’s personal air vehicle program manager, to a meeting of engineers, aviation advocates and a billionaire corporate titan with his own private jet. Their goal, however, is not to bury private aviation, but to remake it as the greenest form of personal transit.

The second annual Electric Aircraft Symposium was held in late April at the most fitting location—a hotel conference room a stone’s throw from San Francisco airport, the gateway to Silicon Valley. (Advanced electronics will be as crucial to aviation as it is to Google or Intel.) The list of benefits starts with efficiency. Three hyper-technical presentations at the meeting (despite being packed with impenetrable terminology) made one point clear: electric motors are virtually magical. While it’s remarkable for an internal combustion engine to achieve anything over 20 percent efficiency, electric motors commonly hit well over ninety. Hook that system up to a fuel cell or battery charged by wind or solar power, and the filthy personal airplane becomes the greenest form of transportation—maybe even beating any future winner of the $10-million dollar, 100-mile-per-gallon Automotive X-Prize.

“When your 100 mpg car is stuck in traffic and a 100 mpg airplane whizzes overhead, you’re jealous,” said Brien Seeley, the conference organizer. Seeley isn’t jumping on the now-fashionable green bandwagon; he’s been obsessed with green flight for decades. It started in 1981, when he and his wife, Anne, were on a cross-country trip, flying in one plane while Anne’s parents were in another. At one of the airports along the way, Seeley challenged his father-in-law, a fellow ophthalmologist, to a battle of fuel-efficiency. Shortly afterwards, and despite his full-time job as a surgeon, Brien Seeley, together with Anne, founded the Comparative Aircraft Flight Efficiency Foundation (CAFE), a nonprofit organization that evaluated fuel-efficiency and other performance aspects of personal aircraft.

Many of those planes have been homebuilt models, part of a phenomenon that took off in the 1970s, when hobbyists began buying kits designed by aviation engineers such as Burt Rutan. In 2004, Rutan’s team won the $10 million Ansari X-Prize for building the first civilian craft to take passengers into space twice within two weeks.

Seeley believes that a cash prize can drive development of clean aircraft just as it did for spacecraft and may soon do for super-efficient automobiles. The challenge is to get a trifecta: 100 miles, at 100 miles per hour and the energy equivalent of 100 miles per gallon of gasoline, in a plane that is not only efficient but also comfortable and easy to operate.

The search is now on for a funder. At the meeting, Seeley and other speakers mentioned Google as a possibility. More than wishful thinking, it was a not-so-subtle hint to the mega-corporation’s co-founder, Larry Page, who sat a few feet from the speaker’s podium. While Page hasn’t pledged any money yet, his interest is strong. “He’s been at every event we’ve had,” said Anne Seeley. (Google has already funded a $30-million Lunar X-Prize for the first team to send a robotic spacecraft to the moon.)

The CAFE foundation will host a mini-version of the Green Prize in August, awarding $50,000 to the most efficient aircraft. It’s one of five NASA-funded prizes, totaling $300,000, that will be awarded as part of CAFE’s General Aviation Technology Challenge.

A New Kind of Plane

Electric power can improve the efficiency of not just an airplane’s power system but its entire design. “There’s all sorts of degrees of freedom in electric propulsion that we haven’t exercised yet,” NASA’s Moore told the meeting. “These aircraft should not look the same. They should be very different.” Unlike gas engines, which become less efficient when scaled down, electric motors are efficient regardless of size. So Moore proposes “distributed propulsion”— replacing the one- or two-engine “hotdog with wings” plane design with new craft sporting four, six, or eight motors.

Today’s aircraft fly by pulling their wings through the air fast enough to generate the flow that produces lift. Drop below that speed, or pitch the plane at the wrong angle, and you stall out—the wings stop producing enough lift, and the plane drops like a brick.

But put the motors on or even inside the wings, and the propellers blow air directly over them, at the optimal angle. You start producing lift while the plane is standing still. It’s not enough for the plane to shoot straight up, but it allows a shorter take-off and a lower chance of stalling.

The Quest for Power

The green plane faces the same challenge as any other electric device—battery life. A dead battery cutting short a cell phone call is annoying; but cutting short a flight could be deadly.

One way around the problem is to make a plane that doesn’t need an engine. Pipistrel, a Slovenian plane maker, had begun building gliders with electric motors and enough power from lithium-ion batteries allow them to take off on their own, without a tow from another plane. The planes are marvels of efficiency: a two-seater weighs just 705 pounds.

In the US, engineer Greg Cole is developing a fully powered, two-seater plane with ultra-high efficiency. It should require a maximum of 36 horsepower when climbing and as little as 7 horsepower to stay aloft. But even with those modest requirements, it will be able to carry only enough lithium-ion batteries (230 pounds worth) for one hour in the air—not quite enough for even recreational flight. While planes commonly rent out for an hour at a time, they are required to carry enough fuel for nearly two hours, in case of emergencies that keep them in the air longer than planned.

The limited battery life mirrors the dilemma that electric cars face. And in both cases, hybrid gas-electric engines provide a solution, according to Ron Gremban. A pilot since 2001, Gremban is also technology director of the California Cars Initiative (CalCars), an organization promoting super-efficient plug-in hybrids that can run longer on electricity alone than today’s hybrids. (Gremban hacked the first plug-in Toyota Prius.) He proposes the same fix for small airplanes that would run mostly on battery power but extend their range with small gas engines that drive a generator. According to Gremban, just one gallon of gas could keep a small plane in the air for an extra half-hour.

As with cars, future super batteries could also make long-range electric-only planes possible. Professor Yi Cui of Stanford University believes he can pack more power into batteries by replacing the rigid framework in today’s cells with a flexible mat of silicon nanowires that swells to hold up to ten times as many lithium ions.

Brien Seeley believes that clean, long-range planes, together with automatic or semiautomatic navigation systems will open the skies for more short-range flights—cleaning up both traffic and smog. “It’s time to get off the pavement,” said Seeley.