Sleek designs, robotic aircraft and next-generation weapons will make the ships of the future the most formidable ever 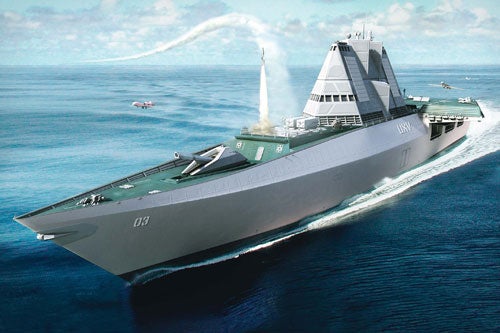 It’s hard to tell what kind of wars the future will bring, but one thing is certain: Robots will be doing much of the fighting. In fact, they already are. Last year, aerial drones flew 258,502 hours of missions—up from 27,201 in 2002. Spending on unmanned aircraft systems by the U.S. military is expected to hit $3.76 billion by 2010. Robotic warfare, long the stuff of science fiction, is now a reality.

From a ship-design standpoint, the best thing about unmanned vehicles is that they can be launched from small spaces that a manned craft simply can’t. “It’s a violent thing to launch an aircraft off a carrier—you can only stress the human being so much,” says Charles Thompson of BAE Systems. Take the human out of the equation, and you can launch a vehicle from a much smaller space—which saves room and allows the UXV to function both as a fast, stealthy warship and an aircraft carrier at the same time. On the UXV, two 164-foot decks joined in a V shape would slingshot unmanned vehicles into the air using electromagnetic catapults and ramps. Radars, infrared sensors and radio-frequency identification (RFID) tags could organize vehicles as they take off and land.

Although it may sound radically new, the UXV actually borrows its basic design from a ship that’s already being built: BAE’s Type 45 Daring-class destroyer, a stealthy but massive warship set to join Britain’s Royal Navy in 2009. Like the Type 45 destroyers, the UXV could measure some 500 feet long and run on diesel-powered electric turbines. Type 45s can reach a top speed of more than 27 knots, or 31 mph; the UXV should clock similar times.

But unlike most of its predecessors, the UXV could run effectively with minimal crew. Battleships once carried hundreds of sailors; the UXV could run with a crew of only 60, enough for three shift changes, along with a handful of additional crew members to service the drones.

Ships take years to build, so to be relevant after 2020, when it’s expected to arrive, the UXV needs to be versatile. That’s why BAE engineers, working with the American defense contractor General Dynamics on a separate project, developed a concept they call “modular mission bays,” a set of plug-and-play features that would enable commanders to quickly “re-role” the boat. The UXV could change from submarine hunter to mine sweeper to a platform for supplying ground troops to a launching pad for drone-based air strikes.

When they’re not in battle, the UXV’s various drones would be stored on other ships or land bases; when the UXV receives a mission, the relevant drones would be dispatched to it. For a sub-hunting expedition, the UXV might load up with unmanned underwater vehicles, high-tech radars, torpedoes and even manned aircraft like the Super Lynx sub-hunting helicopter. On a mine-sweeping mission, it would deploy aerial drones to peer beneath the waves and destroy hidden threats. To supply ground troops in battle, it would host troop-carrying landing craft, support-attack helicopters and other armored vehicles.

The UXV should also pack enough heat to give all these assets cover. On the foredeck, missile batteries could house both surface-to-air and ship-to-ship missiles and cruise missiles. A large-caliber gun that fires six-inch munitions, 20 rounds at a time, provides incredible power for ship-to-ship fighting and for strafing a variety of targets onshore. And a 155-millimeter medium-caliber gun would return enemy fire while troops hit land.

When plans for the UXV hit the Web recently, some commenters sniped that the ship was destined to be the warship of a robot uprising. But that’s unlikely. As with today’s drones, most of the aircraft on the UXV would be controlled by remote human operators. Still, a smaller crew on board and fewer pilots in planes could mean fewer lives lost in almost any battle scenario.

Check out the whole future fleet, and look inside the UXV, in our gallery here.

Purpose: This is a small, fast ship (capable of 45 knots) for sub-hunting, mine-clearing, and fighting small boats near coastlinesa€”the littoral region. Each LCS would be equipped with one of three distinct mission modules: a set of plug-and-play ship sensors, missiles, small boats, unmanned underwater vehicles and specially equipped helicopters, for mine warfare, anti-submarine warfare or surface combat. The base configuration would include antimissile batteries and a medium-caliber gun. The ships could clear mines and chase subs away from an area before the rest of the fleet arrived. Replaces: Analysts say the LCS is likely to replace 30 frigates and 14 mine-warfare ships. Status: The Navy asked both Lockheed Martin and General Dynamics to create a ship, and the two companies came up with wildly different designs. Lockheed Martin’s USS Freedom, or LCS 1, which launched in September 2006, features a semi-planing hull designed to lift partially out of the water for lower friction at high speed. General Dynamics hopes to deliver its high-speed trimaran, the USS Independence, by mid-2008. Prognosis: Iffy. According to a Government Accountability Office report, the Navy changed design requirements as LCS 1 was being built, leading to expensive reconfigurations and pushing costs from an estimated $472 million to $1 billion for the pair. The Navy canceled two follow-on ships, and the cost overruns jeopardize the anticipated 55-ship orderaand by extension, the entire 30-year plan. As Robert Work of the Center for Strategic and Budgetary Assessments put it, aUntil the Navy can prove that it can build affordable ships, it’s not clear that we can get to 313.a 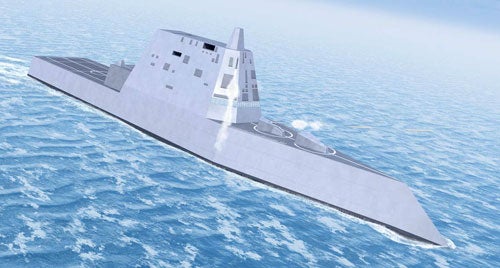 Purpose: This 14,500-ton destroyer’s mission is to pound enemy positions in support of troops onshore. The DDG 1000 features a atumblehomea hull, which hasn’t been used by the world’s navies since two major sinkings in the early 1900s. Boosters say the design, which resembles an inverted V, will give the ship a stealthy, low-radar profile by deflecting radar signals skyward. Some critics argue that the broad base of the tumblehome hull makes the ship more likely to capsize in rough seas. But that’s up for debate. aThere’s a slight advantage to having an angled superstructure, in that your wind moment is actually a little bit less,a says David McMillan, president of Aker Yards Marine, a commercial-ship design company based in Vancouver. Translation: The same sloping design that helps keep the ship off radar screens should also make it less likely to capsize, because it will present less surface to be pushed over by winds. An electric drive system will create a single source of power for the DDG 1000. Gas turbine engines will create electricity that can be diverted for any task. Under full throttle, the ship’s power could be used mainly for propulsion; in battle, that power could be used to fire energy-intensive future weapons such rail guns, which launch projectiles using magnetic force. Replaces: The Navy says the DDG 1000 is a new class of ship and thus won’t replace anything older. But some analysts believe it will fill the gap left by the retirement of Iowa-class battleships in the 1990s. Status: The Navy has contracted Northrop Grumman and General Dynamics to each build a DDG 1000. The first, to be launched in 2011, will be the USS Zumwalt, and all future DDGs will be called Zumwalt-class. Prognosis: The Navy plans to build seven DDG 1000s, and Congress has approved more than $6 billion for the two ships already commissioned.

Purpose: The Navy will confirm little about the CG(X) program, but analysts say the ship’s job will be to protect a fleet from aerial and missile attack. At least two versions of this ship are being considered. The first could use the same hull as the DDG 1000, replacing one of that ship’s guns with additional missile cells and upgrading to a radar system optimized for missile defense. The second could be a larger (23,000 tons instead of 14,500), nuclear-powered ship designed for ballistic-missile defense. Robert Work says that yet another version could provide ballistic-missile defense to the U.S. mainland. Replaces: The planned CG(X) will replace the Navy’s aging fleet of Ticonderoga-class guided missile cruisers. Status: The Navy plans to order the first CG(X), whatever its final form turns out to be, in 2011. From there, analysts expect the Navy to build up to a fleet of 19 CG(X)s by 2030. Prognosis: The fate and eventual configuration of the CG(X) depends on the success of the DDG 1000, as well as on the choice of propulsion. 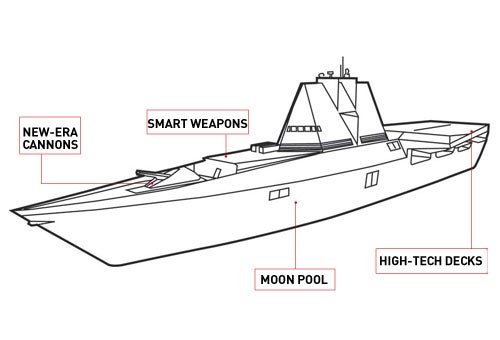 The UXV Combatant Up Close

**NEW-ERA CANNONS
** Next-generation cannons could fire bursts of 20 rounds in successiona€”and have the munitions all arrive on target at the same instant. **SMART WEAPONS
** The foredeck could house superlight vertical-launch missiles, ultra-precise Phalanx missiles (which can shoot down incoming rockets traveling as fast as Mach 3) and cruise missiles. **MOON POOL
** From a hidden pool in the ships interior, unmanned subs could deploy and return to the craft safely and invisibly. **HIGH-TECH DECKS
** On deck, electromagnetic catapults could launch unmanned aircraft from adjustable ramps. Radar, sensors and RFID chips could be used to organize the drones.
Military
Navy