Zero to "oh my god did that drone just come from under the water" in seconds. 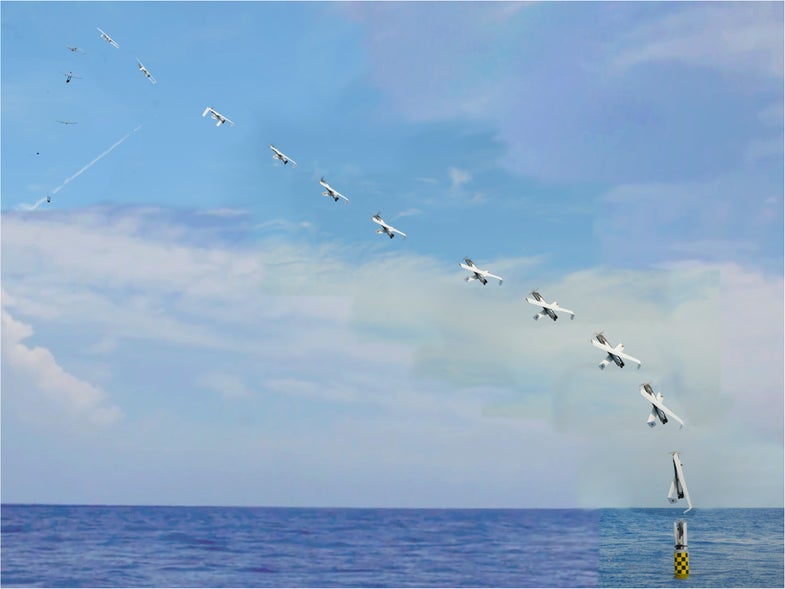 Getting aircraft into the sky typically requires a dedicated launching area—usually a flat, sturdy surface. These are hard to come by in the middle of the ocean. Aircraft carriers are one way to bring runways to the sea, but they are giant and expensive, and they must travel with a full fleet for protection and support. What if there were a simpler way? Freed from the constraints of an onboard pilot and static wings, the Naval Research Laboratory’s XFC drone is launched from a tube and assembles its wings midair. Four years ago, the XFC flew for six hours straight. Yesterday, it launched from a submerged submarine for the first time.

Powered by a fuel cell, the XFC (for eXperimental Fuel Cell, and sadly not for Xtreme Flying Cod), fits into a special launch system called the Sea Robin. The Sea Robin, in turn, fits into a torpedo tube on the USS Providence sub. When it’s launch time, the torpedo tube spits out the Sea Robin, which then bobs on the water’s surface like a buoy. Using an electric launch system, the Sea Robin sends the XFC into the sky, where (as the above picture demonstrates), its wings spread out for flight. The XFC flew for several hours, sending streaming video back to the submarine and other support vessels. It then landed at a Navy testing center in the Bahamas.

While the XFC is an experimental concept, its future applications are plentiful. Drones like the XFC, with launchers that fit in both torpedo tubes and the tubes used for Tomahawk cruise missiles, mean more naval vessels can scout the seas from above, and do so even from under the water.