This hydrogen-burning hypersonic airliner could fly more than twice as fast as the 1,350mph Concorde--and its passengers would travel absolutely guilt-free 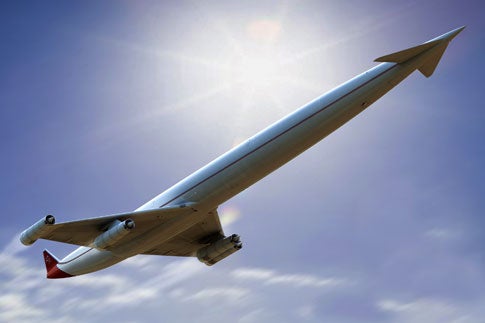 Modern air travel is a marvel. It’s also a source of endless delay, annoyance and planet-killing greenhouse gases. A proposed hydrogen-powered hypersonic airliner could change all that. The plane is Reaction Engines’s A2 concept, a Mach-5 (3,400mph) craft for 300 passengers funded in part by the European Union’s Long-Term Advanced Propulsion Concepts and Technologies project (Lapcat). Lapcat wants an airliner that can fly from Brussels to Sydney in less than four hours. If built, the A2 will do just that–without producing a trace of carbon emissions.

Engineers created the A2 with the failures of its doomed supersonic predecessor, the Concorde, very much in mind. Reaction Engines’s technical director, Richard Varvill, and his colleagues believe that the Concorde was phased out because of a couple major limitations. First, it couldn’t fly far enough. “The range was inadequate to do trans-Pacific routes, which is where a lot of the potential market is thought to be for a supersonic transport,” Varvill explains. Second, the Concorde’s engines were efficient only at its Mach-2 cruising speed, which meant that when it was poking along overland at Mach 0.9 to avoid producing sonic booms, it got horrible gas mileage. “The [A2] engine has two modes because we’re very conscious of the Concorde experience,” he says.

Those two modes–a combination of turbojet and ramjet propulsion systems–would both make the A2 efficient at slower speeds and give it incredible speed capabilities. (Engineers didn’t include windows in the design because only space-shuttle windows, which are too heavy for use in an airliner, can withstand the heat the A2 would encounter.) In the A2’s first mode, its four Scimitar engines send incoming air through bypass ducts to turbines. These turbines produce thrust much like today’s conventional jet engines–by using the turbine to compress incoming air and then mixing it with fuel to achieve combustion–and that’s enough to get the jet in the air and up to Mach 2.5. Once it reaches Mach 2.5, the A2 switches into its second mode and does the job it was built for. Incoming air is rerouted directly to the engine’s core. Now that the plane is traveling at supersonic speed, the air gets rammed through the engine with enough pressure to sustain combustion at speeds of up to Mach 5.

That’s the principle behind all ramjet designs. But the Scimitar’s system goes further by adding a turbine compressor that squeezes air even more intensely. This is a big departure from traditional ramjet design; these air-breathing engines normally can’t use turbines because the air enters the engine at such a high temperature–1,800ºF at Mach 5–that turbine blades would quickly melt. In the Scimitar, though, a cooling system wrapped around the inside of the engine cools incoming air enough to let it run through a turbine. As a result, the A2 has a setting for every speed.

But an even greater asset than the A2’s speed is its negligible carbon footprint. It’s hydrogen-powered, so it produces only water vapor and a little bit of nitrous oxide as exhaust. And although a hypersonic jet loaded with liquid hydrogen might sound dangerous, hydrogen fuel is actually no more explosive than normal jet fuel.

Joseph Schetz, a hypersonic-propulsion expert at Virginia Tech, says there’s nothing fundamentally unsound in the A2’s plans, “but whether it’s doable or not is a whole other conversation.” The engineers still face crucial design obstacles, such as building heat exchangers reliable enough for hypersonic flight.

The biggest challenge: manufacturing hydrogen fuel on a large scale without emitting carbon in the process. Indeed, Varvill is hesitant to pitch his plane as a truly green machine because he believes carbon-free hydrogen production is still a long way off. If a viable hydrogen economy comes to pass, though, the A2 could very well be the new airliner of choice.

For takeoff, landing and subsonic flight, the A2’s Scimitar engine sends intake air through a bypass duct [1] and into a turbine [2], like a standard jet engine. After reaching supersonic speed, though, the engine redirects air from the bypass duct through the engine core [3] for flight up to Mach 5. Like a ramjet, the Scimitar works by taking in air from the atmosphere at high speeds and funneling (or “ramming”) it until it’s intensely compressed. At this point, the extremely hot air mixes with fuel and causes ignition. But the Scimitar one-ups traditional ramjet design by adding a turbine [4] that compresses the incoming air even further. Ramjets usually can’t use turbines because the incoming air is so hot that it will melt the turbine blades. The Scimitar solves that problem by first cooling the air in a heat exchanger [5] using gaseous helium.

The A2 runs on liquid hydrogen, which produces water vapor and a small amount of nitrous oxide as exhaust and is energy-dense enough to fly this plane all the way from Brussels to Sydney. To be truly green, however, the A2 must use hydrogen produced in a carbon-neutral process such as electrolysis powered by a nuclear, solar or biofueled power plant.
Concept Cars
Vehicles