The future of spycraft looks pretty heavy, if this new Boeing plane is any indication. Adding to today’s parade of... 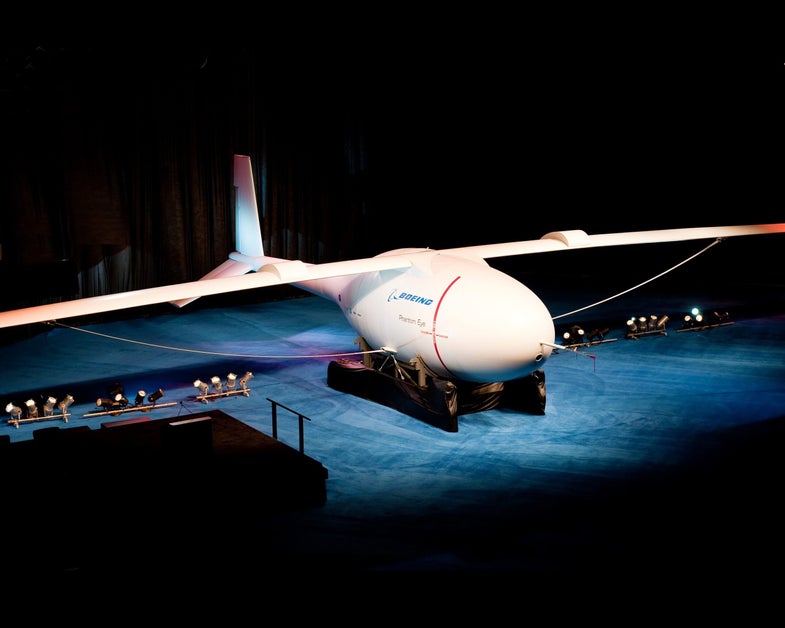 The future of spycraft looks pretty heavy, if this new Boeing plane is any indication. Adding to today’s parade of pretty new planes, Boeing unveiled a hydrogen-powered unmanned aircraft system Monday that will stay aloft at 65,000 feet for four days.

The Phantom Eye is not exactly sleek, but it’s one of the greenest aircraft out there — its only byproduct is water.

The aircraft heralds a potential new market in data and communications collection, Boeing says. Later this summer, it will be shipped from Boeing’s Phantom Works facility in St. Louis to NASA’s Dryden Flight Research Center for ground and taxi testing. The debut flight will likely take place next year and should last four to eight hours, a mere preview of the aircraft’s apparent capabilities.

In terms of power, Phantom Eye is a lightweight — it has two 2.3 liter, four-cylinder engines that provide 150 hp each, not much more than your average car. This makes sense, because Ford provided the engines, according to a Boeing news release.

Phantom Eye evolved from Boeing’s Condor aircraft, also powered by a piston engine, which made history by reaching a top altitude of 67, 028 feet. Its likely descendants include the Phantom Ray drone, which looks like a slim B-2.