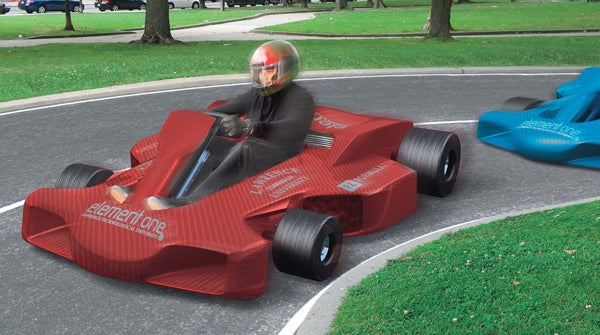 When Lawrence Tech’s Element One team won top honors in the first-ever Formula Zero design competition—a contest created by two Dutch auto designers to get young engineers interested in hydrogen cars—they received two prizes: a fuel cell, and a deadline. The award meant they had the green light to build their design and race against other student teams in the Formula Zero hydrogen-powered go-kart race, which starts this month in the Netherlands. And just like that, they were off, scrambling to get their kart ready in time.

For maximum power, Element One paired their fuel cell with ultracapacitors, which can rapidly discharge power for intense acceleration and recharge quickly in pit stops. But to reach 60mph-plus racing speeds with a modest 48-horsepower electric motor, they also needed to make their kart as light as possible. “Rather than going with a steel tubular frame like most of our competitors, we built a 100 percent non-tubular carbon-fiber frame, which is normally used in the airline industry, and it saved us 40 pounds,” says body-and-chassis team leader Camille Robbins. The risk with a stiff, non-tubular carbon frame is that it might crack under pressure, but the team, whose 7-by-5-foot kart weighs in at 450 pounds, insists that they’ve tweaked the suspension so that the chassis should remain strong under any normal racing circumstances. How they pulled it off, they won’t say. “It is a competition, after all,” Robbins says.

WHAT’S NEXT Winning the race. The first of the series of four Formula Zero races was to begin on August 22 in Rotterdam. After that, the team competes in Spain, the U.S. and the U.K.