If Luxembourg's Motor Development International gets its wish, the next wave of alternative-energy vehicles will be a real bunch of windbags 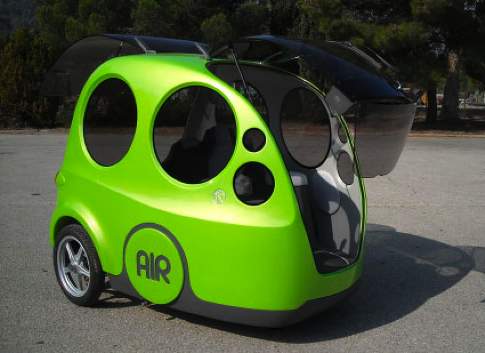 The idea of using compressed air to propel a passenger car has been kicking around tech circles for years. Now, Luxembourg’s Motor Development International SA (MDI) may have the first viable angle to launching a first wave of air cars: airport transportation. Behold the AirPod, a four-wheel, multipassenger minicar set to be built in Nice, France. It’s one of the brainchildren of Guy Nègre, a former aeronautics and Formula One engineer who’s been messing around with compressed-air technology in passenger cars for nearly two decades.

Nègre and company assert the AirPod can hit 43 mph, by way of MDI’s 5.45 hp compressed-air motor with traditional pistons like an internal combustion engine. At 15-20 miles per hour, they say, the AirPod has a range of 130+ miles per tankful. Sporting a body of plastic composite, the AirPod is just 82 inches long, 63 inches wide and 79 inches high, and expected to come in passenger and cargo versions, each weighing under 500 pounds.

Not quite built for the interstates, the AirPod will be the focus of of a joint program with AirFrance/KLM airlines starting next Spring, in which a number of the vehicles will haul passengers between arrival and departure gates in Paris and Amsterdam airports.

The AirPod is just one of several compressed-air vehicle (CAV) prototypes MDI has in development. And the firm is serious about making such air cars a viable alternative energy, er, alternative. Reports earlier this year confirmed the company has sold the rights to build the cars to firms including US-based Zero Pollution Motors and India’s Tata Motors.

Zero Pollution Motors’ ambitious plan calls for production of up to 8,000 compressed-air vehicles a year beginning in 2011, with plants spread out among nearly every US state. That car, larger, more powerful and with a longer range than the AirPod, will cost in range of $20,000. As the largest potential market, California could have as many as 17 air car manufacturing plants, with 12 planned for Florida, eight for New York, four for Georgia, and two for the Connecticut/Rhode Island areas. Indian carmaker Tata has bought the rights to make air cars for the giant Indian market.

One thing air cars’ proponents insist the vehicles are not: vaporware.

[via Yahoo Finance and EV World]