All Sonic, No Boom

Long hampered because the planes were too loud to fly over land, supersonic air travel is now on its way back-without the big bang 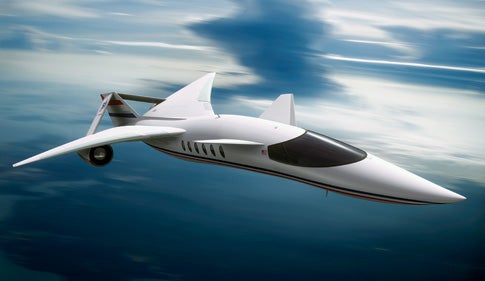 For a closer look at the QSST concept inside and out, launch the photo gallery.

If you´re ever lucky enough to fly a Quiet Supersonic Transport between New York and Los Angeles, you´ll have just enough time to get through a movie-a short one. Instead of the usual six hours, it will be a 1,100mph, two-hour hop. The QSST, as the proposed luxury private jet is known, could be the first civilian supersonic plane approved for overland routes, thanks to aerodynamics designed to muzzle its sonic boom. Lockheed Martin´s Skunk Works has been developing the project for six years under a $25-million contract from Supersonic Aerospace International (SAI), founded by Michael Paulson, son of Gulfstream founder Allen Paulson. The 12-passenger QSST would fly at between 47,000 and 57,000 feet with a range of 4,600 miles (Chicago to Rome, for example), and it doesn´t need an extended runway. Configured with 12 club chairs, a spacious bathroom and a sweet A/V system, the QSST is aimed at diplomats or executives with plenty of money-but little time-to spare.

Designed to fly between Mach 1.6 and 1.8 (1,056 to 1,188 mph), the two-engine gull-wing aircraft would leave a sonic wake that´s only one hundredth the strength of the Mach 2″capable Concorde, the 100-seat speed demon that wound up permanently grounded following a fatal accident in 2000. (High maintenance costs for the aging fleet and a struggling airline industry also contributed to its demise.)

Eliminating bone-rattling sonic booms is a major feat of aerodynamic hocus-pocus. When an aircraft travels faster than the speed of sound, it creates pressure waves in the air that collide with one another faster than they can dissipate, resulting in a loud crack, or sonic boom. The QSST, though it shares its general shape with the Concorde is less than half the size and uses fine-tuned aerodynamics to control the pressure generated as the plane displaces air at supersonic speeds. With air disturbances along the craft evened out, the QSST generates more shockwaves of smaller magnitude rather than two explosive reports. Tom Hartmann, the program manager at Lockheed, expects the boom to be imperceptible-quieter than a kite flying overhead.

Another key to quiet flight is its broad distribution of lift-generating surfaces. The QSST´s canards-the small wings near the front of the fuselage-and swept-V tail provide substantial lift, preventing the sharp, loud-boom-generating pressure change typical of larger, wider wings. Hartmann says the QSST is so sleek that it can fly 10 percent farther on its fuel supply supersonically than it can at subsonic speeds. “We could easily design a low-sonic-boom aircraft if it didn´t have to fly anywhere,” he says-that is, if the design didn’t have to take fuel efficiency into consideration. “The challenge is to fly a long way. The hard part of this was to develop a low-drag design.”

The inverted-V tail also allows the two engines to be mounted far aft-
a design feature that further separates the pressure waves and keeps them from crashing into one another. Normally, this engine placement would require extra material to support the cantilevered weight, but the inherent strength of the V tail’s truss shape compensates.

The Federal Aviation Administration restricted the Concorde to transoceanic flights because that craft created sonic booms strong enough to rattle dishes on the ground below. Paulson says the QSST will meet the FAA´s stringent new noise regulations, which took effect at the beginning of 2006, and he´s hopeful that the quiet design will prompt a lifting of the ban on overland supersonic flights.

SAI is evaluating engine designs from General Electric, Pratt & Whitney and Rolls-Royce for a unit that produces 33,000 pounds of thrust (on par with a midsize airliner), for 66,000 pounds of total thrust from two engines. Paulson plans to settle on a design in the next year, assemble an international consortium to manufacture the jet, and put it on the market by 2014 for about $80 million. He´d like to roll out a fleet of 300 to 400 in the next 20 years. “The Concorde was a magnificent aircraft,” Paulson says, “but basically, it was 1960s technology. This is an idea whose time is overdue.”

Eric Hagerman is working on a book about exercise and the brain for Little, Brown. 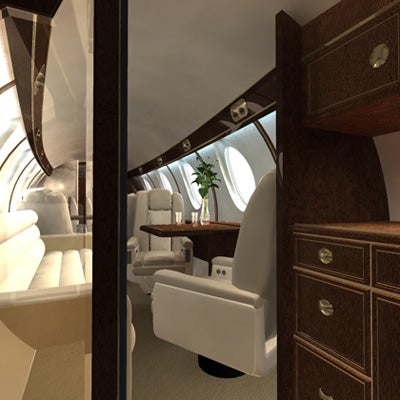 Configured with 12 club chairs, a deluxe bathroom and a fully-wired A/V system, the QSST is aimed at diplomats or executives with plenty of money-but no time-to spare. 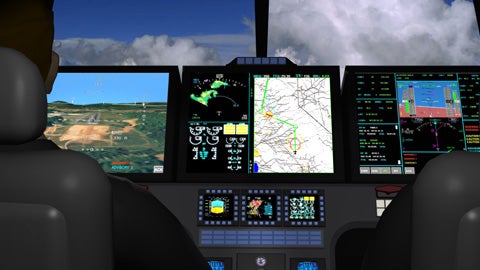 QSST will take advantage of the latest digital avionics and display screens. 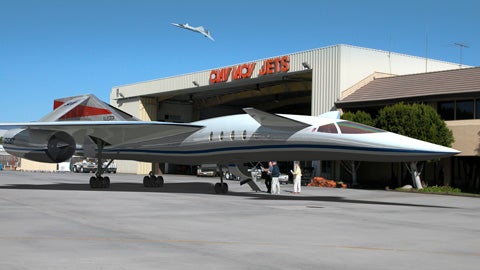 Form will definitely follow function with the QSST, creating a striking shape for the ultra-fast cruiser. 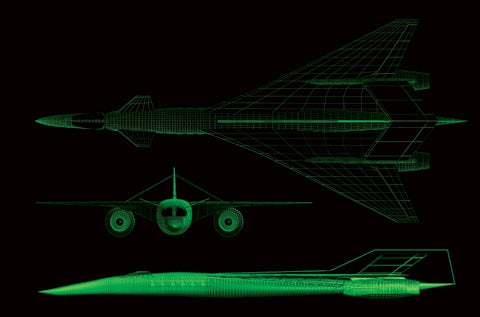 The QSST’s swept wings, forward canards and tail all generate lift, eliminating the need for a larger main wing that would produce sharper pressure spikes 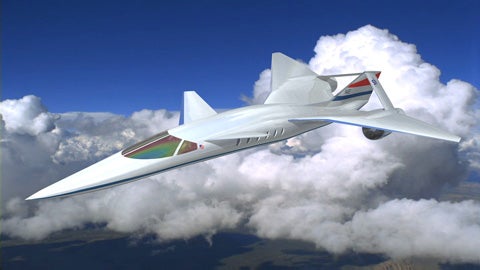 Careful aerodynamic shaping stretches the pressure wave that causes sonic booms along the length of the aircraft, effectively converting the loud double bang into a more muffled poof. 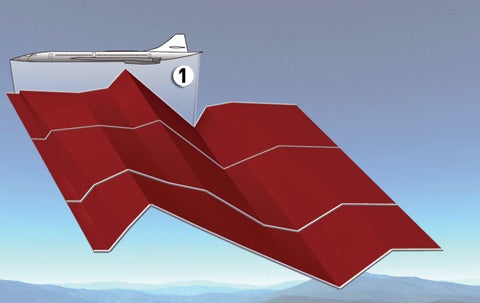 Sonic booms happen when pressure builds up too fast around wings and engines. In a conventional boom, the pressure migrates forward and backward. That movement generates two pressure spikes at the front and rear, creating a classic N-shaped-wave [1], and the result is a loud double bang. 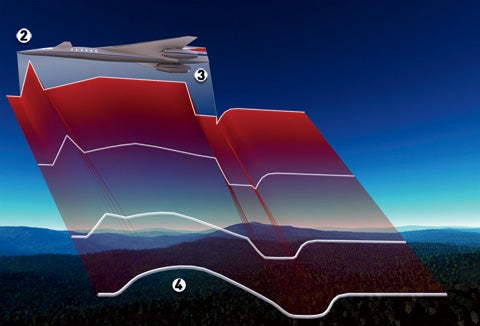 To soften the boom, QSST aerodynamicists sought to spread out the pressure points along the fuselage. The new aircraft [above] generates only moderate shocks at the nose [2] and tail [3] with no spike in the middle. The stretched nose creates a small but distinct pressure spike at the front, as does the rear engine placement. These two small spikes counter the tendency of the wave to travel forward and backward. By the time the sound reaches the ground [4], the N-wave has diffused into a barely audible poof.