A wireless network allows electronically enhanced bugs to chirp, tweet, and blog (some day!) about weapons they find 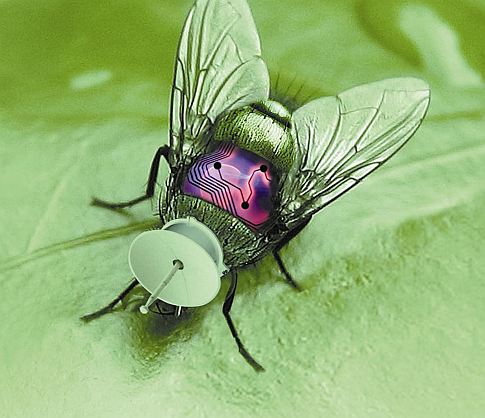 In its attempts to quash weapons of mass destruction, the Pentagon has been trying novel ways to track down dangerous materiel. For years, DARPA has been trying to train insects and bugs to sniff out toxic substances, providing more sensitive detection, as well as access that conventional sensors might not have. The newest twist on this concept is a plan to link up armies of the cyborg bugs in a peer-to-peer, or insect-to-insect, network that will allow them to communicate with each other and with their human masters.

Previous research into this field of detection included landmine-sniffing honeybees and mechanized remote-controlled insects. This next approach will implant insects with a chip that reads certain muscle twitches, which correspond to the presence of certain chemicals. The chips will then modify the chirps of insects like cicadas or crickets into an electronic signal that could be transmitted to other chipped insects in the area. Information about detected weaponized chemicals could bounce around this mobile insect network, and then be picked up by humans.

While the idea seems pretty far-fetched, the idea of creating a decentralized communication network between free-roaming insects could radically increase the bugs’ range of detection. Still unclear, however, is if this insect Wi-Fi will allow the information-laden chirps to be more than 140 characters long.