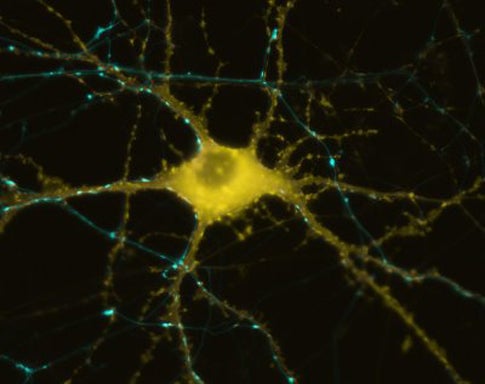 Like a line worker at a GM plant, this nerve may soon face a robotic replacement.
SHARE

While Dean Kamen spends his time creating bionic replacement arms, a team of Swedish scientists have begun developing a robotic prosthesis for a far more complex organ: the brain.

Writing in this week’s Nature Materials, the team announced that they had created the first device that communicates with nerves in their own language of neurotransmitter chemicals, rather than electrical impulses.

Previous neuroprothesis worked through electric signals that triggered already existing nerves to release neurotransmitters like dopamine. However, the electric signals didn’t discriminate between different types of nerve cells, which greatly reduced the fidelity and usefulness of the devices.

This new device utilizes the same neurotransmitters that natural nerves use. That allows the robotic nerve to target specific neural pathways, without the random side effects of electronic neural stimulation.

The technology is still in its infancy, but contains the potential for a radical shift in brain/electronics interfaces.

In the short term, this technology could help people who suffer from diseases like schizophrenia, by releasing the neurotransmitters needed to regulate the out-of-control nerve firings associated with those diseases.

In the long term, as the the technology becomes smaller, cheaper, and able to receive neurotransmitter signals as well as send them, these artificial nerves could be used to create bionic brain prostheses for stroke victims, or even serve as the intermediate between our biological brains and electronic computers.