A House That Walks 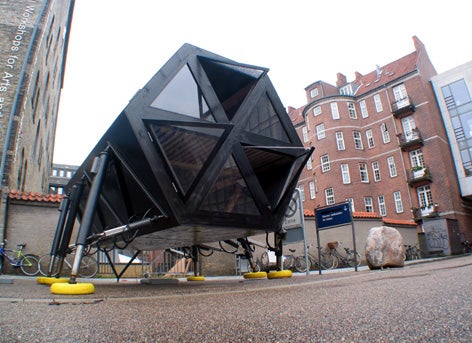 Houses are normally fairly stationary objects, and that’s not considered a bad thing. But innovation never stands still, and a new prototype house that can walk on six legs has been built . The house is ten feet high, powered by solar panels, and is outfitted with a kitchen, toilet, bed, and wood stove. Last week, the house, a collaboration between MIT and the Danish design collective N55, took a journey through Cambridgeshire in England as part of an art project at the Wysing Art Center. Designed to move at the muscle speed of a human, the house walked at about five kilometers an hour around the 11-acre campus. (See video)

Samuel Kronick, an MIT student, designed the legs and wrote the software so that the house can move.

“Leg systems require a software algorithm to calculate the position of each articulated element based on the desired location of the foot,” says Kronick. “This process is called inverse kinematics (IK). IK algorithms are fairly well-developed for rotary joint systems, like servo-based hexapod walkers, but since we came up with the tetrahedral legs, I had to write my own IK system.”

The six legs provide high stability even over unpredictable terrain. And, with high motor function, the house can turn left and right, move forward and back, and even change height as needed. Kronick says the walking house is a first of its kind, although there have been Russian folktales that describe walking houses. N55 says the walking house is meant to be an ecological concept that is not harmful to the environment and inspires nomadic excursions.

Kronick says he would love to test the walking house in Africa with a herd of elephants, and has ideas about an amphibious version that can float on water as well as walk on land.

“We plan to make the house walk well and reliably enough that you could program a set of GPS waypoints via the onboard computer, remotely from an iPhone or over the internet through a Google Maps interface or similar, and have the house follow that path,” he says.