This Drone Has Arms

To help with unusual deliveries (not snatching babies) 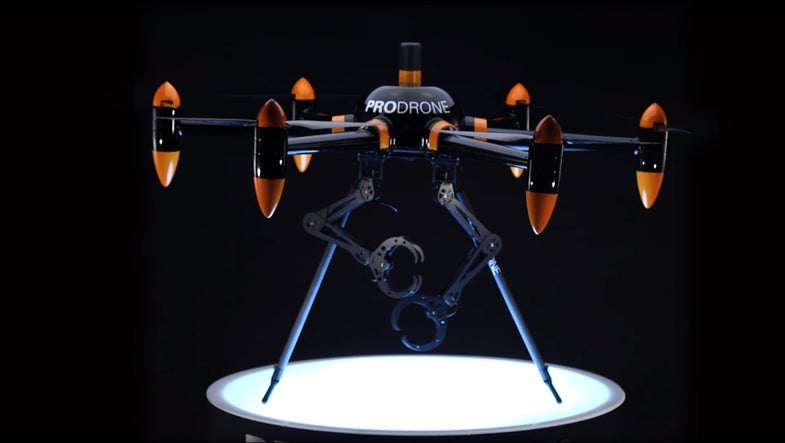 But Japanese company Prodrone Co, LTD, likely means it literally. Check out these grabby robotic arms the company included on its latest drone, the PD6B-AW-ARM.

And while Prodrone eagerly trumpets the 5-axis robotic arms as being capable of a laundry list of tasks (“to attach or join things; to cut cables; to turn dials; to flick switches; to drop lifesaving buoys; to retrieve hazardous materials, etc”), it has yet to list a price for its new flier.

The PD6B-AW-ARM was built on top of the older PD6B-AW drone body, which may help explain the awkward name. The base model is a hexarotor drone (that’s six rotors) that Prodrone says can carry up to 44 pounds of payload on its 40 pound body.

The “ARM” version can only carry 22 pounds of cargo, which means the arms themselves must weight 22 pounds altogether. Still, that’s plenty of heft for moving a shiny metallic lawnchair around an empty castle estate, as you’ll see here.

Prodrone says the arm drone can fly for up to half an hour, though that likely decreases depending on the weight of whatever its carrying.

I wouldn’t expect armed drones to take off as a standard way for robots to carry objects. But it could offer some niche uses, like dropping life preservers, moving chairs, or snatching infants and delivering them to wicked witches like so many flying monkeys. Cyberpunk Wizard of Oz remake, anyone?