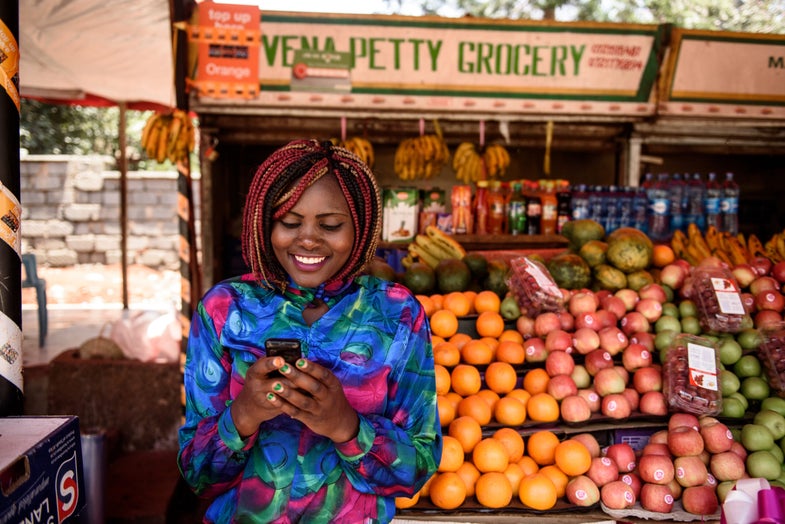 Being able to send and receive money by cell phone has helped lift 194,000 households in Kenya out of poverty, according to a study published Thursday in the journal Science. Women especially have benefitted from the spread of mobile money, which has helped many move from farming into business, economists say.

With mobile money, people can transfer funds back and forth over text. By the end of last year, these services had reached 93 countries; in Kenya, they are now used by 96 percent of households. Kenya’s dominant mobile money service, M-PESA (“M” stands for mobile, and “pesa” is Swahili for money), launched in 2007.

There are only 2,700 ATMs in Kenya, but 96 percent of households use a cell phone. M-PESA is appealing, particularly in rural areas, because you don’t need a bank account or internet connection to use it.

Kenya now hosts more than 110,000 mobile money agents—people who can help users deposit cash into their accounts or pick up payments others have sent them. “You can think of them as simply human ATMs,” says coauthor William Jack, a professor of economics at Georgetown University.

The service is cheap (although not free), and can be used to purchase goods or send money to friends and family. “It’s not integrated with another financial product like a credit card,” Jack says. “There’s only one institution involved, the cell phone company.”

Mobile money is also useful because many families in Kenya are dispersed across the country. “There will be a brother or son who works in Nairobi and sends money home to his mom, there’ll be a husband who works in Mombasa an sends money up country for school fees,” Jack says.

Before the rise of mobile money, it was time-consuming and costly for these families to share funds. “There was no easy way to do that electronically; people would literally take two or three days off work and catch a bus 1,000 kilometers to deliver 30 or 40 dollars and then come back,” Jack says. “Mobile money allowed that process to happen literally at the press of a button, and at relatively low costs.”

To find out how these services have helped people over time, Jack and his colleague, Tavneet Suri of MIT, surveyed households around the country between 2008 and 2014. The team examined how financial wellbeing changed as mobile money agents became more plentiful in certain areas.

“It’s kind of like saying, if you can get better access to an agent, how is your life different?” Jack says. “On average, they’re a bit richer.”

Jack and Suri estimate that access to mobile money has helped bring 2 percent of Kenya’s households out of poverty, with the most marked benefits seen in families headed by women. They believe that access to M-PESA has helped 185,000 women save more and start businesses.

Mobile money is also beginning to offer more sophisticated financial services like M-Shwari, a bank account that people can operate through M-PESA. “It has been integrated with a couple banks to provide a credit service and a savings service,” Jack says. “People have talked about insurance being provided over the phone.”

Being able to use mobile money hasn’t made people rich. “It’s not clear how far above the poverty line they went,” Jack says. But fewer homes are surviving on less than $2 a day.

M-PESA gives people a way to safely store and manage money, and this directly improves their financial wellbeing, he and Suri concluded.