Watch The Trailer For A Movie Filmed Entirely By Drones 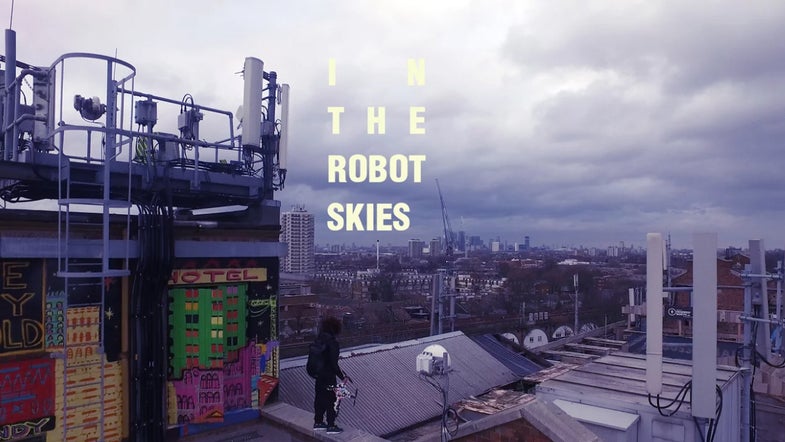 Most drones are just cameras that fly. Cheaper and easier to use than helicopters, drones can add aerial photography and overhead shots at low cost to films, where they form part of the director’s toolset. Liam Young, a speculative architect based in the United kingdom, teamd up with writer Tim Maughan to create a film shot entirely by autonomous drone cameras.

That film, In the Robot Skies, will premiere at the London Film Festival on October 8. The trailer was released online last night, and we can already discern some of the features of the world. There’s aerial surveillance, and hulking security drones. The machines identify and label people, and behaviors, recording anti-social actions and confining the anti-social to their homes.

And there are other drones, flown by the confined as a way past the robotic sentries.

Here’s how the creators describe the film:

This is hardly Liam Young’s first foray into new media as a way to explain future cities. In 2012, he collaborated with authors and artists to imagine a future city in “Under Tomorrows Skies” (no apostrophe). In 2014, Liam Young created a virtual City of Drones, soundtracked by John Cale, where viewers see through the eyes of a flying robot as it navigates an endless world of aerial machines and skyscrapers.

In the Robot Skies feels like a continuation of this work, an exploration of human-built space by human-built machines. Watch the trailer for it below.