This is what happens inside a battery right before it explodes 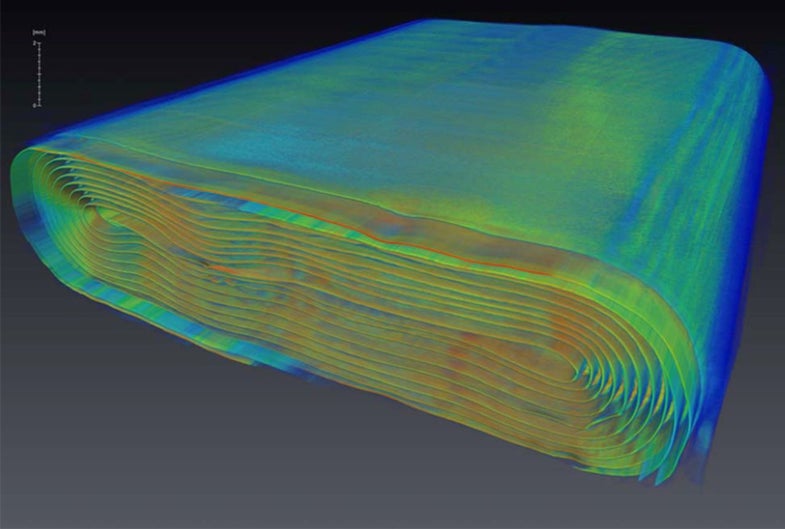 From the fiery Note 7 debacles to exploding hoverboards, lithium-ion batteries aren’t doing so hot lately. A new study helps to explain how these popular power sources can turn into safety hazards.

In the paper, published in the Journal of the Electrochemical Society, scientists at the Canadian Light Source (CLS) synchrotron looked inside an overworked battery. In this case, they drained a battery until its voltage was below a critical level.

When we overcharge or overheat lithium ion batteries, the materials inside start to break down and produce bubbles of oxygen, carbon dioxide, and other gases. Pressure builds up, and the hot battery swells from a rectangle into a pillow shape. Sometimes the phone involved will operate afterwards. Other times it will die. And occasionally—kapow!

To see what’s happening inside the battery when it swells, the CLS team used an x-ray technique called computed tomography.

Inside the battery is an electrode that spirals out from a central point like a jellyroll. The x-ray scan revealed that the bubbles produced during overheating warped and dented this electrode.

Intriguingly, the study authors found that the worst deformation from the gas buildup occurred in areas that had slight defects before the battery was ever over-drained. The authors note that doing more studies like this, on a larger variety of batteries, would improve understanding of how these batteries respond to gas evolution, which could lead to better designs.

As New Scientist notes, it’s not clear whether the Samsung Note 7 catastrophes included pillowing or this type of deformation.

[Journal of the Electrochemical Society via New Scientist]