Watch A UPS Drone Deliver Medical Supplies To An Island

The shipping giant plays catch-up in the unmanned delivery game 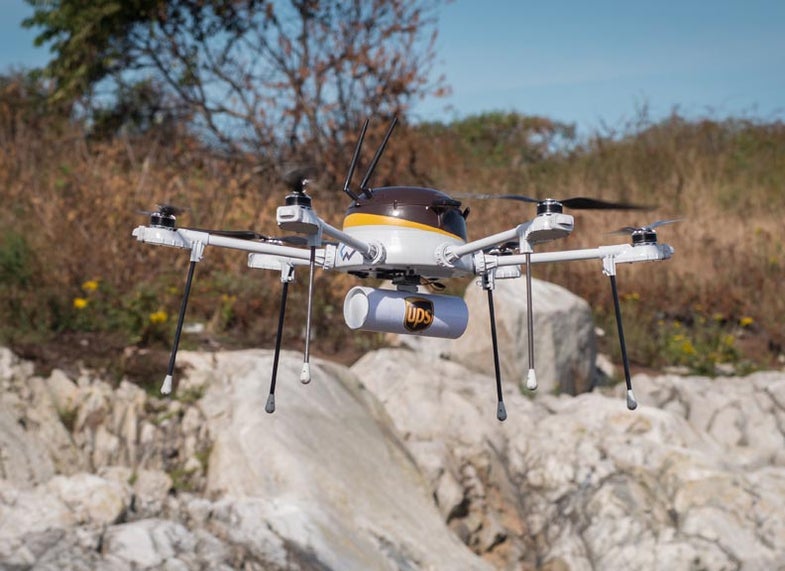 UPS has over 100,000 cars, vans, tractors, and motorcycles in its delivery fleet, and over 500 jets owned or chartered. That’s a massive fleet by any metric, and one with a tremendous amount of reach for the delivery giant. Yet it’s a fleet with one major limitation: the jets need large runways to land, and the automobiles are all limited by land. This is fine for people on the mainland, but what if UPS wants to deliver something to a small island, one without the space for a runway or ferry? Drones. Drones are the obvious answer.

On Friday, UPS announced a partnership with Massachusetts-based dronemaker CyPhy Works. From UPS:

There are no roads or bridges that reach Children’s Island, so the flying drone is an attractive option for a just-in-time delivery. The island currently hosts a YMCA day camp, and in the mock scenario, the drone delivered an asthma inhaler. It’s a modest delivery, but the kind that could fit into UPS’s larger picture: an ability to get those last couple of miles where cars can’t go.

UPS, despite its decades of delivery experience, is a latecomer to the drone delivery game. Drone startup Flirtey demonstrated a ship-to-shore drone delivery of medical supplies off the coast of New Jersey earlier this summer, and drone delivery company Zipline declared its intent to delivery needed blood to rural populations in Washington State’s San Juan islands.

And it’s not just startups that are already doing delivery. Amazon’s drone program is perhaps the most famous, but Europe’s own DHL delivery giant experimented with drones in difficult mountain terrain. Chinese online retailer JD.com is also exploring drone delivery in marshy and channel-crossed provinces, where flying drones can fly easily over the car-impassible waterways. That UPS is experimenting with drone technology is more a testament to the technology’s broad appeal than any particular innovation by the company itself.

If UPS moves beyond just experimenting with drones, it may find the unmanned flying machines helpful in day-to-day deliveries. Perhaps the future of the UPS fleet is even delivery vans with drones mounted on top.

Watch the delivery below: