Potentially harmful chemicals are in everything from car seats to nail polish. 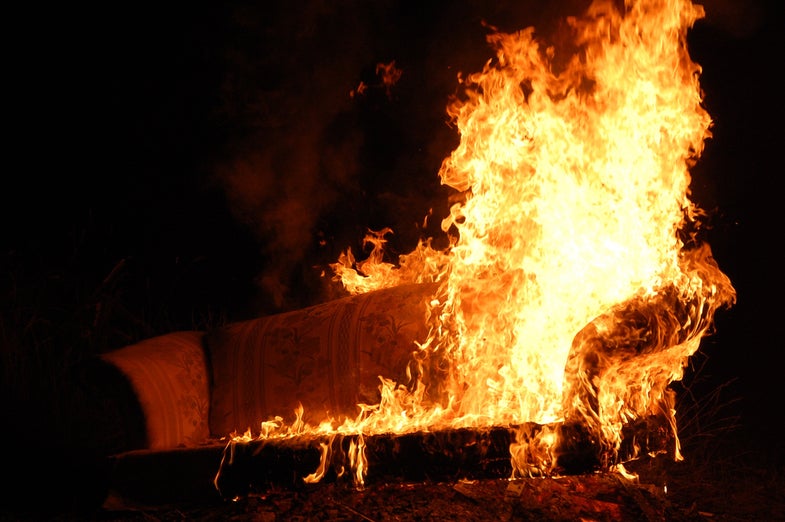 Making things fire retardant seems like a no-brainer. Less fire is better than more fire in a person’s home. For decades, manufacturers responded to customers’ desire to buy things that don’t catch fire easily by putting chemicals in their products to prevent them from going up in flames. But how badly do we, as a society, want things to not be on fire? Is it worth risking our fertility? And how good are we at retarding fires anyway?

It turns out that humans are only alright at retarding fires, but we’re fantastic at putting retardants in things that then leach into our bodies. One of those things is yoga mats, though that’s just the one that headlines jumped on. Others include a wide array of products for babies. You know—the mini humans who put their mouths on everything. Back in the ’70s manufacturers stopped putting a particular flame retardant chemical in children’s pajamas because it was considered a safety hazard, but the substance continues to be added to crib mattresses, strollers, and car seats. Flame retardants can escape from everyday household objects—like sofas—into the air, either as vapor or as tiny airborne particles. These can land on anything, including food, so we’re essentially ingesting these chemicals on a regular basis.

Study after study has found that nearly every American has detectable levels of various flame retardants in their bodies. Many have shown that some of these chemicals can have undesirable health effects, especially on the reproductive system. Now, a new study in Environmental Health Perspectives suggests that high levels of flame retardants might be causing fertility problems in women.

This is just an association…but it’s still pretty compelling

First: a word of caution about this study. Although the concentrations of flame retardants was comparable to the general population, this was only a couple hundred women living in and around Boston. That’s not necessarily a representative sample. They were also all recruited from an in vitro fertilization clinic, which means they were already having some fertility issues. And though there’s separate evidence of how flame retardants might affect reproductive systems, this particular study didn’t suggest a mechanism by which those chemicals would harm women or fetuses. This is a correlational study, not a causational one.

All that being said, this study just adds to the growing body of evidence that flame retardants aren’t good for us. Previous studies have suggested that these chemicals might be acting on the thyroid, which is a gland in your neck that helps produce and regulate hormones. Problems with the thyroid generally hurt your reproductive system, since it relies on a balance of hormones to work properly. Men who have high levels of some flame retardants tend to have lower sperm counts, and this new study seems to suggest that the higher women’s exposure, the worse their fertility health was in general. Those women tended to have fewer live births even though their exposure levels were on par with the average levels found in the population. Everyone is exposed at some point, and since these chemicals are fat-soluble, they tend to accumulate in the body. Women who get exposed can later pass the chemicals on to their children through breast milk.

There still hasn’t been enough research about the specific effects that flame retardants have on health. It’s clear that they’re not good for us, but we don’t really understand how bad they might be. We mostly just know that they’re freaking everywhere. Some of the yoga mat headlines may have you thinking that buying an organic, non-fire-retardant mat will solve the problem. It won’t. You cannot escape the exposure. You can try to limit it, but even that will be challenging. Flame retardants are so ubiquitous because safety standards all over the world require lots of furniture, clothing, building materials, and electronics to be flame retardant. The easiest way for companies to do that is often to add a flame retardant chemical, so they do. From there, you can absorb the compounds through the food you eat and the air you breathe. There are even flame retardants in household dust.

And yes, fire retardants probably do help overall. They give people a bit of extra time to escape from burning buildings and prevent small fires from becoming massive ones. But there’s also evidence that they might not work as well as we hope, especially when we consider the potential downsides. In 2010, a group of 145 scientists from 22 countries published a statement about their concerns that flame retardants weren’t worth the health risks they posed.

Unfortunately, there’s not much easy advice here. Even if a consumer is aware of chemicals in the products you buy, they’ll be hard-pressed to avoid all fire retardants. It’s in nail polish, PVC, cars, upholstery, camping gear—it’s surrounding you a lot of the time. But if you are concerned, you could focus your efforts on limiting exposure in populations that just can’t help themselves. Babies love putting their mouths on things, and won’t respond well to explanations about the potential dangers of organophosphate flame retardants. So it’s probably worth the effort to look into limiting their exposure by finding car seats and crib mattresses without flame retardant chemicals. It won’t be a cure-all—eliminating exposure is all but impossible. All you can really do is minimize it.