What to know about polio boosters, oral vaccines, and your medical history records

The polio vaccine you got as a kid should still be working. 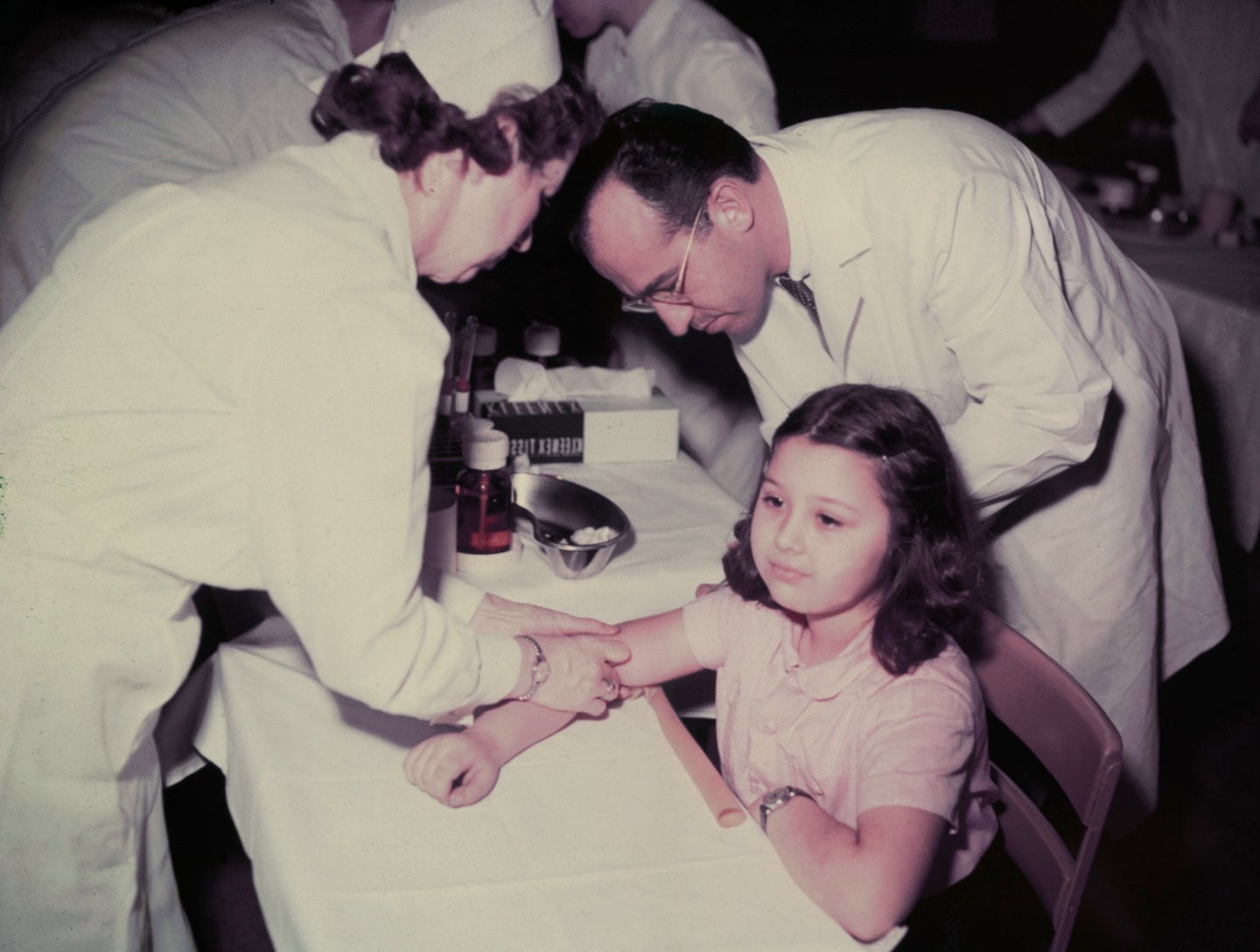 At right, Jonas Salk, the doctor behind the first polio vaccine, administers a shot to a kid in Pennsylvania in 1955. Bettmann/Getty Images
SHARE

With COVID, monkeypox, and West Nile virus, New York has had an onslaught of outbreaks this summer, and it doesn’t seem to be slowing down. Polio is spreading in the Empire State, with the first case in decades reported in Rockland County, followed by traces of the virus in New York City wastewater weeks later. Adding to concerns of a potential outbreak is an August 16 report by the Centers for Disease Control and Prevention (CDC) confirming the virus had actually been circulating in the area since April.

The past few years have been nothing short of public health emergencies, but given the new threat of a virus thought to be under control, you might be asking: Will the US see a new polio outbreak?

According to medical experts, people should be vigilant enough to follow the news, but not concerned enough about it becoming another pandemic. “It’s a disease that’s been considered eradicated for the most part,” says Zachary Hoy, a doctor at Pediatrix Nashville Pediatric Infectious Disease. “With most people vaccinated and low circulating numbers, [you] should not be too worried.”

While there’s only been one case of polio so far, viral traces in wastewater suggests there could be hundreds more unconfirmed cases. Your concerns about a potential polio outbreak are valid. Polio is dangerous. Fortunately, this isn’t the country’s first run-in with the virus, and infectious disease doctors have the answers you need to protect you and your loved ones.

How good is the polio vaccine?

You might have heard that the paralytic polio case occurred in an unvaccinated individual exposed to a polio strain used in oral polio vaccines. The oral polio vaccine, which is still the go-to in some countries, uses three weakened strains of the virus to stimulate the immune system and build antibodies against it. Spearman says this type of vaccine is typically safe, but there is a very small risk—one in every two to three million doses—for the weakened virus to shed and develop mutations. If it gets a certain number of mutations, the immunized person or an unvaccinated person exposed to that mutated virus can end up with paralytic poliomyelitis. Of the ten billion doses of the oral drops, there have been less than 800 cases of vaccine-derived poliovirus in the past decade.

The inactivated polio vaccine is the only shot used in the US since 2000 and is considered extremely safe and effective. “It’s greater than 99 percent effective in protecting individuals against any disease from poliovirus,” says Paul Spearman, director of the division of infectious diseases at Cincinnati Children’s Hospital Medical Center. “Compared to the COVID vaccine, waning immunity is not much of an issue with the polio vaccines,” Hoy explains further.

[Related: During a devastating polio epidemic, a vaccine was finally on the horizon]

The vaccine is also very effective among children, especially those under 5, who are the most at risk for paralysis and death. Two doses of the inactivated polio vaccine are 90 percent effective or more against paralytic polio, while three doses increase protection to 99 to 100 percent. The World Health Organization warns it takes only one infected child to make other children at risk for polio, making it a mandatory vaccine in all 50 US states for students.

Spearman explains that the vaccines helped to nearly eradicate polio in the US in 1979. Since then, the rare cases that pop up are usually from someone who has traveled out of the country where the virus is still endemic. However, those instances are so well controlled with the current vaccines that they never have erupted into a large-scale outbreak.

I got the oral polio vaccine as a kid. Will I need a booster?

Short answer: no. According to the CDC, the oral polio vaccine was discontinued because of the small risk of vaccine-derived poliovirus. But that does not mean it stops working. “The oral polio vaccines are effective and very immunogenic,” says Spearman.

Also known as the Sabin vaccine, the oral drops were one of the reasons why the polio epidemic ended in the US. “There were tens of thousands of polio cases yearly in the US in the 1940s and ‘50s,” explains Spearman. “Then the Salk vaccine and Sabin vaccine, which is the oral polio vaccine, came out and cases fell dramatically.”

“People that have taken the oral polio vaccine versus the inactivated would still have appropriate immunity,” adds Hoy. “So it would not be recommended that they would have to get a polio booster.” At the time of publication, the CDC has not released any recommendation that individuals who received either vaccine series will need an extra dose of the inactivated vaccine.

Will I ever need a polio booster in the future?

Both infectious disease experts say it’s unlikely, given that the polio vaccines are highly effective in protecting against infection and curbing viral spread. But there are some exceptions.

The CDC says people who are at increased risk of being exposed to the poliovirus, such as healthcare workers, and have already completed their shot series are eligible for a one lifetime booster of the inactivated polio vaccine.

[Related: Everything you should know about getting a second COVID booster]

Spearman mentions that doctors may also consider giving a booster on a case-by-case basis, with the highest priority going to people traveling to certain countries in Asia and Africa with known wild-type poliovirus circulating in the area. Another thing to consider is if an individual is immunocompromised and has a risk of contact with poliovirus. While the CDC is not offering additional boosters to this population, they may be more susceptible to infection by the virus and could also harbor it for longer periods of time, warns Spearman.

“The most important thing is if you have a good record of being fully vaccinated as a child, then you’re safe,” adds Spearman. “And you don’t have to worry at this point about getting any boosters.”

Can I get vaccinated for polio as an adult?

For people who know they are unvaccinated, it is possible to catch up as an adult. However, because the immunization is a three-shot series, you won’t be fully protected immediately. After the first dose, your second is scheduled one to two months later. Then your third dose is six to 12 months after the second dose. Given that “it’s not a routine adult vaccine,” Hoy advises calling ahead to ensure your family doctor carries the dose. If not, he recommends going to:

For those unsure about their vaccine status, there are a few ways to confirm old medical records:

If you can’t find your records, Hoy says your doctor may be able to draw your blood and send it to a lab to check for polio titers. If the sample tests positive, you were probably vaccinated.

Are there other ways to protect myself from polio?

Both infectious disease experts agree vaccination is the best way to protect yourself from polio. But Hoy also says that it’s useful to know how the virus gets into people’s bodies. The poliovirus is spread through the fecal-oral route and lives in the host’s throat and intestines. Having a bit of stool on your hands from contaminated foods, water, or surfaces can make its way to the respiratory tract if you touch your mouth. Some recommendations include:

“But if someone is unvaccinated, I wouldn’t just practice good hygiene,” Spearman says. “I would certainly get vaccinated.