“The future of warfare is a future of autonomous, unmanned, and robotic systems.” 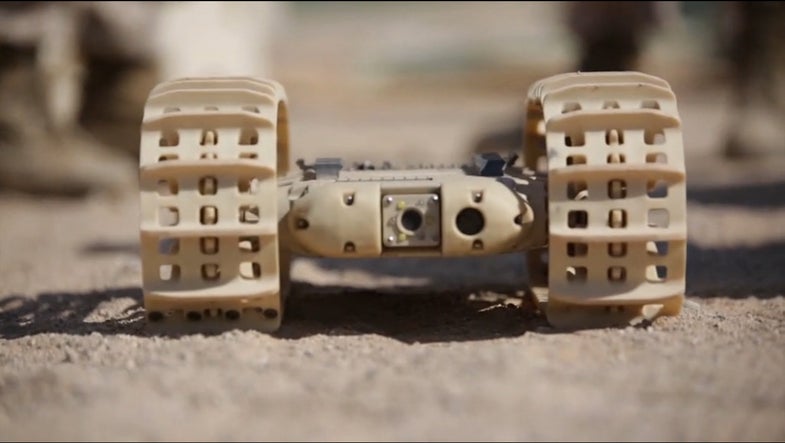 Yesterday marked 15 years to the day since the United States formally entered into a War on Terror, and after 15 long years of war, it’s not hard to imagine that there must be a better way. For the United States Marine Corps, which is focused narrowly on the work of fighting America’s wars, that innovation can’t come soon enough. General Robert B. Neller, the Commandant of the Marine Corps, is launching an innovation challenge today, specifically asking Marines to figure out what aspect of their jobs could be better done by robots.

Or scouting ahead from the sky.

The challenge specifically asks Marines to:

And, borrowing the “dull, dirty, or dangerous” language directly from the AUVSI, a drone lobby and industrial association, the examples of Marine Corps tasks that robots could do are dull, like filling sandbags, dirty, like going into areas of chemical or biological weapons to sense for chemicals, or dangerous, like sweeping for mines/IEDs.

The corps already experimented with robotic innovations: the LS3, or legged support system, is a robot mule that can carry 400 pounds, lightening the loads on the people doing the fighting. That robot, however, was also really loud, so the Corps rejected it as a liability in battle. The United States Army, too, is interested in adding robots to their ranks, and is even testing them in a wargame in the Pacific. One General predicts that robots will replace one-fourth of U.S. combat soldiers by 2030.

At the end of the video announcing the Innovation Challenge, the narrator declares, “The future of warfare is a future of autonomous, unmanned, and robotic systems.” This doesn’t necessarily mean robots doing the actual fighting and killing, a conclusion largely but not entirely rejected by a Pentagon study published this summer. What’s more likely is that robots will do everything except the killing, as they carry weapons and tools for humans into battle, and maybe even carry them away when they’re wounded.