Marines Are Testing A Robot Dog For War 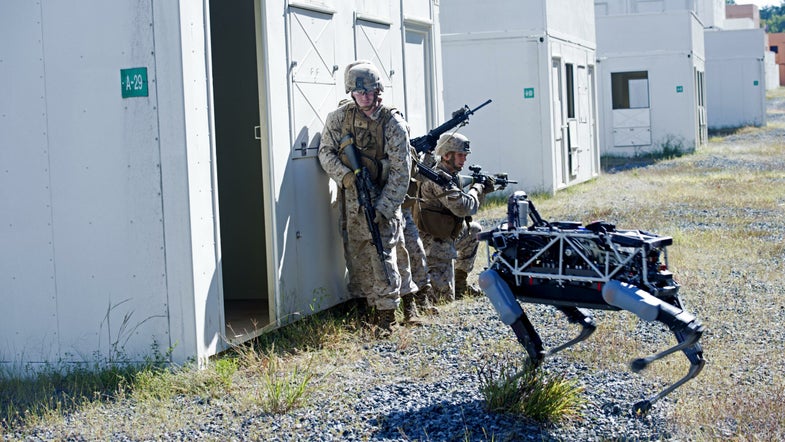 Robots can’t die–at least, not in the tragic, irrevocable human sense–so having a robot accompany soldiers gives them at the bare minimum an expendable scout. Spot, the little brother to Alphabet-owned Boston Dynamic’s iconic BigDog robot, is now training with the Marine Corps in Quantico, preparing for a future where robots fight alongside American troops at war.

Spot isn’t the first of BigDog’s siblings to train with the Marines. LS3, a heavier, sturdy robot designed as a mechanical mule that can carry up to 400 pounds of gear for a squad on the move, participated in exercises with Marines last year. While LS3 replaces mules, Spot is an alternative to military dogs, poking ahead of troops into houses or around corners. The 160-pound robot is battery-powered and remotely controlled, with the operator as far as 1,600 feet away. It sees through a spinning camera mounted where its head should be, and, after scanning a room, it can crouch down to get out of the way of troops storming in.

Spot may not be the final form of the robot dog the Marines take to war, but by training with a robot now, they’re learning what they need from a robot, and robot makers are figuring out how better to match their machines to the Marines. When that day finally comes, the human devil dogs may march into battle alongside mechanical brethren.

Watch a short video about the tests below: