How To Build A Home Fusion Reactor

The tale of a teen physics prodigy 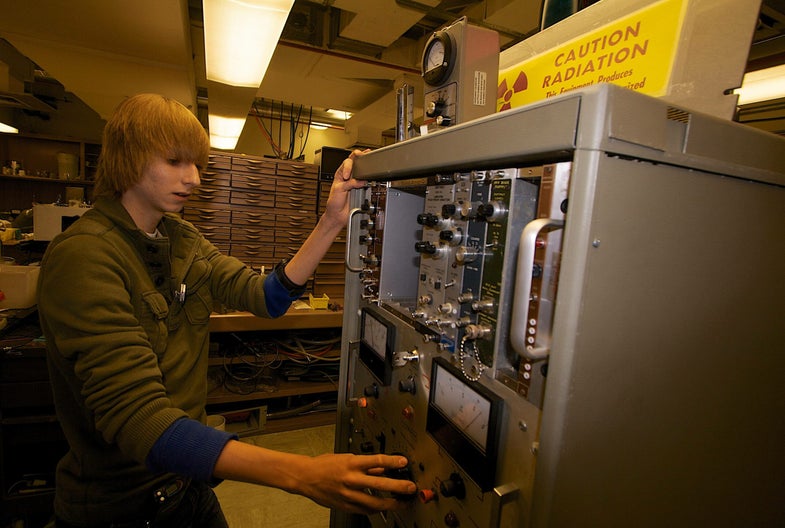 The Boy Who Played With Fusion had its beginnings in 2010 when, as a contributing editor at PopSci, I discovered a small and unusual community of makers, high-energy hobbyists who were taking on both the formidable theory and the precision engineering of applied nuclear science. The idea that self-taught amateurs outside the Big Science world of billion-dollar laboratories were tinkering with nukes—fusing atomic nuclei, transmuting elements, constructing atom-smashing machines in DIY laboratories—was both intriguing and unsettling. As members of this guarded clique began to open up to me, one of them mentioned Taylor Wilson, a fourteen-year-old boy from Texarkana who had just become one of only thirty-two individuals on the planet to build a working nuclear fusion reactor, a miniature sun on Earth.

Now, the article I wrote then about Taylor has blossomed into a book. The Boy Who Played with Fusion is a science adventure, a story of audacity, perseverance, and passion—and a boy whose world seems to have no limits. This excerpt, from Chapter 16: The Lucky Donkey Theory, recounts the first attempts of amateur high-energy scientists to achieve nuclear fusion.

In a way, the amateur nuclear fusion movement began at the intersection of science and science fiction. In the mid-1990s, an electrical engineer and aspiring science-fiction writer named Tom Ligon heard that the physicist Robert Bussard was living and working just two miles from his Virginia home.

“Some people still think Bussard is a fictional character,” Ligon says, “but it turns out that he was quite real.” In the mid-1950s, Bussard worked at Los Alamos in the Nuclear Propulsion Division, designing nuclear rocket engines. He coauthored two books on nuclear-powered flight and in 1960 proposed the “interstellar ramjet,” which would scoop up interstellar ionized hydrogen and funnel it into a nuclear fusion reactor whose output would propel a spaceship forward. Though Bussard thought his design was at least two hundred years from feasibility, the interstellar ramjet (also called the Bussard ramjet) became a fixture in science fiction, used to propel space travelers in Larry Niven’s and Poul Anderson’s novels and the Starfleet starships in the Star Trek universe.

Bussard went on to become assistant director at the Controlled Thermonuclear Reactions Division of what was then the U.S. Atomic Energy Commission. The division had settled on magnetic confinement as its mainline fusion program, but Bussard saw more promise in a fusion reactor he called a polywell (a combination of polyhedron and potential well ), which overcame some of the inefficiencies of the Farnsworth-Hirsch fusion reactor, which is often called a fusor. Fusors use an electric field to accelerate ions toward collisions so forceful that their nuclei fuse, releasing a burst of energy.

Ligon dropped by with his résumé. “Nobody was there,” Ligon remembers, “but the sign . . . declared that it was the Energy/Matter Conversion Corporation. I slipped my propaganda under the door, smiling as I got the connection to Einstein’s famous formula.”

Bussard called him back, and Ligon went to work for EMC2, which built several polywell prototypes between 1994 and 2006. With the final prototype, Bussard felt that he’d solved the remaining major physics problems and he reported exponential efficiency improvements. But as the Iraq War consumed the military’s resources, the military defunded polywell research. Bussard raised private capital to build a polywell power plant.

Bussard passed away in 2007. “He was convinced when he died,” says Ligon, “that he had achieved a significant breakthrough.” U.S. Navy researchers may have been similarly convinced, since they restarted the polywell program after Bussard’s death and brought it to Los Alamos. Taylor and his friend and fellow fusioneer Carl Willis are among the few outsiders who’ve seen the next-generation polywell machine; since their visit to the laboratory, the project has been classified.

In 1998, Ligon built an almost-functional Farnsworth-Hirsch reactor and brought it to a meeting of amateur high-energy scientists at Richard Hull’s home near Richmond. “While I was standing in awe of Richard’s mighty Tesla coil,” Ligon says, “the others were falling madly in love with the idea of building their own tabletop hot fusion reactors.”

“Where people usually fall short is in their neutron-detection methods.”

The next year, Hull’s fusor became the first outside a research laboratory to achieve a verified nuclear fusion reaction. Others in the community followed, and founded an online forum to share resources with people like Willis, who in 2003 became the tenth person to build a working reactor. In addition to Fusor.net’s role as an information clearinghouse, the forum has become the de facto verification body for claims of amateur nuclear fusion success.

Fusor.net’s fusioneers list has three levels. Scroungers are just starting out, gathering components and/or assembling parts. Plasma Club membership requires evidence of plasma production. Neutron Club applicants must provide rock-solid proof of fusion in the form of images and a full data disclosure regarding setup, conditions, and neutron-detection systems. “Many of the people who get the idea to build a fusion reactor have that long-shot sci-fi edge,” Willis says, but the technical challenges quickly weed out those who aren’t serious about mastering nuclear theory and engineering. “You can’t fake your way into the Neutron Club,” says Willis.

“Where people usually fall short is in their neutron-detection methods,” says Hull. There’s a lot of back-and-forth questioning and answering, which serves as an informal but tough peer-review process.

Taylor added his name to the Scroungers list soon after Willis, who helps administer the Fusor.net site, suggested that Taylor build a fusor. Taylor became an increasingly frequent presence on the site’s technical forums. “Everyone was incredibly generous and willing to give advice and let me bounce ideas off them,” Taylor says. “There’s not too many sources of know-how for some things, like vacuum issues, for instance. Vacuum is almost a black art; I mean, who goes to school for it?”

But at first, none of the forum contributors had any clue that they were communicating with a twelve-year-old.

Read the 2012 PopSci story, “The Boy Who Played With Fusion,” and/or get the book.