A Sleek Digitally Augmented Router Offers “Autocorrect For Your Hands”

The Shaper, now reimagined by an ex-Google designer 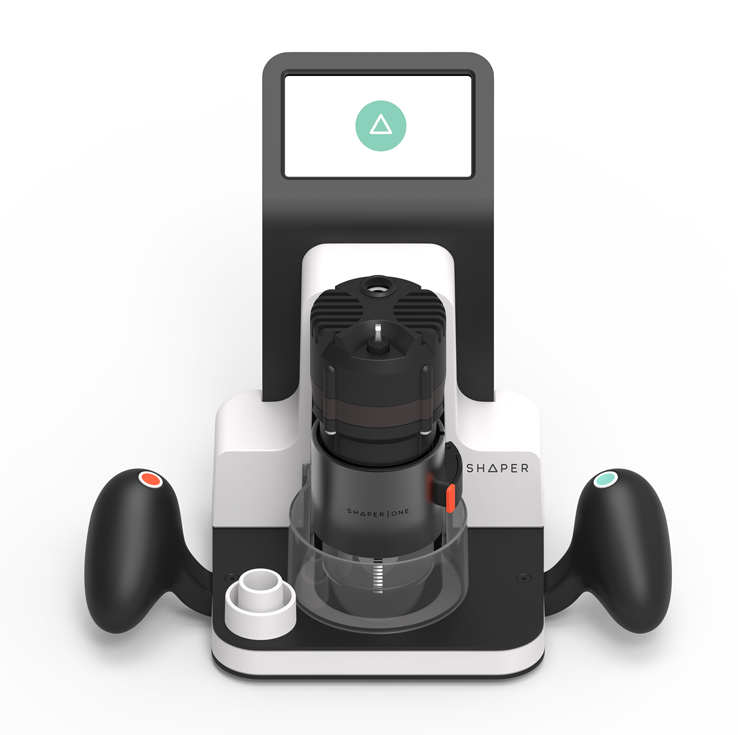 Last year, Alec Rivers, a recently minted computer science Ph.D. from MIT, had a problem. He and his co-founder Ilan Moyer had created a digitally augmented power tool and planned to sell it through their company. After drawing a shape in third-party graphics software, a would-be carpenter could push the tool over a piece of wood, plastic, or even brass. Using computer vision software, the tool would automatically adjust the path of the cutting bit to match the digital image, amending the line to within a hundredth of an inch. The team liked to think of it as “autocorrect for your hands.” But the tool didn’t look quite sharp enough for the consumer market, and had a funny name: Taktia.

“Taktia looked cool, but you couldn’t tell what it did from looking at it,” says Rivers.

So Rivers turned to an industrial designer named Matty Martin. Martin had worked for Google for three and a half years as something of a boy wonder, but wanted to try his hand at a startup. He also did woodworking as a hobby, making him a natural fit.

After months of spitballing with the two co-founders, Martin tried to re-imagine Taktia in terms of certain design principles: simplicity, approachability, and openness. Good design, he says, emerges naturally once you understand the core function of the product: in this case, an autocorrecting cutting tool.

“[As a designer,] you’re trying to figure out what makes a product special, what it’s doing,” says Martin.

After countless iterations, the team settled on a final design and rushed to finish a prototype to debut at the Bay Area Maker Faire in late May. (They were still finishing up the day before.) But in the end, Martin had replaced the clunky yellow Taktia router with a sleek, black housing and a screen embedded solidly onboard. And the tool had a new name that more directly described what the tool did: Shaper. For Martin, the handles and subdued coloring achieved his goals of making the tool more open and approachable.

“If you look at some of the major power tools on the market, they’re kind of scary,” says Martin. “Shaper’s not quite like a toy, but it’s almost the same feeling. The handles just say, ‘Hey, pick me up.'”

“We’re trying to tell a story with design. There’s a back region with the ‘brains,’ and a front region where cutting things are happening,” says Rivers.

Back in 2011, Rivers was still a grad student. He decided he wanted the precision of a $10,000+ computer-aided CNC woodworking router — but in a device that was portable and affordable to hobbyists. So his first version of “Taktia” allowed users to push the cutting blade along a pattern — but only along one axis. Nice cutting tool, but lacking in the precision and ease of use of an industrial CNC machine.

So with the hardware expertise of mechanical engineering graduate student Moyer, Rivers’ created software that works as a kind “tool GPS.” As with a full-sized computer-aided CNC router, the user creates a design in software. Then computer vision algorithms learn and navigate a map of the piece of wood or other material as the tool cuts.

What makes the tool special is its application of a technique called “3-D pose estimation.” Varied domino patterns taped onto the cutting surface serve as a map that the tool memorizes. Then, as the cutting bit moves along the surface, the computer vision algorithms do real-time analysis of 2-D images taken by the tool’s camera and estimate where it is in 3-D space on the memorized domino map. The user gently pushes the tool according to the desired shape, and Shaper instantly corrects the motions to within 1/100 of an inch, across multiple axes.

“The computer vision stuff was a ton of work, but it’s not actually all that novel in terms of a technology. People have done similar kinds of things before,” he says. “It’s our application to the idea of the digitally augmented power tool of the human and the tool working together, that’s where most of the novelty is.”

And having the algorithms provide the fine cutting “brains,” and the human provide the brawn, allows Shaper to offer the precision of a $10,000 CNC machine — but the portability of a power saw. (The range of CNC machines is limited by the size of the bed into which one fixes the wood). Shaper can work anywhere the craftsman applies the domino tape, even places where the surface-to-be-cut is embedded, such as walls or floors. 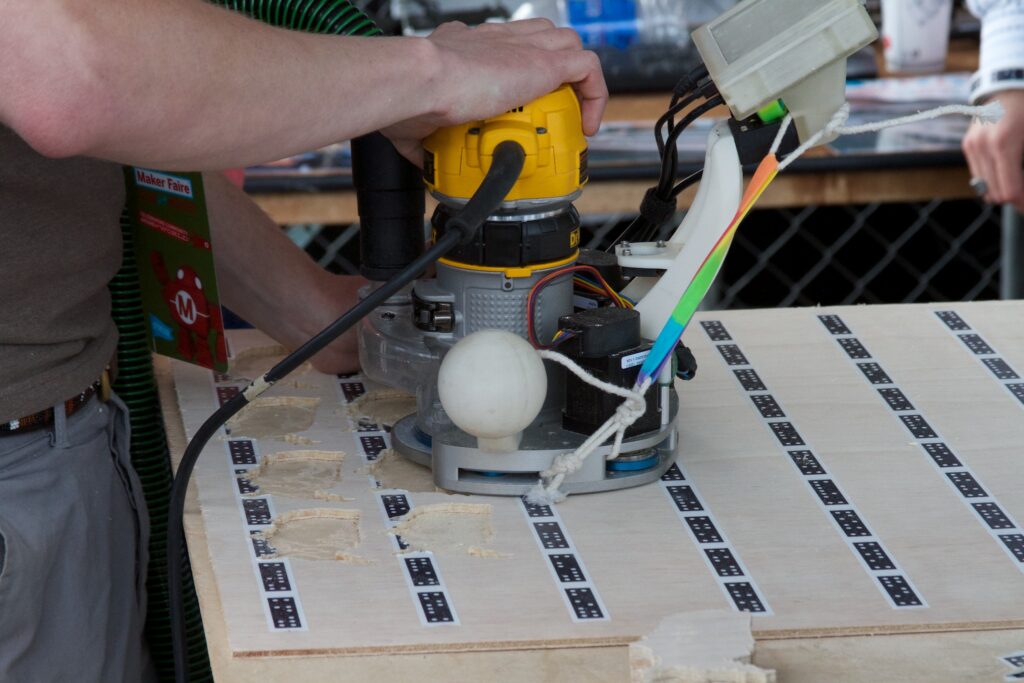 It uses machine vision software and onboard motors to “autocorrect” the carpenter as he pushes the cutting bit.

Who Will Buy It?

Still, as a small company with just one product, the guys at Shaper wonder just who will pay for such a tool.

“We don’t know what’s ultimately going to be the killer app,” says Rivers. “We know makers do a little bit of everything. We want to sell it to makers and see what they do with it. And then tack from there.”

The team had originally planned a crowdfunding campaign for the summer. But instead they will launch an open beta version, accessible from the company website, with the goal of gathering user feedback. Rivers wants to figure out just what the market is for a sub-$1,500 digitally augmented power tool — is this something just for hobbyists, or a tool that professionals will want to buy?

Market research can hold its own surprises. Before visiting a woodworking group in Minneapolis, Rivers assumed his audience would be impressed by his demo of Shaper cutting tiny replica of the United States out of plywood.

“When we showed them how it can cut the U.S.A., they were like ‘OK, fine. But can it do a straight line?'” Rivers says. “Then we cut a perfect straight line, freehand, with no guide, and they lost their shit. One of the guys picked up the piece of wood and ran around the office saying ‘look at this, look at this!'”